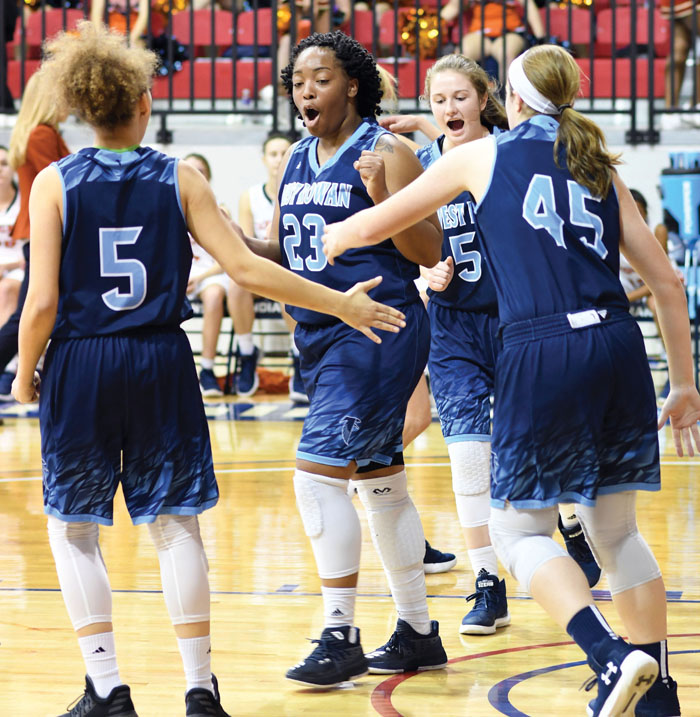 MORGANTON  —  The Freedom Patriots gym is a daunting place to enter, with state championship photos and plaques everywhere — including five crowns for girls basketball.

West Rowan coach Ashley Poole saw her team getting wide-eyed from the start. She preached focus, but the Falcons still started shakily after the long bus ride up Interstate 40.

“We came out in a zone defense, we weren’t moving very well, and then we’re down 16-4 right away,” Poole said. “But when we picked them up man-to-man, we found the focus and we found the effort we needed.”

West came back from that early hole and won going away, 67-55. It was a stunning victory over the No. 3 seed by  the 19th-seeded Falcons (21-7), who have regrouped in the 3A state playoffs for two road wins after being mauled by Carson by 30 points in a North Piedmont Conference Tournament semifinal.

West had a strong win at Parkwood in the first round, rallying late, and followed it up at Freedom. Two lengthy trips in three days didn’t seem to bother the Falcons.

“We were really good defensively tonight, and that was everybody that we put out there,” Poole said. “For a long time, we were just kind of hanging in there with them, but we kept fighting and we never lost our poise.”

But the Falcons owned the fourth quarter, outscoring the Patriots, 25-11.

“We got ahead with four minutes left and decided to slow it down,” Poole said. “Then we did a good job of finding lanes to the basket. We kept driving, kept getting fouled, and we kept making free throws.”

Senior Egypt Alexander was 7-for-8 at the foul line in the fourth quarter and led the Falcons with 22 points. Sophomore Abigail Wilson scored 19.

“We just kept attacking the post with those two,” Poole said.