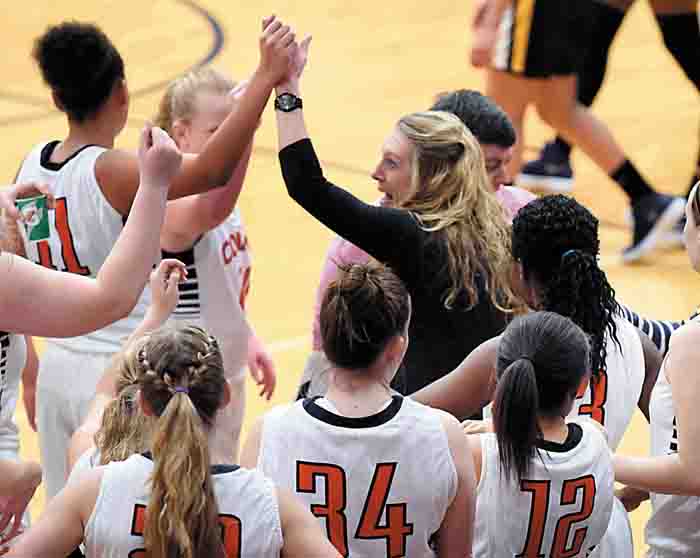 Carson's girls basketball team and Coach Brooke Stouder advanced to the 3A state playoffs' third round with a win over Robinson on Thursday night. File photo by Wayne Hinshaw for the Salisbury Post

CONCORD — It was a game of runs.

Carson’s girls had the longest and most important one, a 20-5 spree to finish the first half. Carson surged from down seven to up eight and led Robinson, 28-20, at the break.

Tenth-seeded Carson eventually prevailed, 59-45, in the second-round 3A state playoff game, although it was tougher than it sounds.

“That run in the second quarter was just huge,” Carson coach Brooke Stouder said. “We had an extremely slow start, playing zone. We were concerned about Robinson’s size advantage. so we started out zone, but we just weren’t moving well. When we switched to man-t0-man, it helped us. That got our offense going and we started scoring in transition. That’s when we got on that run.”

Nothing went right in the second quarter for South Piedmont Conference champ Robinson, the seventh seed. Point guard Jada McMillan got her third foul and shooter Jayda Glass went down for a while with an injury.

Robinson never found its shooting touch, going 3-for-20 on 3-pointers and shooting 27 percent from the field for the game.

Carson’s floor leader Olivia Gabriel had a tough shooting night (4-for-21), but she made up for it with eight assists and 9-for-13 free-throw shooting. She scored 17.

Carson (25-3) got massive games from freshmen Colbie Perry and Ellie Wilhelm. Perry made five 3-pointers for 15 points and pulled down seven rebounds. Wilhelm shot 7-for-14 with two 3-pointers and scored 16. She also had eight rebounds.

“Those two are shooting with confidence right now,” Stouder said. “Ellie just had a great all-round game, scoring inside and outside. She does a lot of things well and she can finish inside.”

Carson led 44-36 after three quarters and Gabriel was able to control the ball in the fourth quarter and finish off the Bulldogs.  McMillan fouled out.

“We had a lot of people that did good things,” Stouder said. “That was a tough game. Robinson plays  hard, and they hurt us with their rebounding.”

McMillan scored 12 for the Bulldogs (16-11). Jakiah Misenheimer had 12 points and 10 rebounds. Sierra Davis had 15 rebounds.

Carson has broken the school record for wins and is in the third round for only the second time. The 2012-13 Cougars beat West Rowan and Robinson before losing to Harding in Round 3.

“When this is all over, we’re going to have a lot of things to celebrate,” Stouder said. “But right now, we’re just thinking about finding a way to win the next one.”