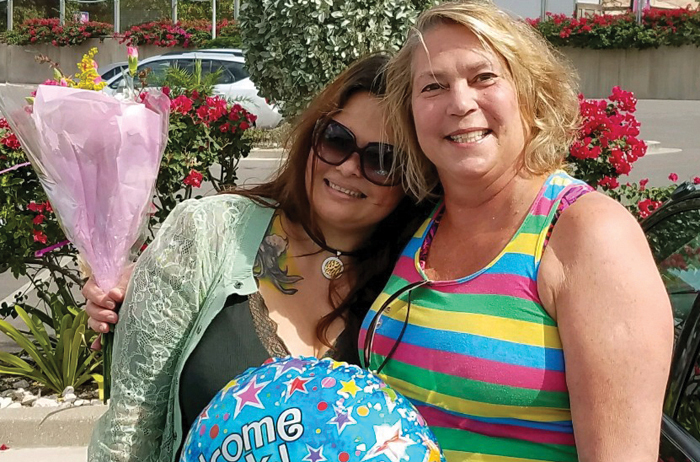 SALISBURY — The hospital room in Curacao held beds for six women. The windows and sliding door were open to the outside. The overhead fan was dirty, and a bird flew in daily looking for crumbs, though there really wasn’t much to eat.

In a hospital bed next to Susan Linza, artist Giselle Vargas Melean would sketch and paint the bird on its visits. Giselle also interpreted the Dutch and Spanish being spoken around Linza and shared with her the food being brought in by friends.

Linza’s 2016 anniversary cruise in the southern Caribbean had been cut short when she suffered a compound fracture to her left ankle. It meant leaving the cruise ship after it had docked in Curacao, having surgery in a island hospital and spending five days of recovery in the bed next to Giselle.

Linza’s husband, Gary, visited often, but it was Giselle who made those five days bearable and manageable.

“I call her my guardian angel,” Susan Linza says today.

Giselle was in the hospital dealing with necrosis, a disease that has disabled her and continues to worsen. The artist is now in need of a major operation, which will have to be done in Columbia, not in neighboring Venezuela, because of the continuing civil unrest in the latter country.

“She has drastically gone downhill,” Linza says. “She needs the operation so badly.”

Linza — long recovered and back home in Rowan County — has organized something to help her faraway friend.

Come March 8, from 5:30 to 8 p.m., Waterworks Visual Arts Center will be home for a benefit art sale, the proceeds of which will assist Giselle Vargas Melean.

For sale will be 35 paintings, most of which are by Giselle. A few others have been donated for sale by her artist friend, Pedro Linarez.

“I am a good person,” Giselle has said in her conversations with Linza, “and I ask God for the strength I need to endure this.”

Giselle, 45, paints on Dutch and Spanish fabrics, which serve as cured, stretched canvases. Linza says they can last hundreds of years. They are resistant to humidity and finished with a matte varnish to guard against light and dust.

Susan and Gary Linza picked up the paintings this past December when they took another cruise that included a stop in Curacao. It was a joyful reunion with Giselle and her 20-year-old daughter, Gigi, who met them at the port.

“She fell into my arms, and we just cried,” Susan Linza says.

The Linzas and Giselle spent the day together, sightseeing, going to the beach, shopping at a mall and dining out at a Venezuelan restaurant. “Everywhere we went, she or her daughter knew somebody,” Susan says. “… Giselle is a very loving person.”

Because of her illness, Giselle hadn’t been to the beach in five years.

Giselle was a single mother who raised three children. Before her condition worsened, she supported herself through her artwork and by offering piercings and tattoos.

Her daughter wants to attend college, but she and Giselle can’t afford it now. Gigi sells Pandora jewelry to tourists getting off the frequent cruise ships.

Since Linza returned from her shortened 2016 trip, she and Giselle have kept in touch through telephone texts and the Whats App, a real-time messenger service. Last summer, as she learned of the need for an operation, Giselle asked Linza for assistance in selling her paintings.

“I said we would do whatever we can to help her,” Linza says.

At first, Giselle was trying to figure out how to ship the paintings, but Susan told her to wait after she and Gary booked the December cruise.

Linza has published and is distributing a brochure about the benefit art sale. She also is relying on friends, social media and conversation to spread the word.

When Linza returned from Curacao back in 2016, Dr. Robert Anderson performed some additional surgery that included removing two rods that had stabilized her ankle.

The ankle has recovered nicely, and Anderson credited the doctors in Curacao for doing the best they could.

As she was recovering from her surgery in Curacao, Linza was pretty much a prisoner of her circumstances. “Basically, I sat on my bed and cried,” she says.

It wasn’t until her fourth day in the hospital that a combination of a chair and PVC pipe was devised to allow Linza to take her first shower.

Giselle provided Linza with a bag of shampoo, conditioner, soap and other toiletries. When it came time to dry off, Linza learned no towels were available.

Giselle retrieved an oversized shirt from Linza’s bag to use as a towel, then she held up two of her own dresses.

“Which of these dresses do you like?” she asked Linza.

Susan chose a striped one, and it was that dress from Giselle that Linza was wearing when they reunited in December.

Giselle had another present for her new friend after their stay together in the hospital in 2016.

“Take this picture home of our bird,” Giselle told Linza.

On the back of the painting, which the Linzas have framed, Giselle wrote a personal message. It said, “Susan, never forgive me, and I’ll never forgive you.”

Giselle realized she had meant to say “forget,” not “forgive.” The women had a good laugh, knowing their friendship needs no translation.

A man and his machine: Inventor Penley made powder…