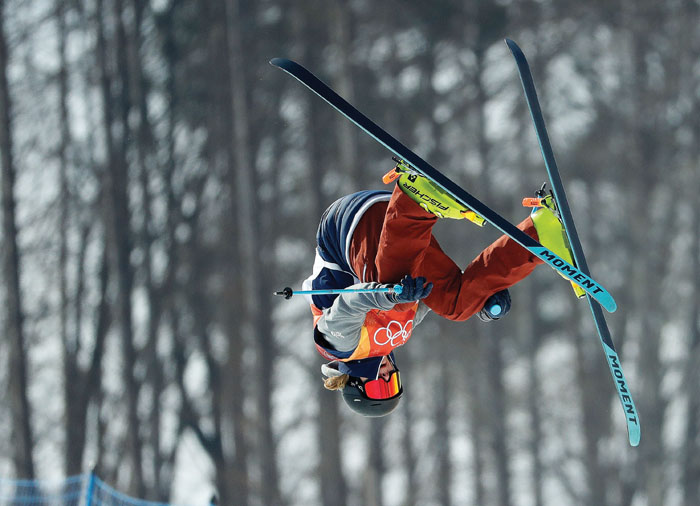 Freestyle skier David Wise successfully defended his gold medal Thursday, breaking through on his final run to give the U.S. its third gold medal in the halfpipe at the Pyeongchang Olympics.

Wise wiped out on his first two runs before sneaking past countryman Alex Ferreira on his third with a score of 97.20. Wise landed double corks in all four directions — front left, front right, switch (backward) left and switch right — a goal he set for himself entering these games.

It’s the seventh gold medal for the U.S. in Pyeongchang, five of which have come at Phoenix Snow Park. Chloe Kim and Shaun White won snowboard halfpipe gold last week, and Red Gerard and Jamie Anderson won at snowboard slopestyle.

The snowboard and freestyle skiing crews have picked up the slack for the U.S. team in these Olympics. Those competitors have accounted for 10 of the country’s 19 medals, many of them at the snow park located an hour away from the Gangneung Olympic Plaza.

Ferreira took silver, and 16-year-old Nico Porteous from New Zealand got bronze. It was the second medal of the day for the Kiwis after snowboarder Zoi Sadowski Synnott won bronze in big air to end New Zealand’s 26-year Winter Games drought.

Porteous momentarily pushed past Ferreira for the top spot with his second run, shocking even himself with a score of 94.80. His jaw dropped and he pumped his arms when it was announced.

Porteous finished 12th at least year’s world championships and ranked 11th in qualification. His brother, Miguel, won silver in the halfpipe at the 2017 X Games.

Porteous didn’t even bother trying on Run 3, cruising through the halfpipe without a trick and waiting at the bottom for the other competitors.

Ferreira stormed past Porteous on his second run. The 23-year-old American spun his right ski pole over his head at the bottom of the halfpipe, then threw up his hands when the judges gave him a 96.00.

Wise put down his double-cork dream run a few minutes later, and Ferreira could only counter with a 96.40.

Wise had a big cheering section of family and friends at the bottom of the halfpipe, and most of them had “David Wise” drawn on their faces. Wise’s sister, Christy, is an Air Force rescue pilot who lost a leg in a paddleboarding accident in 2015, and Wise is giving 10 percent of all his earnings this season to a foundation he and his sisters created: One Leg Up On Life.

The Americans had eyed a podium sweep in the halfpipe, with Torin Yater-Wallace and Aaron Blunck also among the favorites. Yater-Wallace failed to complete a clean run, including a gnarly crash midway through his third try, and finished ninth. Blunck’s best effort was an 84.80 on his final run, good for seventh.