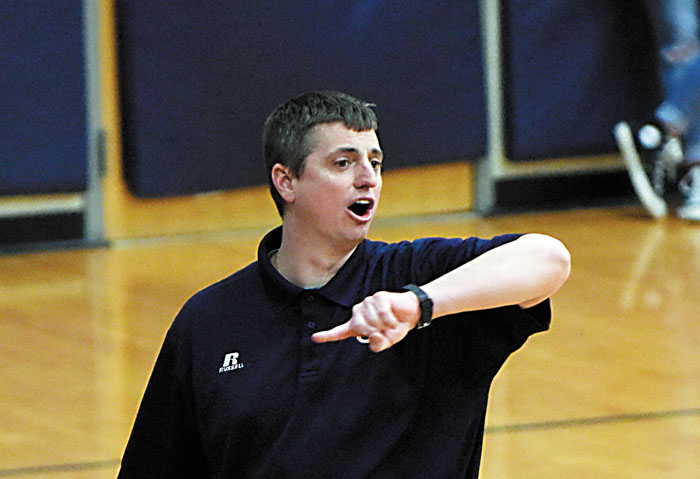 The Cougars could have folded and put their magical season to bed Thursday night, but instead remained unruffled and tossed aside visiting Hunter Huss, 87-71, in a second-round state 3A playoff game.

“We played like it was our last game,” senior Jailen Williams said. “Our seniors — no, all of us — are still hoping to go out with a bang.”

Williams helped Carson (25-2) win its 10th straight game, improve to 12-0 at home and earn a third-round skirmish at home Saturday against Charlotte Catholic. He scored a career-high 30 points, including the 1,000th of his career on a 3-pointer from the top of the key early in the second half.

“I was so blessed to have coached Tre Williams,” coach Brian Perry said of the older brother. “And then to have Jailen come along was just another one. He’s made us go all year long. I don’t know if people understand that all those threes that Owen White hits, that Cam Prugh hits, they all come from Jailen penetrating and kicking it out. Yeah, he’s scored a thousand points, but he’s accounted for over 2,000.”

When Williams wasn’t driving to the rim for scoop layups, he stayed busy doing the dishes — feeding White (24 points) and Jamarius Hairston (20) with pinpoint passes. On a team that lives on the perimeter, White was the landlord, knocking down six of Carson’s 11 3-pointers.

“It’s mostly my teammates,” White said afterward. “They get me open shots. Jailen and Jamarius are so good at driving the lane and kicking it out.”

Carson trailed in the early stages and fell behind, 21-15, when 6-5 Huss senior Jahleer Black (24 points) made a layup early in the second quarter. But the fourth-seeded Cougars stayed calm, stuck to the blueprint and took their first lead when Williams hit a 20-foot splashdown that made it 25-22 with 5:23 remaining in the half. Teammate Cole Perry’s offensive rebound and put-back at the buzzer helped them jog off the court with a 37-31 halftime edge.

“Being seniors, we try not to fold when it gets hard,” said Hairston. “We band together during tough moments. I think that comes from playing together for so long and having each other’s back through anything and everything.”

Williams owned the spotlight in the second half. After completing the first half stuck on 999 career points, he scored another 18 and was momentarily recognized after his 3-ball stretched Carson’s lead to 46-37 with 4:59 left in the third period. It came, appropriately, on drive-and-kick by Perry.

“I was letting the game come to me,” Williams said. “I wasn’t trying to force anything. I felt the opportunity would come as long as I didn’t rush it. Cole threw me a great pass and I felt it right away.”

Everything felt different after 13th-seeded Huss opened the fourth period with a 10-2 flurry and trimmed what had been a 16-point deficit to 65-62. Coach Perry wisely called a timeout with 6:13 remaining.

“In the huddle, Coach told us to keep our composure,” Hairston explained. “We knew they weren’t going to lay down and quit, but we needed to re-focus.”

White took matters into his own hands. Just seconds out of the timeout, he took a pass on the left side, pump-faked a defender into the air and calmly drained a 3-pointer that provided a six-point lead. As the crowd thundered its approval, the Cougars initiated a 22-9 finishing kick — playing the rest of the game like a cat spying another mouse, visibly confident, as if they already knew the outcome.

“I thought we had them on the ropes,” said Huss coach Walter Wallace. “Then Owen hits a three with a hand in his face. We did everything we had to do and there we were, down six points. Can’t be too upset about that.”

Hairston noted that White “works on his craft every day,” while Williams indicated, “Over the years, he’s learned to create his own shot off the dribble. He incorporated that tonight.”

White, meanwhile, shrugged it off like he’d just gone to the dentist for a cleaning. “Hey, if you’re going to shoot it from that far out, you might as well get your money’s worth,” he deadpanned.

Wallace had nothing but praise for Carson and its army of sharpshooters after the Huskies — winners of 16 of their previous 18 games — finished 18-9.

“Not a single thing surprised us,” he said. “It’s like the Green Bay sweep — they told us what was coming and said, ‘Go stop it.’ We just couldn’t. They have so many weapons. It’s like you stick you finger in a dike and another hole pops up somewhere else.”