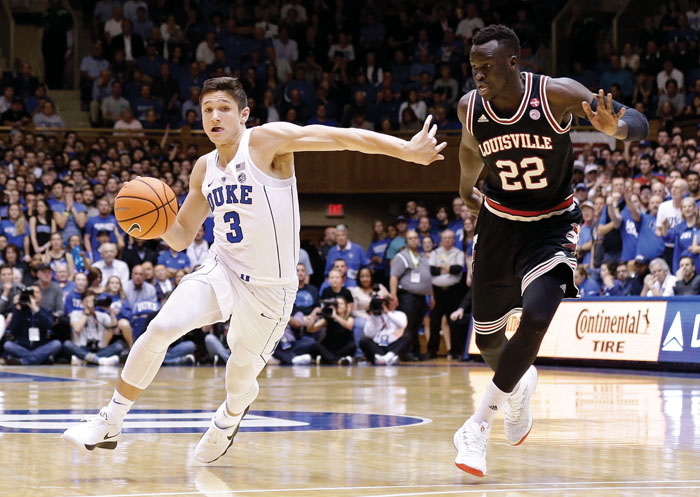 AP Photo/Gerry Broome Duke’s Grayson Allen (3) dribbles while Louisville’s Deng Adel (22) defends during the first half of last night’s game in Durham. Allen scored 28 points to lead the Blue Devils to an 82-56 victory.

DURHAM (AP) — Grayson Allen took care of the scoring for No. 5 Duke. Everyone pitched in at the other end of the floor.

A 2-3 zone — of all things — has the Blue Devils playing perhaps their best defense of the season.

Hall of Fame coach — and noted man-to-man disciple — Mike Krzyzewski says the zone defense works with this group because it gets his young players talking to and moving with each other.

“We have length, and we have fairly good lateral movement from each kid,” Krzyzewski said. “It may be that having an area allows this group to talk more than if they have a specific offensive situation and man. … No question, we talk better, and Grayson’s kind of able to lead us better.”

Louisville’s previous scoring low was 57 points against Purdue, but interim coach David Padgett came away impressed by the Duke defense.

“In a short period of time, they’ve turned it into a major defensive weapon,” he said.

Ray Spalding scored 17 points, and V.J. King and Deng Adel had 10 apiece for Louisville (18-10, 8-7), playing for the first time since an NCAA panel upheld sanctions against the program in the wake of its embarrassing sex scandal — which cost the school about $600,000 in tournament revenue, 123 victories and its most recent national championship.

The Cardinals were taken out of this one early by a Duke team that shot 48 percent, hit nine 3-pointers — with Allen responsible for six of those — and pushed its lead into the 20s with a 26-6 run midway through the first half fueled by a pair of Allen 3s.

“We kept at it. Early in the year, we got a lead and we got comfortable,” Allen said. “Today, we made it a point to, if we get a lead, make it bigger.”

Louisville: It’s certainly been an eventful 48 hours for the Cardinals, with former coach Rick Pitino saying the school should consider legal action against the NCAA for making Louisville vacate its 2013 national championship. On the court, the Cardinals’ two-game winning streak ended abruptly amid Allen’s hot shooting and their own scoring struggles against that Duke zone. Now comes a trip to Virginia Tech, a home game against top-ranked Virginia and a season-ending visit to N.C. State.

“We’ve just got to focus on what the goal at hand is,” Padgett said. “We can’t just say, ‘Oh, well, it’s too tough. We’re not going to try.’ We’ve got to dig in and give it everything we have.”

Duke: The Bagley saga figures to linger into a third week after the presumptive one-and-done freshman missed his fourth straight game with the injury he suffered Feb. 8 in the loss to North Carolina, and Krzyzewski says he’s day-to-day.

As was the case in each of the past three, the Blue Devils didn’t need the ACC’s top scorer and rebounder — not with Allen reaching the 20-point mark for the third time in that stretch — to remain a half-game ahead of the rival Tar Heels in the race to finish second to No. 1 Virginia in the conference race.

Allen finished with his highest-scoring performance since he scored a career-best 37 points in the victory over No. 2 Michigan State in November. He finished 10 of 20 from the field and took 15 of his team’s 26 3-point attempts.

Even some of Allen’s missed 3s led to points for Duke. The prettiest play of this one came with about 9 minutes left in the half. Allen fired up a 3-pointer that bounced high off the iron, and Javin DeLaurier swooped in for a follow-up dunk that gave Duke a 23-15 lead. Two possessions later, DeLaurier followed up another missed 3 by Allen with a stickback dunk that pushed the lead into double figures for the first time.

Louisville: At Virginia Tech on Saturday.