Salisbury boys top Bunker Hill, 68-51, to move on in playoffs 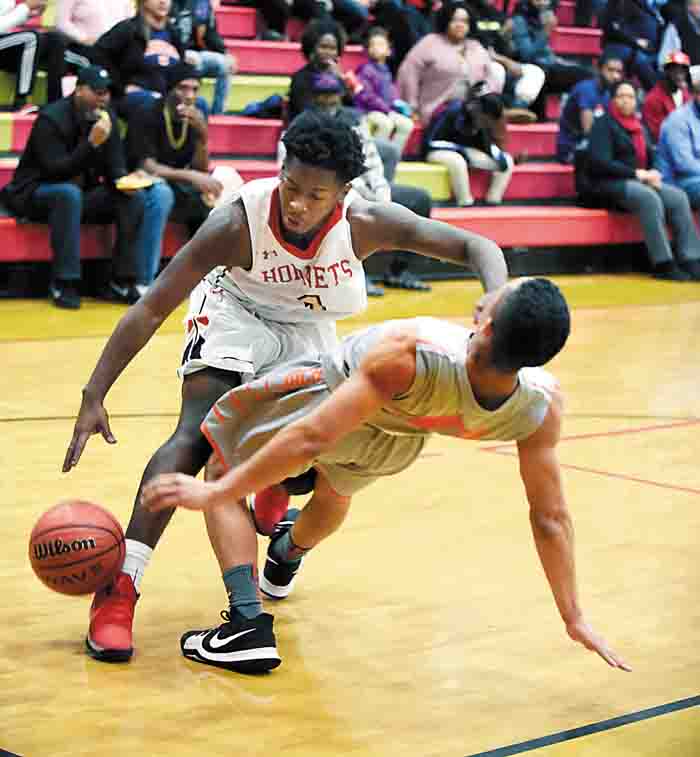 SALISBURY — The Salisbury boys committed a lot of fouls in their opening game win in the state 2A playoffs Tuesday night, but that was okay with head coach Bryan Withers.

“With our kids, the effort is there,” Withers said, after a solid 68-51 win over visiting Bunker Hill. “You have to accept some of that (fouls) because we are so aggressive out there.”

That’s the way Withers likes it.

The Hornets (24-3) were whistled for 23 infractions including 13 in the first half but a 17-6 run to end the second quarter provided Salisbury all the margin it would need to advance.

The Bears (13-13) out of Claremont stayed close in the early going but ultimately had no response for Salisbury’s aggressive defense, sheer speed and superior depth. Bunker Hill managed just 5 field goals in the first half but stayed close thanks to  hitting 14 of 19 free throws. They finished the game connecting on 20 of 32 foul shots.

“Our defense was really there for us all night,” Withers said, “If we can limit teams to a bunch of free throws, we are going to be fine.”

Salisbury was up by six points, midway in the second quarter, when the offensive explosion came that provided some breathing room. Back-to-back three-point bombs by Elijah Moss started the run, then guard Jaquan Davis hit a layup, followed by a quick steal and another bucket to make the score 39-29. Trell Baker connected on a long 3-pointer, then Cameron Gill stole the ball and and scored at the buzzer.

The dagger surge put the Hornets up, 40-25, at intermission, thanks to a 24-point second period.

“All the coach wants us to do is hustle and play defense like we did tonight,” Davis stated. “When we play good defense, it helps us a lot on offense and leads to good things. I just want to win.”

One of the truly good things the Hornets enjoyed in the contest was superior team depth, as all 14 players got into the action and 10 of them scored. With early foul trouble to big man Bill Fisher and sharpshooter Oshaun Robinson, Salisbury received major contributions off the bench from junior post player Brennan Bailey (6-4), forward Jahbreel Russell (10 points) and guard Xavier Kesler.

Bailey especially impressed his coach with seven points and some key rebounds against a big Bunker Hill interior.

“Bailey stepped up big time for us and gave us some quality minutes,” Withers said. “He can post defend like crazy.”

Salisbury expanded their lead to 20 points, 52-32, on a rebound follow shot by Russell in the third quarter. Bunker Hill could get no closer than 17 after that, as point guard Baker directed a keep-away strategy to use up clock down the stretch.

The balance of the Hornets showed in the scoring column as Russell was the only player in double figures. But Baker and sharpshooter  Moss added nine each points, followed by Cam Gill and Kesler with eight each. Bailey, Davis and Fisher chipped in seven points each.

The Bears, out of the Northwestern Foothills Conference, were lead by 6-5 senior center Chandler Cummins with 14 points and wing Christyan Murray with 12.

“They were so much bigger than we expected,” noted Withers, “So we had to use our speed and pressure to take control and get the win.”

The fourth-seeded Hornets will enjoy another home playoff game this Thursday when East Rutherford (19-9), out of Forest City and the Southwestern 2A Conference, comes to Salisbury. The 20th-seeded Cavaliers edged Belmont South Point last night, 82-78, to advance. Game time is likely set for 7 p.m., but will be confirmed later today.