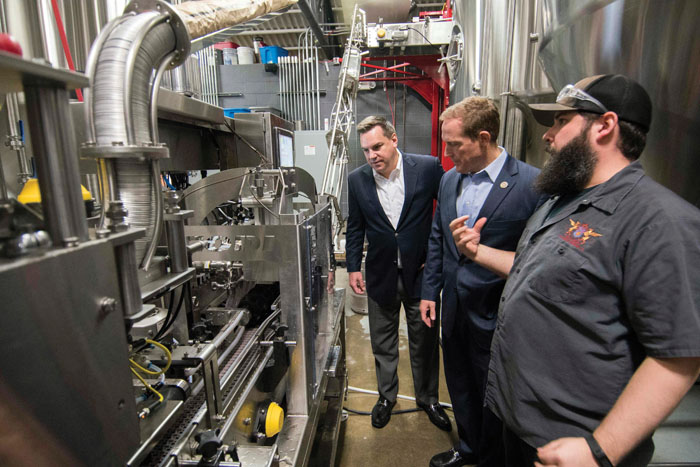 “As soon as we heard that the tax cut was going to come through, we started planning,” said Moscardini. “… As soon as it actually cleared, we pulled the trigger. We’ve been interviewing some people, and they’re actually starting in two or three weeks.”

U.S. Reps. Ted Budd and Richard Hudson joined New Sarum owners and employees to celebrate that growth Tuesday afternoon with a tour of the brewery.

Hudson represents the 8th Congressional District, which includes Montgomery, Stanly, Moore, Cabarrus and Hoke counties and parts of Rowan and Cumberland counties. He said the benefits of the tax bill are being felt by 90 percent of American workers and small businesses.

“The has had a big impact here on one of our local employers,” Hudson said. “We got a chance to see firsthand what they’re doing with the money. They’re saving in taxes. They’re reinvesting it back in the business.”

“Not only are they hiring more people here, they’re also extremely efficient when they’re doing it,” he said. “They can run about 55 cans a minute in here, going up from 30. They’re increasing productivity, hiring more people and selling more right here in Salisbury.”

New Sarum started brewing in a small office space next to Salty Caper on Lee Street. It later expanded into the old Salisbury Tractor building, located behind the Gateway Building.

Now, those previously empty four walls are filled with a taproom and brewery. Brewmaster Andy Maben said the company has plans to reach the beach with distribution by the end of the year.

Budd and Hudson both said such growth is happening nationwide, and its already helping to offset the estimated $1.5 trillion deficit that the bill will create over 10 years.

Every 0.1 percent of growth in gross domestic product leads to $300 billion in revenue, said Budd.

Hudson said the business growth is already happening at a rate that should more than offset the deficit, citing the growth of more than 400 companies nationally, including Lowe’s Home Improvement, BB&T, Wells Fargo, Apple and Starbucks.

“We’re already seeing activity, frankly faster than I thought we would,” Hudson said. “It’s only going to continue to grow as you see … those people want to reinvest back in their employees.”

Political notebook: Lawmakers tasked with action rather than ‘thoughts…