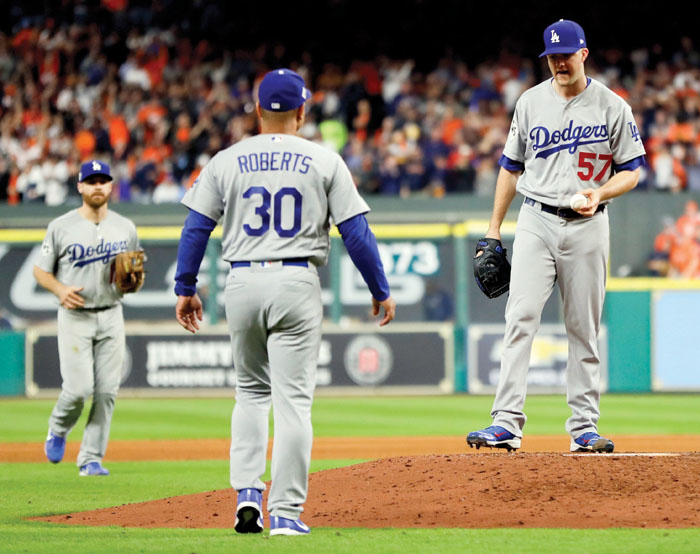 FILE - In this Oct. 18, 2017, file photo, Los Angeles Dodgers manager Dave Roberts walks out to pitcher Alex Wood during the sixth inning of Game 4 of baseball's World Series against the Houston Astros, in Houston. Major League Baseball is imposing stricter limits on mound visits in an effort to speed games but decided against 20-second pitch clocks for 2018. The new rules announced Monday, Feb. 19, 2018, include a general limit of six mound visits per nine-inning game without a pitching change, whether by a manager, coach or player.(AP Photo/Matt Slocum)

GLENDALE, Ariz. (AP) — Managers or coaches must make a pitching change if they head to the mound for the seventh time in a game under baseball’s new pace of play rules.

Commissioner Rob Manfred and executive Joe Torre explained some of the parameters Tuesday, one day after MLB imposed stricter limits on mound visits in an effort to speed up games.

“I don’t see pace of games issues as harsh or not harsh,” Manfred said during his annual visit to the Cactus League. “I see them as a fan friendly issue.”

Torre noted that umpires will keep players from proceeding to see the pitcher if six mound visits have already occurred.

“Because it’s a fan issue at the end of the day, I hope it’s an issue that you will be able to find common ground with all the constituents in the game moving forward, because it is after all the fans that makes the engine known as Major League Baseball run.”

MLB has the right to institute rules changes absent an agreement with one year notice and made proposals during the 2016-17 offseason for a pitch clock and more restrictions on mound visits.

Giants catcher Buster Posey noted that it’s the players’ jobs to move forward as the game adapts, whether they like the decisions or not.

“I actually was listening to John Smoltz talk about it and I agree with what he was saying. He says as baseball players you adjust,” Posey said last week. “No matter what it is, you adjust. I think it might affect a few people, but they’ll adjust. If it affects me, I’ll adjust. I don’t foresee it being an issue. For me personally, baseball being my job, my job’s to go out and perform with what I have. That’s kind of the way I approach it. I think ultimately though if you’re looking at it from a fan’s perspective, you want to put a product on the field that they’re going to enjoy the most.”

Cubs manager Joe Maddon joked of having a coach keep track of the mound visit similar to the way an assistant basketball coach tracks timeouts, saying “maybe there’s going to be seven on the scoreboard like the number of timeouts in a game.”

“Our numbers suggest that we were a little over four, something like that,” Oakland manager Bob Melvin said. “You’re just going to have to have an awareness. You’re going to have to deal with it. A month or two for now maybe it’s a non-issue at some point. There’s no sense in fighting it, being combative about it. Just figure out a way to try to make it part of your routine because it’s a very routine sport.”

“At the end of the day we want players signed, we want the best players playing the game,” he said. “It’s always our goal.”