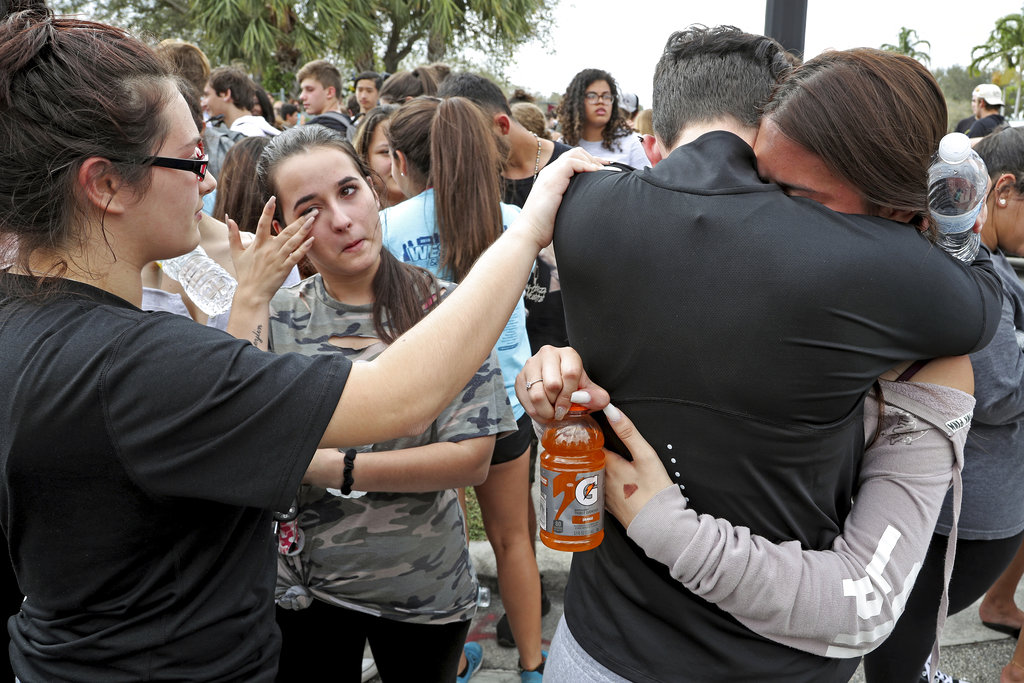 West Boca Raton Community High School students hug after reaching Marjory Stoneman Douglas High School on Tuesday. Hundreds of students walked out of the school and made their way to the site of a school shooting about 10 miles away in a show of solidarity for bringing an end to gun violence. (Amy Beth Bennett/South Florida Sun-Sentinel via AP)

When people act like cretins, should they be ignored? Does talking about their misdeeds merely give them oxygen?

Maybe so. But the sliming — there is no other word for it — of the survivors of last week’s Florida high school massacre is beyond the pale.

Here is the often-appalling pundit Dinesh D’Souza, outright mocking the students at Marjory Stoneman Douglas High, after they showed their disappointment in a state legislature vote on assault weapons on Tuesday: “Worst news since their parents told them to get summer jobs.”

Recall for a moment: These are teenagers whose friends were brutally murdered less than a week ago.

D’Souza, who has a huge social-media following precisely because he sinks so low, so often, also tweeted out his cynical scorekeeping: “Adults: 1. Kids: 0.” And he took a shot at what he called their “politically orchestrated grief.”

(D’Souza’s tweets went viral, and, under attack, he backed off a few steps Wednesday morning, with an apology that said he was only trying to blame the news media. It sure did not sound that way at the time.)

But there was far worse out there. Emma Gonzalez, the Douglas High student who made an impassioned speech last week, became the object of the worst kind of racism and sexism.

One Twitter user called her a “brown bald lesbian girl” — disparagement that got some approval from a state legislator’s aide, the same aide who was fired Tuesday for telling the Tampa Bay Times the students were paid and coached actors.

“Both kids in the picture are not students here but actors that travel to various crisis when they happen,” wrote the aide, Benjamin Kelly, speaking of Gonzalez and David Hogg (whom I interviewed last week).

That was, of course, a lie.

But the conspiracy theory had already spread far and wide: “This chick was coached,” echoed one Twitter user. “Democrats used an innocent girl as a pawn.”

The trashing of these students — whose determination and passion are nothing but admirable — removes a rock to reveal several varieties of maggots. One is the “say anything to get attention” crowd that sees nothing as beneath them. You know their names.

Another, though, are those whose shameful reaction has an undercurrent of fear. These students seem to have the potential to create actual change.

It may turn out to be meaningless that President Donald Trump is talking about banning bump stocks, the devices that can boost the firing rate of semiautomatic weapons. But he is reacting to the students’ powerful messages and their passionate delivery, and that is notable.

Imagine the terror it must provoke in those who are so deeply invested in the corrupt status quo.

D’Souza’s apology and the legislative aide’s swift firing suggest the wind is blowing in a new direction.

It would also be encouraging to see news organizations who employ those who spread lies taking some remedial action, too.

CNN, for example, pays former Congressman Jack Kingston, R-Ga., as a political commentator. Here is his point of view, as expressed in a tweet: “O really? ‘Students’ are planning a nationwide rally? Not left wing gun control activists using 17yr kids in the wake of a horrible tragedy? #Soros #Resistance #Antifa #DNC.”

A video suggesting Hogg is a paid actor was the top trending video on YouTube Wednesday morning before it was, thankfully, taken down. Scores of other conspiracy-mongering videos littered the platform and gained traction on right-wing sites that regularly spread misinformation.

Legitimate disagreement over policy issues is one thing. Lies, conspiracy theories and insults are quite another.

Go ahead and make the case, if you can, that the Douglas students are wrong.

But get out of the gutter first.

How an aging Billy Graham approached his own death