How an aging Billy Graham approached his own death 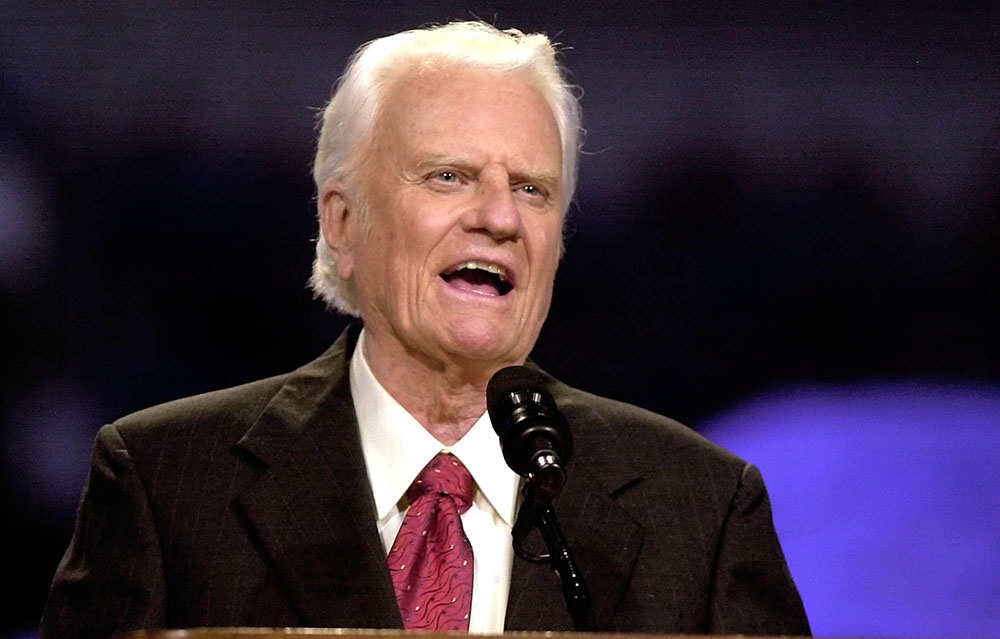 The Rev. Billy Graham speaks during the Mission Metroplex at Texas Stadium in Irving, Texas, on Oct. 17, 2002. (AP Photo/LM Otero)

Evangelist Billy Graham tackled the topic of death often and with surprising frankness for a man who made his living telling people the Good News of salvation in Christ. Graham died Wednesday at the age of 99.

When Graham preached, he said that death was, of course, inevitable. Since no one knew when Christ would return, he said, everyone should think instead about the sure thing they did know: the certainty of their own death. While some fundamentalists predicted that some believers would escape death in the Rapture, the evangelist repeatedly insisted that death fell on everyone.

In his homily for former president Richard Nixon’s funeral, he reminded the family and audience that someday every one of them would die: “John Donne said that there’s a democracy about death. ‘It comes equally to us all and makes us all equal when it comes.’ ”

Graham noted elsewhere that many people tried to avoid this inescapable reality by playing word games, by changing the title of a cemetery to a memorial park, for example. But he left them no loopholes. First, he said, “accept the fact that you will die.” Second, “make arrangements.” Third, “make provision for those you are leaving behind.” And finally, “make an appointment with God.”

Though believers would not escape death, they would face it with greater clarity. During his Las Vegas evangelistic crusade in 1980, the MGM Grand Hotel burned. “Someday, for all of you, if you don’t know God, the music will stop. It will all be over,” he said.

Critics who charged Graham with sentimentality were not paying attention. He was not a profound thinker or preacher, but he dealt with serious things in serious ways. And millions listened.

Death was one thing, the passing of time in the midst of life another. Once, when he was in his mid-60s, a teenager asked him what surprised him most in his “old age.” He answered without hesitation: “the brevity of life.”

The relentless march of events taught important lessons, too. “I urge each of you to invest your lives, not just spend them,” he told another group of young people. “Each of us is given the exact same amount of seconds, minutes, and hours per day as anyone else. The difference is how we redeem [them]. . . . You cannot count your days, but you can make your days count.” A good life and a good time were not the same.

Of course it was natural to fear death. Everyone did. But facing it squarely put life in a longer perspective. “The future is as bright as the promises of God,” he assured the faithful at the opening ceremony of his North Carolina retreat center, the Cove, in 1993.

What about thoughts on his own death? Until the later decades of his ministry, Graham seemed not to dwell very much on the subject. For one thing, he proved consistently outwardly focused. That outward orientation fostered a perennially sunny disposition, especially in public. “I don’t have many sad days,” he told Larry King.

Beyond that, Graham aged well. Into his 70s and beyond, he still cut a dashing profile. He fit the American media ideal of the seasoned man: tall, lean, blue-eyed, and blessed with a great mane of silver — later snow white — hair right up to the very end.

Many compared Graham with Clark Gable and Gregory Peck. Though prone to sniffles and accidents — a bit of a hypochondriac, his friends affectionately allowed — his work and travel schedule showed his amazing stamina, year after year.

But with time, Graham did slow down. Aging quieted his trademark machine-gun sermons into talks that seemed more like fireside chats. He readily admitted that he “yelled” less, and that he had come to favor less demanding indoor auditoriums over the outdoor stadiums that had propelled him to international fame.

The mature Graham mastered the art of poking fun at himself, even when it came to mounting infirmities. Grumping about his advancing age, he urged one late-life visitor, “Don’t get old, if you can avoid it.”

Yet serious illness took its inevitable toll. He collapsed while speaking in Toronto but climbed out of a hospital bed several days later to preach to a Sky Dome record crowd of 73,500 on the final night of an evangelistic crusade.

More significant was the Parkinson’s disease (later diagnosed as hydrocephalus). “You know what happens when you get Parkinson’s? Your handwriting gets illegible and your sermons longer,” he quipped. But his wife, Ruth Bell Graham, saw things more soberly. “This Parkinson’s is no laughing matter,” she judged. “Overnight he has become an old man.”

Graham told a friend that he was prepared for death but not for growing old.

Still, Graham soldiered on, year after year, until he preached his final evangelistic crusade in Flushing Meadows, N.Y., in the summer of 2005. Though others had to help him to the pulpit, the image of an old warrior of the cross, pressing far past the normal retirement age, help normalize the aging process for many and provided inspiration for millions.

As for his future, Graham made clear that he anticipated his demise as a door to a new life in heaven. “I’m looking forward to it — I really am,” he said in 1995, in his late 70s. “I’ll be happy the day the Lord says, ‘Come on. I’ve got something better planned.’ ”

To be sure, Graham admitted that he did not look forward to the dying process itself. He said he had seen “some of the terrible things that happen to people that are dying. I don’t want that.”

But beyond the event itself stood heaven as a place of glorious fellowship with the Lord, saints, loved ones and invigorating work to do. “Think of a place where there will be no sorrow and no parting, no pain, no sickness, no death, no quarrels, no misunderstandings, no sin and no cares.” The preacher even speculated about golf courses and beloved pets – whatever it took to make folks happy.

The journalist David Frost asked the mature Graham what he would want the first line of his obituary to say. “That he was faithful and that he had integrity,” he replied. “And that I was faithful to my calling, and that I loved God with all mind, heart and soul.” Frost wondered if Graham had questions he hoped to ask God in heaven. “Yes, thousands. Many things in Bible mysteries.” He then added, “Some things in my life I would be embarrassed if anyone else saw. I would like God to edit the film.”

If God needed to edit the film of Billy Graham’s life, some readers undoubtedly thought, the rest of us were in big trouble.

Wacker is Gilbert T. Rowe Professor of Christian History, emeritus, at Duke Divinity School. He is the author of “America’s Pastor: Billy Graham and the Shaping of a Nation” (Harvard 2014).