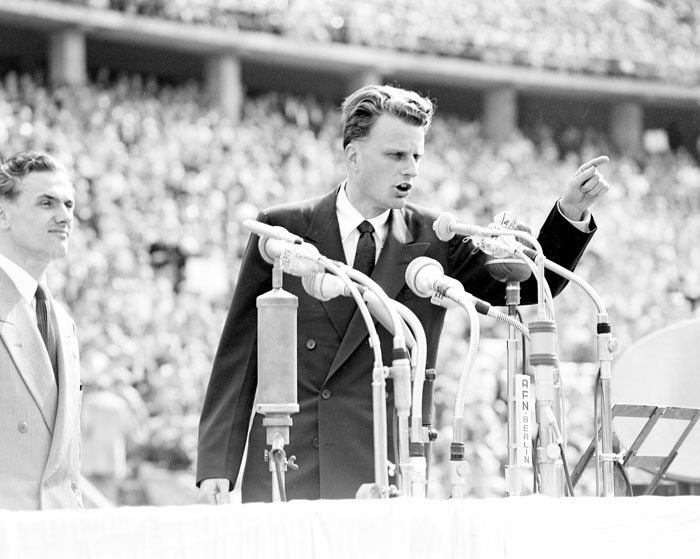 In this June 27, 1954 file photo, Evangelist Billy Graham speaks to over 100,000 Berliners at the Olympic Stadium in Berlin, Germany. Graham, who transformed American religious life through his preaching and activism, becoming a counselor to presidents and the most widely heard Christian evangelist in history, has died. Spokesman Mark DeMoss says Graham, who long suffered from cancer, pneumonia and other ailments, died at his home in North Carolina on Wednesday, Feb. 21, 2018. He was 99. (AP Photo, File)

SALISBURY — Dr. Jim Harris says he still remembers the day he gathered with other pastors at the University of Vancouver to hear Billy Graham speak.

The year was 1965, 11 years after Harris was licensed to preach. A group of church leaders were attending an information session on evangelism that followed a campaign held by Graham and his brother-in-law, Leighton Ford.

Harris said that when Graham entered the room, everyone fell silent, ready and waiting for “words of wisdom from this great man.”

“I’ve lost my button,” said Graham, according to Harris, referring to one missing from his sport coat.

The detail is mundane, but Harris said it was a clear indicator of just how down-to-earth the man was and would remain throughout his career.

“There are not many politicians, not many entertainers, not many preachers, not many people that could have the world recognition that he had and still maintain the humility that he did,” Harris said.

Graham, known as “America’s pastor,” reached an estimated 215 million people across 185 countries in the course of his career. He died Wednesday morning at his home in Montreat at 99 years old.

Harris, who began Friendship Baptist Church of Salisbury, said Graham was an inspiration to him and other ministers throughout Rowan County. It was easy to see that Graham was a “chosen vessel by God,” he said.

“He just had an understanding that it was not ‘Billy Graham,’ it was God in Billy Graham,” said Harris. “… He never forgot that, who was boss.”

Dr. Kenneth Lance, pastor of First Baptist Church of Salisbury, said he attributes much of his ministry to Graham’s influence. Graham’s televised crusades were always an “event” in his home, he said.

“He was one of those individuals in my life when I was a teenager that helped me to understand what Christian faith meant,” said Lance. “That really positioned me to hear God’s call.”

Lance said Graham’s passing represents the “end of an era.”

“Graham endeared himself to all kinds of people. Not just people of faith, but he held a degree of respect from those who did not share our faith,” he said. “… You just don’t see that. There are not many leaders or even pastors who command that kind of respect.”

Matthew Weaver, a local musician and member of First Baptist, said Graham was his “childhood hero.”

“He didn’t let politics into his message,” he said. “He did not let segregation divide his crusades. He wouldn’t hold a crusade in an area that wanted them to be segregated. That speaks a lot to his character.”

Former U.S. Sen. Elizabeth Dole said Graham’s unbiased evangelism was fueled by a simple mantra: “We are not cisterns made for hoarding; we are channels made for sharing.”

He lived those words every day, said Dole, thereby reaching millions of people in every corner of the world.

In Rowan County, the ripples of Graham’s worldwide reach have flowed outward and inward, uniting natives of the county and transplants alike.

The Rev. Jonas Perez’s parents converted to born-again Christianity at a Billy Graham Crusade held in Venezuela in 1961. Perez calls the evangelist his parents’ “spiritual dad.”

Their conversion would influence Perez’s leap into the ministry, he said. He now serves as director of missions for the Rowan Baptist Association and has started two Spanish-speaking churches in the area.

One church, Iglesia Bautista Fe en Jesus, is on Newsome Road in Salisbury.

“The messages of Billy Graham were powerful, persuasive, and yet profound. … I marveled at the … way people of all nationalities responded to that message,” said Dr. Rick Cockerham, a recently retired pastor. ” … He always said that his home was heaven, and he’s home. What a victory.”