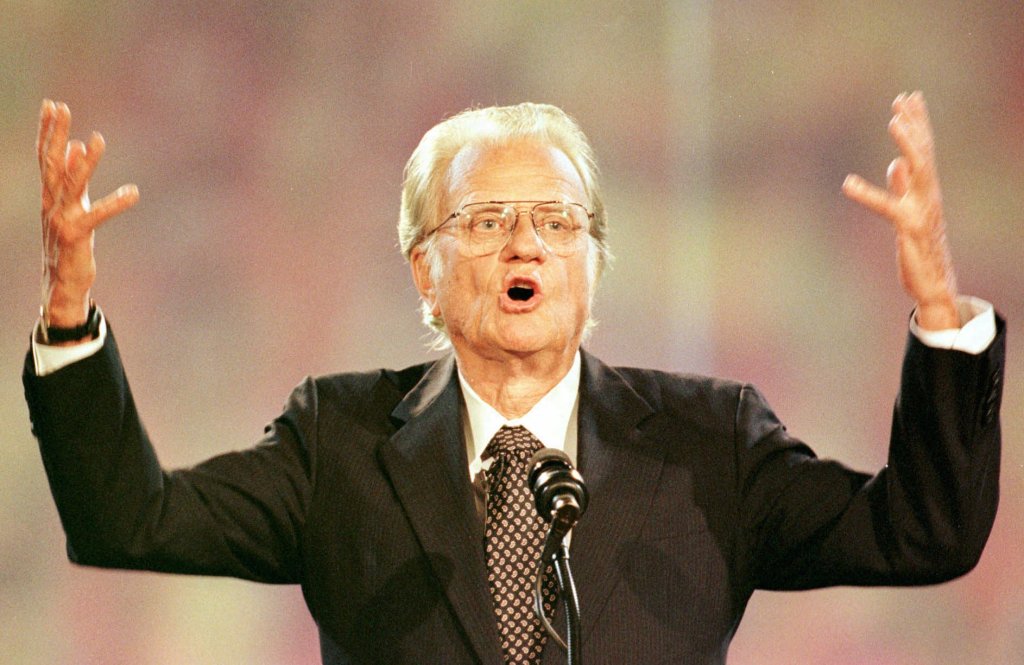 Rev. Billy Graham speaks to a crowd of more than 70,000 at Ericsson Stadium in Charlotte, on Sept. 26, 1996 on the first night of the Carolinas Billy Graham Crusade. (AP Photo/Peter A. Harris)

This editorial was first published in the Salisbury Post in 1996.

Billy Graham will draw hundreds of thousands of people to Ericsson Stadium this week for a crusade whose impact will ripple across the region for years. The Carolina Crusade-goers join some 210 million people who have heard Graham’s message in more than 185 countries, and the inevitable question is, “Why?” Why do so many people flock to hear this 78-year-old man?

Because they hunger for meaning in their lives. Because they yearn for a central message, a message that Graham communicates so well. Faith is not foolishness, Graham assures the multitudes. Faith is strength.

Though no man is perfect, Graham has proved more lasting and selfless than most. Televangelists like Jim Bakker and Jimmy Swaggart fell to scandal. Other religious leaders lace their ministries with partisan politics. But Graham has stood far apart from that. …

While Jim and Tammy Faye were buying golden faucets and preaching a gospel of monetary reward, the Graham family preferred a cottage in the North Carolina mountains.

While other ministers amassed political power through the Moral Majority and the Christian Coalition, Graham steered clear of politics to tap a higher power. Rather than dwell on things that divide Christians, he has tried to pull them together.

So it is that this Baptist preacher, once a purveyor of fire and brimstone, has come to stress a more merciful side of Christianity. “I think there is a greater emphasis on the love of God (in my ministry),” he told interviewers. “I believe that there is a hell, so people are going there if they reject Christ. But at the same time, the overwhelming message is the grace and the love and the mercy of God. And that’s what I emphasize now a lot more than I did in the earlier years.”

A message far more lasting than Panthermania will fill Ericsson Stadium Thursday through Saturday. Don’t expect to see only Baptists there. You’ll also find Lutherans and Methodists, Pentacostals and Presbyterians, Episcopalians and Catholics, and many who are otherwise unchurched.

You have to admire Billy Graham.