Carson girls pull away, defeat Mount Tabor in 3A playoffs 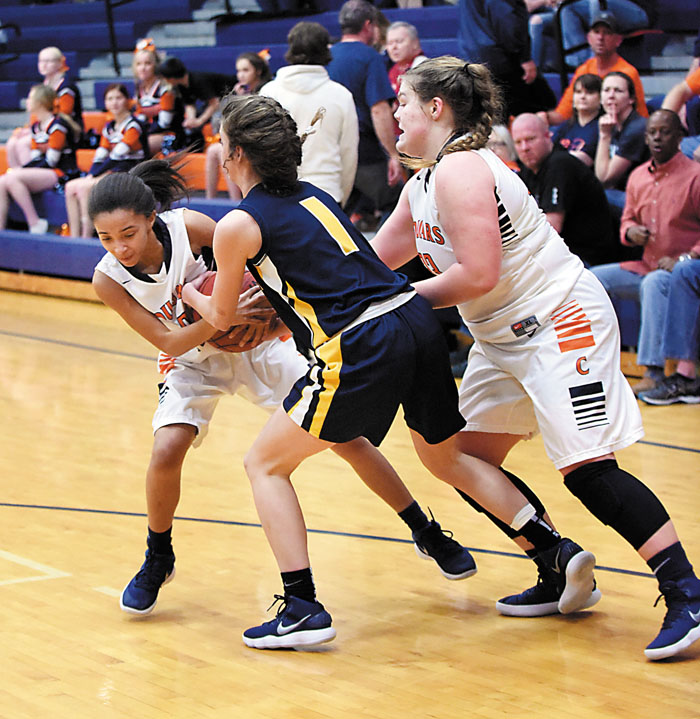 CHINA GROVE — It took some doing, but Carson’s girls basketball team has checked off the first item on its post-season to-do list.

The Cougars began slaloming through the tricky banks of the 3A state playoffs Tuesday night with a harder-than-it-looked, 65-46 victory against visiting Mount Tabor.

“We felt they were going to be a tough, first-round matchup,” coach Brooke Stouder said, just moments after the 10th-seeded Cougars (24-3) shook off a sluggish first half and earned a second-round bout at J.M. Robinson on Thursday. “They had been playing well lately. And they played good defense and got after it. We knew they’d play us hard, but they really out-hustled us in the first half.”

It seemed that way. Halfway through, Carson was clinging to a 23-18 lead in a game punctuated by hurried shots and needless turnovers. Mt. Tabor, meanwhile, was playing smoke-them-out-of-their-caves defense and limited the Cougars to seven first-half baskets.

“We defended pretty well in the first half,” losing coach Rick Anderson said after the Spartans finished 15-13. “In the second half, we got bumped off our assignments and they made us pay for it. Our biggest problem was we couldn’t finish around the basket.”

Carson found itself in the third quarter. First it went on a 9-0 run, sparked by freshman Ellie Wilhelm’s 3-pointer and Ann Marie Turney’s offensive rebound/putback combination that put the hosts up 34-20. Mt. Tabor answered with a 10-2 spree and drew within 36-30 when senior guard Jynesis Johnson scored on bee-line dribble-drive with 1:05 remaining in the period.

“We just weren’t making good passes,” said Wilhelm. “We couldn’t find a way to score and put them away. It took until the fourth quarter, when they were overplaying us. We could just drive to the basket and get layups.”

“It was very frantic for a while,” Stouder added. “We just kind of played into that pace. They really set us up and made us uncomfortable. We didn’t do a good job responding to that.”

When they finally did, the Cougars were decisive. A controlled 12-0 scoring run that bridged the third and fourth quarter put Carson in command. Colbie Perry’s 3-pointer from the right side put Carson ahead by 13 after three periods and when leading-scorer Olivia Gabriel (15 points) hit the second of two free throws, Carson led 48-30 with 5:53 remaining.

“We changed defenses,” Anderson said. “We went to traps, tried some different things. We wanted to stop them from running, but they just played too well.”

They kept playing well until the final horn, stretching their lead to 64-42 when up-and-coming freshman Carleigh Perry hit a 12-foot set shot from the left side in the closing seconds.

“All we could focus on was this game,” said Stouder. “We can’t talk about how many rounds we want to go or what’s next. We’re happy to win this game. Now we’ve got to get ready for Thursday.”

NOTES: Carson has won eight straight games, 10 of its last 11 and is 6-0 in February. It will face seventh-seeded Robinson (16-10), the South Piedmont Conference Tournament champion. The Bulldogs have won three in a row, including Tuesday’s 49-41 nod over Enka in the opening round.