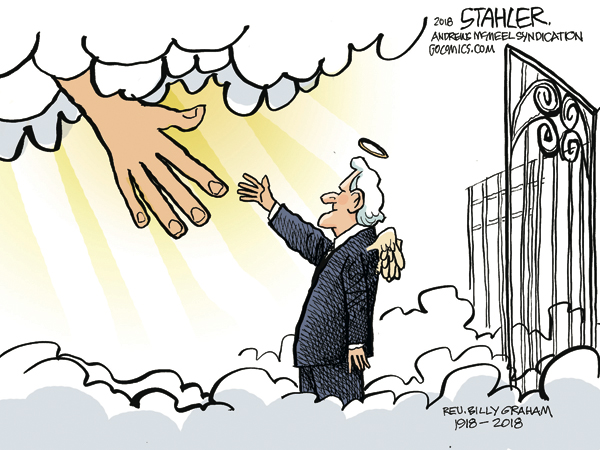 I have always known Billy Graham – the renowned global evangelist who died on Wednesday at the age of 99 – as “Daddy Bill.” Though I’m not sure how we grandchildren came up with it, we cherished the fact that we had our own special name for a man we shared with the rest of the world.

My earliest memories of Daddy Bill are of spending summers and holidays with him and my amazing grandmother Ruth Bell Graham in Montreat, North Carolina, traveling to his evangelistic meetings around the country, and hosting them at our home in South Florida. There, my grandfather would take us to his favorite restaurant, Morrison’s Cafeteria.

When my wife and I were attending different graduate schools in different states, we often met for weekends at my grandparents’ home, nestled in the Blue Ridge Mountains. I’ll never forget those weekends. Each night before my grandparents headed off to bed, they would come into the kitchen and ask if my wife and I wanted to join them in prayer. Many a night, the four of us ended the day on our knees together.

I am forever humbled to have known and loved a man who was the real deal – who was same person whether he was in front of thousands or whether we were walking alone through the woods. In an era when many evangelical leaders were exposed for deep moral and financial failings, I am grateful that my experience was much different. I could have easily grown to become cynical about Jesus and those who claim to follow him, but I knew and loved a man who made Jesus that much more beautiful to me.

Over the years, Daddy Bill and I had fascinating conversations about a wide variety of subjects. The ones I enjoyed most were about politics and history. What always amazed me was that he personally knew many of the subjects of our conversations.

One of my favorite memories is when he told me about meeting Winston Churchill. He recalled being in London and receiving a call from Churchill’s assistant, asking if he was able to stop by the following day. Daddy Bill turned down the invitation because he was scheduled to travel to Scotland the next morning. Yes, my grandfather turned down the opportunity to meet one of the greatest heroes of the 20th century. What is more amazing is that the assistant called back and asked if Daddy Bill was available to meet with Churchill that evening. A few minutes later, my grandfather was in a cab heading to 10 Downing Street.

I will always cherish the fact that Daddy Bill’s love for Jesus was genuine. In 1988, I witnessed this love when nobody else was watching. That year, Daddy Bill had invited me and a friend to accompany him to the Republican National Convention in New Orleans. One evening as we arrived at his hotel, I recall thinking that we were probably wasting our time; it was highly unlikely that Billy Graham would be sitting in his hotel room on a Friday evening during a major political convention. So I was surprised when Daddy Bill opened his door wearing his pajamas and invited us in. As we walked in, I noticed out of the corner of my eye his Bible lying open on his bed. Here was Billy Graham, given the chance to spend the evening with any number of influential and famous people of his day, and instead he chose to spend it alone with Jesus in his hotel room. I left his room that evening forever moved.

I will cherish the fact that Daddy Bill didn’t allow differences to get in the way of his love for people. He understood that regardless of position, wealth, political affiliation, race, gender or any other defining characteristic, all are made in the image of God and are in need of his love. Though some Christians criticized Daddy Bill for being too ecumenical or compromising, I witnessed his love for people open doors for him to be the hands and feet of Jesus to many who had been ignored, marginalized or simply written off by the ones doing the criticizing.

Daddy Bill’s genuine love for others has been a significant influence in the work I do addressing abuse issues inside the church. He understood the fundamental truth that Jesus never walked by the wounded laying on the side of life’s roads. Daddy Bill’s life pointed me to the Jesus who not only notices these precious people, but stops everything in order to move towards them, serve them and dignify them. It is my hope and prayer that the work I do will in some small measure reflect this same humanizing love for others.

What I will perhaps cherish most about Daddy Bill is that he taught me the meaning of humility. Toward the end of his life, one of his favorite Bible verses was, “May I never boast except in the cross of our Lord Jesus Christ, through which the world has been crucified to me, and I to the world” (Gal. 6:14). The verse was typed out in large font and hanging in various places in his bedroom and bathroom. He recognized that his life and leadership was not about himself. In fact, he always felt uncomfortable when the focus of any conversation was himself or his accomplishments. More often than not, Daddy Bill shifted the subject away from himself and toward Jesus.

I’ve been in the room when Daddy Bill called and spoke to the president of the United States, and later got up to pull the chair out for the housekeeper, whom he regularly invited to join him and Ruth for dinner. Here was a man who was no less interested in the lives of taxi drivers, housekeepers and waitresses than presidents, prime ministers and members of royalty.

My grandfather spoke often of his faults and failures, and sometimes even shared with me the many things he regretted and wished he could have done over. I know one of his life regrets was that he wished he had been able to spend more time with his family when they were young. In many ways, I think he made up for that lost time as he got older and made special efforts to enjoy his family . . . including his 19 grandchildren. I am so glad he did. Daddy Bill’s honesty about his weaknesses is what made this hero of mine authentic. We live in a world where many Christian leaders portray the gospel as if it requires us to have it all together.

Daddy Bill knew he didn’t have it all together. He was simply a sinner who was tackled by God’s amazing love and spent a lifetime sharing that love in words and actions. I will be forever grateful that this world experienced God’s love through my dear Daddy Bill and am profoundly hopeful that we will carry this love forward. Daddy Bill would have wanted it no other way.

Tchividjian is a former child abuse chief prosecutor and is the founder and executive director of GRACE (Godly Response to Abuse in the Christian Environment). He is also a professor of law at Liberty University School of Law, and is a published author who speaks and writes extensively on issues related to abuse within the faith community. Tchividjian is the third-eldest grandchild of Billy Graham.