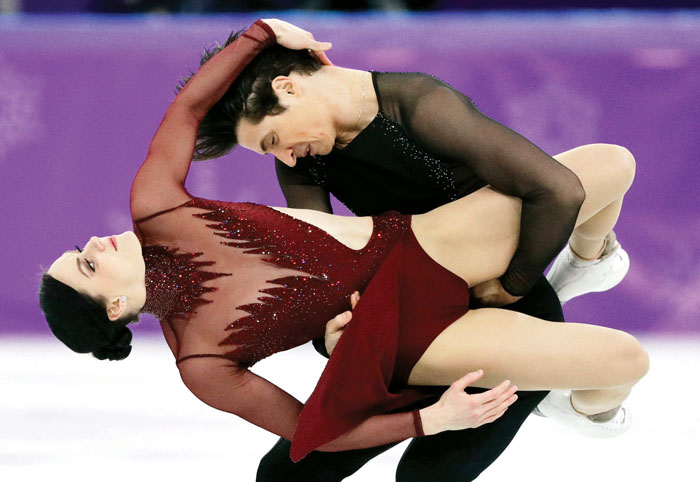 GANGNEUNG, South Korea (AP) — Canadian stars Tessa Virtue and Scott Moir won the gold medal in ice dancing at the Pyeongchang Games on Tuesday, becoming the most decorated figure skaters in Olympic history with a dazzling, dramatic free skate set to the music of “Moulin Rouge.”

Virtue and Moir scored a personal-best 122.40 points for a record 206.07 total, pushing them past training partners and close friends Gabriella Papadakis and Guillaume Cizeron in a riveting competition.

The French couple broke their own record for a free skate with 123.35 points to their performance of “Moonlight Sonata.” Their total of 205.28 points, also briefly a record, meant that Virtue and Moir needed to top their own best performance by 3.28 points when they took the ice right after them.

They accomplished it with room to spare.

It’s the second gold medal of the Pyeongchang Games for Virtue and Moir, who were instrumental in helping Canada win the team event. It was their third gold overall after winning their home Olympics in Vancouver in 2010, and their fifth overall after two silver medals at the Sochi Games.

The total broke a tie with Russia’s Evgeni Plushenko and Sweden’s Gillis Grafstrom for most medals in figure skating, and they tied the record for gold medals shared by Grafstrom, Sonja Henie of Norway and Irina Rodnina of the Soviet Union.

The Americans were assured of an ice dance medal when Maia and Alex Shibutani, who helped the U.S. win team bronze, laid down their best performance of the season. The so-called Shib Sibs’ sharply choreographed program to “Paradise” by Coldplay was perfect until a shaky rotational lift late in the program.

They trailed teammates Madison Hubbell and Zachary Donohue by two-hundredths of a point after the short dance, and their near-season-best free dance allowed them to make up the difference.

The third American team, Madison Chock and Evan Bates, also was within sight of the podium after the short dance. But their rare fall entering their combination spin was enough to damage an otherwise beautiful performance to “Imagine” that still drew applause from the crowd. Chock has an ankle injury that she aggravated Monday during warmups.