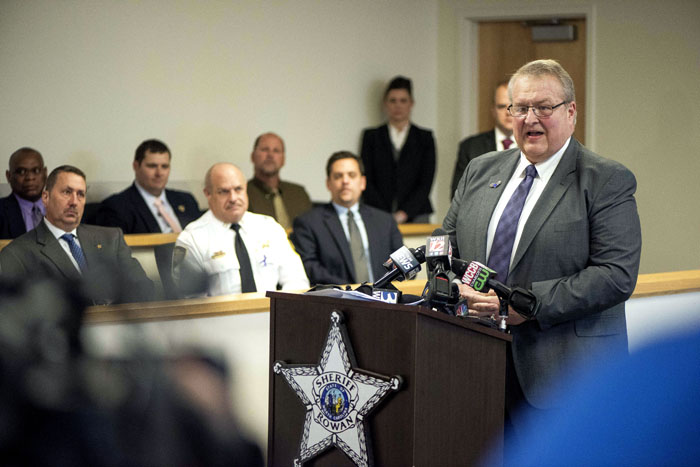 By Shavonne Walker and Rebecca Rider

SALISBURY — The spirit of missing teenager Erica Parsons has lingered long in Rowan County as local law enforcement agencies sought to bring resolution to her disappearance and then her apparent murder.

But Monday afternoon, the case lurched forward after almost a year of quiet when a Rowan County grand jury returned a true bill of indictment with four charges against both Sandy Parsons and Casey Parsons. The Parsonses were Erica’s adoptive parents, and authorities said the teenager suffered years of abuse while under their care.

The indictment also revealed a gruesome detail about Erica’s death: her body had been dismembered. The information is part of why the Parsonses were indicted for concealment of death.

According to the indictment, the Parsonses “did knowingly and willfully dismember and destroy human remains of Erica Lynn Parsons, by any means, including removing body parts and otherwise obliterating any portion thereof.”

For law enforcement authorities, the indictments are one step closer to justice.

“We’re very proud to be where we are today,” Auten said. “It’s a difficult case. At times, we had a lot of hope we’d find Erica, then we had hope we’d find her remains. And now we’re just ready to move on with the prosecution.”

Casey and Sandy Parsons will be extradited to Rowan County, where arrest warrants will be served and a first court appearance set.

“It’s probably going to be a couple weeks,” Auten said. “It’s not gonna be today or tomorrow, I can tell you that.”

Auten said his office had been waiting for the autopsy results, and then for District Attorney Brandy Cook to complete a different first-degree murder trial.

“It’s been a long time coming,” Auten said. “You know, we wanted to make sure the ‘i’s were dotted and the ‘t’s were crossed.”

Auten said he is pleased the charges came in time for Erica’s birthday. Were she still alive, she would turn 20 on Saturday.

“So it’s kind of fitting we’re at this point,” he said. “I just wish we could have had them arrested by her birthday.”

The couple, who are currently in federal prison after a March 2015 conviction for tax fraud, mail fraud and other offenses, will be brought to Rowan County to face the latest charges. In the 2015 federal case, a judge sentenced Casey Parsons to 10 years in prison after she pleaded guilty. Sandy Parsons was found guilty by a jury and received an eight-year sentence.

On July 30, 2013, Erica, who would have been 13, was reported missing by her adoptive brother, Jamie, who is the Parsonses’ biological son. He told the Rowan County Sheriff’s Office that he had not seen his sister since November 2011.

What began as a missing persons report launched an investigation that would go on to capture national attention and uncover allegations of severe abuse of Erica by the entire immediate Parsons family.

In February 2015, Jamie Parsons testified in federal court that the last night he saw Erica, she looked sick. He said she complained of breathing problems.

Jamie described horrible living conditions and abuse that Erica endured at the hands of his parents, his siblings and himself. According to his testimony, Erica was punched, her fingers broken, she was neglected and at one point was forced to eat dog food. A malnourished Erica was kept locked in a closet and would endure punishment if she urinated or defecated while inside it.

The couple said they were contacted by Irene Goodman, who “wanted to get to know Erica.” Casey Parsons told a Post reporter in August 2013 that they let Erica visit Goodman at her Asheville home until, eventually, the teen didn’t want to return.

The Parsonses maintained their story, later proven to be false, that Erica was alive and living with Nan.

Casey Parsons prepared all of the family’s tax returns, including for his eldest son, Sandy Jr., who she allowed to claim the youngest children — Sadie and Toby — as dependents even though they were not in his household. She received some of the tax-refund money from Sandy Jr.

Testimony during the federal hearing revealed Casey was trying to avoid the IRS garnishing any money she would have received if Erica was listed on her tax returns because she had defaulted on a student loan. More children listed on her return would have meant less money.

The Parsonses also had an eBay account on which they listed items for sale. The couple collected money, but the two never sent the items to the people who paid for them. Bank statements showed twice in August 2011 that Sandy Parsons took thousands of dollars from a SunTrust account the couple shared.

Casey Parsons also claimed to be a first-time homebuyer in order to seek money from the government. She claimed she had bought an $80,000 home when she had not.

In February 2016, Sandy Parsons sought out Rowan sheriff’s Detective Chad Moose and admitted to the veteran law enforcement officer that Erica was dead. He also told the detective the exact date Erica’s body was disposed of: Dec. 18, 2011. Law enforcement officials maintain that no plea deal was made.

Over the past several years, Rowan investigators, along with agents from the FBI and SBI, searched different locations where the couple had lived — including their 218 Miller Chapel Road home in Salisbury and Sandy Parsons’ father and stepmother’s home in China Grove.

But Sandy Parsons led detectives about 80 miles from Salisbury, to land off Taylor Chapel Road near his mother’s house in Chesterfield County, South Carolina. The property is not owned by Parsons’ mother, the search warrant said.

“And he led us to the grave, which turned out to be Erica’s grave,” Auten said.

Sandy Parsons pointed to a shaded forest floor, just over a short incline, and there authorities found skeletal remains in a shallow grave dug into the sandy soil.

“That day in South Carolina was tough on all of us,” Auten said Tuesday. “I saw some pretty tough cops take it pretty rough.”

At Tuesday’s news conference, Auten said he knew why Sandy Parsons broke his five years of silence but he said he is unable to share that information. But without Sandy, he said, “we probably would have never recovered the body.” File photo JON C. LAKEY / SALISBURY POST Brent Lyerly and Jeff Moore bring in Erica Parson’s casket and set up a portrait before the service. A funeral service was held Erica Parson at First Baptist Church in Salisbury. After an emotional service, a procession departed the for the interment at West Lawn Cemetery in China Grove. Saturday, February 25, 2017, in Salisbury, N.C.

Most of those gathered inside the church had never met Erica Parsons, who would’ve celebrated her 19th birthday the day before her funeral.

She was remembered for the future she never had. Speakers said her death was a sad reminder for the community to “pay attention” to the countless other children who may endure abuse.

Erica’s biological mother, Carolyn Parsons, was seated on one side while most of Erica’s extended adoptive family sat on the other.

Nearly a year after it released Erica’s remains, the Medical Examiner’s Office released the autopsy. Auten said the report was “one of the final pieces” of evidence he and other investigators had been waiting for.

Auten said he had been “frustrated” by the delay but understood that Erica’s was an unusual case.

“I understand this case is not your normal case. It’s not routine for them, when all you have are skeletal remains and years behind the body decomposing,” he said.

But without the autopsy, the case couldn’t move forward. On Jan. 9, investigators got the evidence they needed. The medical examiner determined that Erica died of homicidal violence of undetermined means.

The autopsy also revealed that Erica was malnourished and had low bone density for her age and a pronounced growth deficit.

She also had signs of spina bifida occulta, a mild form of a birth defect in which a child’s spine has not formed properly.

At least one tooth was missing, and others showed signs of being broken, the report said.

For investigators, the primary feeling Tuesday was one of relief.

Auten said he is glad the Parsonses have been in prison where they could “do no more harm to the community,” but he and other investigators kept pushing, hoping to find Erica.

“It weighed on everybody,” he said. “I’ve been here 30 years, and some of my investigators have been here a long time, and we felt like if we did not find her and get these folks charged eventually, then we were failures in our whole career. This case has weighed on us pretty heavy. We just did not want to leave a little girl out there — we wanted to bring her home.”

The indictments are the result of partnerships among the Rowan County Sheriff’s Office, the SBI, FBI and local District Attorney’s Office. Auten said he wanted to thank the community for its support throughout the investigation. Residents of Rowan County, he said, are just as eager to see the case come to an end and to see justice for Erica.

“The whole community is enraged, to some degree,” he said.

“There are people that think the Parsonses should have already been hung on the square. They’ll have their day in court, and we’ll let the jury decide their fate,” he said.

Auten said the court case will not be easy.

“But we feel like we’re in a good place,” he said.

Auten said trying the case locally could be difficult.

The Parsonses will be held in Rowan County custody once they’re extradited from their respective federal prisons in Florida and Michigan.

Auten also thanked the team who worked on the case, including Detective Moose. But he made it clear that the story of Erica Parsons is far from over.

“It’s going to take all of us to finish this case and get that final justice for Erica,” he said.