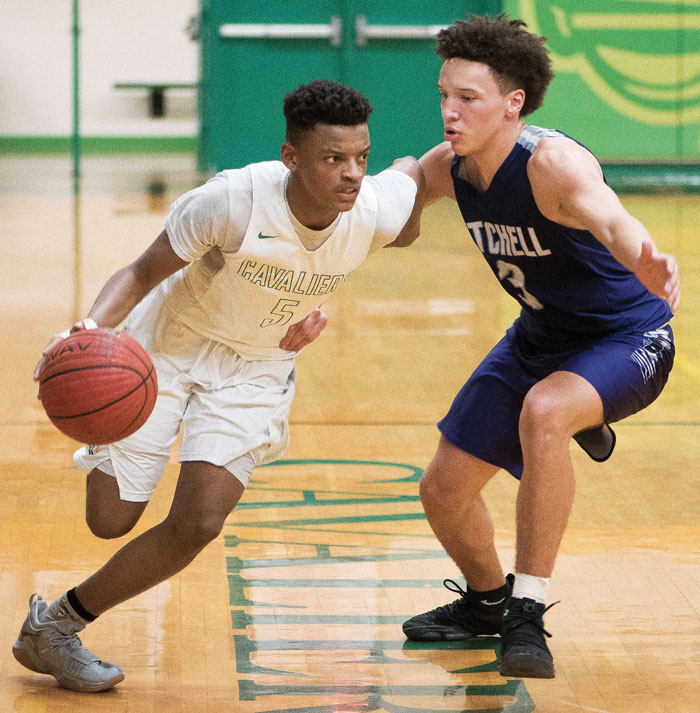 SPENCER  — A bumpy takeoff, but a safe landing for the North Rowan boys in the first round of the 1A state playoffs.

“There were more stretches in that game where I was unhappy then stretches where I was happy,” North coach Bill Kesler admitted. “But I guess we did enough to win.”

The bottom line is all that really matters now. It’s that survive-and-advance time of year, and the 11th-seeded Cavaliers did that in Tuesday’s 65-52 win against  Mitchell.

Mitchell (8-18) had to travel 130 miles from the mountains and had won only two road games all season, but it still wasn’t a breezy evening for the Cavaliers (18-8). North won mostly because it smashed 22nd-seeded Mitchell with defensive pressure in the second quarter. But the rest of the night was pretty even.

“Mitchell had strong guys, guys who have been in the weight room,” Kesler said. “And we didn’t get on the floor often enough. There are times when you’ve just got to get on the floor and get the possession. But we were standing up, bending over, rolling the ball around, trying to do something fantastic with it.”

Dayjuwon Cooke, a 6-foot-4 post player, led North with 20 points. He got half of those points at the foul line, with a solid 10-for-13 effort there.

“Practice, practice and more practice,” Cooke explained. “There was a time earlier in the year when I’d get fouled, and it was like, ‘Oh, no, now I’ve got to shoot free throws.’ But I’m a lot more confident now. You get knocked down, you play through it. You go to the foul line and you make the free throws. We’ve gotten better at that.”

Kesler offered the stats to prove it. North has converted free throws at a 72-percent clip during its current eight-game winning streak. Free-throw shortcomings were killing the Cavaliers in the first half of the season.

“And we played tonight without guard David Broaddus (virus),” Kesler said. “He’s been our best foul shooter. He’s made 19 of his last 20.”

Neither team made much of anything early, as Mitchell tried to find its legs, and North kept missing point-blank chances. North stumbled to a 13-12 edge after a quarter.

When the Cavaliers fell behind by a point three minutes into the second quarter, Kesler called a demonstrative timeout that finally got North going. The Cavaliers went on a 13-0 run before halftime for a 30-18 lead.

“We didn’t start out like we should have tonight,” Cooke said. “But then we started getting everyone involved in the offense.”

Clement was barely playing at all in December, but he’s emerged as a key guy recently. He had 16 in the YVC tournament championship win against North Stanly and he got 15 more against Mitchell.

“He’s got good size, he’s athletic, and right now, he’s our best 3-point shooter,” Kesler said. “He was struggling with his shot earlier, but he’s in a position now where he knows he’s not going to come out of the game because he misses one. He’s found a comfort zone.”

Clement stayed with it, even when it looked like his role as senior was mostly going to be cheer on his teammates.

“Coach Kesler told me to keep putting in the work, and my time would come,” Clement said. “Then I did get a second chance to play a lot and I’m making the most of it. They were backing off me tonight, with their hands down. When they’re offering you shots like that, you have to take them.”

Clement not only was taking — he was making.

Mitchell chopped North’s lead to nine in the third quarter, but junior forward Brevin Goodlett, who had another double-double, powered for two points, Quintous Smith Jr. followed his own miss for a bucket, and Clement pushed the lead back to a dozen points with a 3-pointer.

North’s lead swelled to 18 points in the third quarter, but Mitchell never really went away, scratching and clawing all the way to the final horn. Trystan Jenkins, a 6-foot-4 senior, scored 14 for the purple-clad Mountaineers.

“We didn’t have any idea what to expect from Mitchell, didn’t know how good they’d be,” Cooke said. “But when you get to the playoffs, you have to respect every opponent. Every team can beat you.”

North went 20-for-27 from the foul line. The Cavaliers will travel Thursday to Boonville to play the sixth-seeded Starmount Rams (22-3).