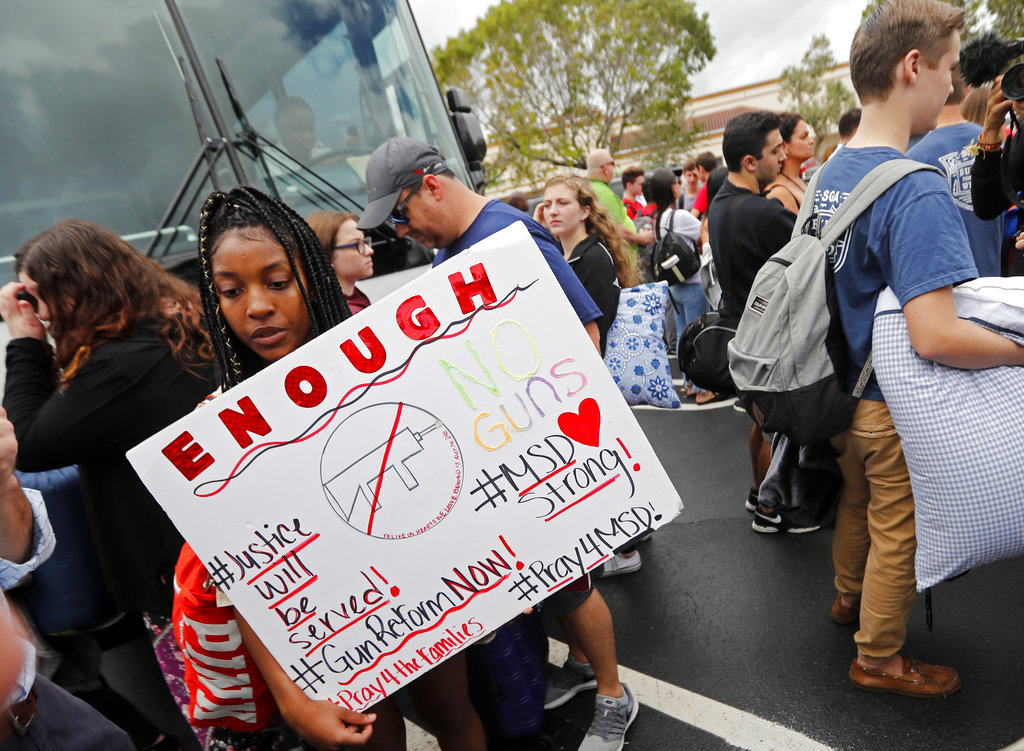 Tyra Hemans, 19, left, and Logan Locke, 17, right, students who survived the shooting at Stoneman Douglas High School, wait to board buses in Parkland, Fla., Tuesday. The students plan to hold a rally Wednesday in hopes that it will put pressure on the state's Republican-controlled Legislature to consider a sweeping package of gun-control laws. (AP Photo/Gerald Herbert)

To the Parkland students, I say, “Go, kids, go!” As a father, grandfather, veteran and gun owner, I know you are the voice of reason and hope for the future.

Clearly, politicians on both sides have been bought by NRA and gun lobby contributions. With the slaughtered innocents of Parkland, Newtown and too many other places fueling your justifiable outrage against the “do nothing” mentality, you have captured the nation’s conscience and heart.

The right to a gun should not facilitate mass murder. Automatic weapons are already banned. Semiautomatic assault weapons should be banned. No civilian needs semiautomatic military assault weapons to hunt, unless animals start shooting back. So why is the gun group so fixated on selling them? I believe it is simple profit.

Airliners were safe places until terrorists targeted them. Today, some aircrews are trained and carry guns. Perhaps we should train and equip appropriate school personnel so they can stop attackers. Trained “good guys” with guns limit attacks, as they did in the Texas church massacre.

Citizens have a “right to bear arms,” but we need rapid, thorough, universal background checks to keep guns from the wrong hands. It makes no sense for some jurisdictions not to require background checks for guns purchased at gun shows. Background checks identify domestic abusers, the mentally ill, and those put on a federal no-fly list.

Someone who is too dangerous to let on a plane, or mentally unstable, or a violent criminal should not be able to buy a gun.