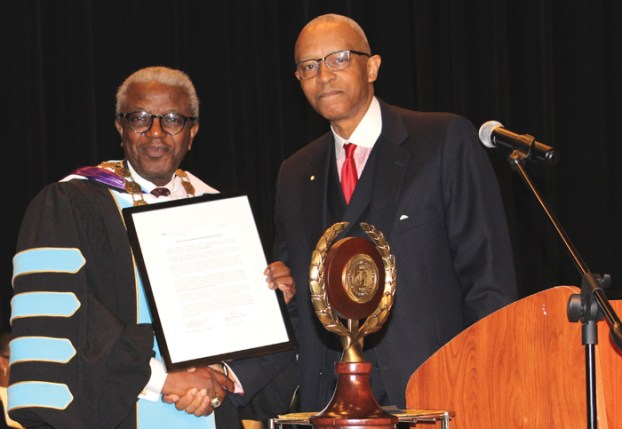 SALISBURY — The family of a former president of Livingstone College has established a $1 million endowed scholarship fund to help STEM students in need.

Sheldon Shipman, son of the late F. George Shipman, the sixth president of Livingstone College, announced at the college’s Founder’s Day on Feb. 8 that the Shipman family made the gift in memory of their father.

Shipman said the purpose of the scholarship is to give financial assistance to students with demonstrated financial need who have shown academic excellence at Livingstone with a minimum 3.0 grade point average.

“Recipients of this award must be of sound moral character that mirrors the life of Dr. F. George Shipman, his commitment to scholarship, humanity and service,” he said.

Preference will be given to students from the A.M.E. Zion Church and to students from the Raleigh-Durham area who are majoring in one of the STEM disciplines. Candidates who apply for the scholarship and meet the selection criteria will be interviewed by members of the Shipman family — or their designee — for final consideration.

An initial contribution of $250,000 will be transferred to the Livingstone College Endowment with the scholarship being fully funded within five years.

Shipman was president of Livingstone from 1969 to 1973. He was also a member of the Livingstone College Class of 1939.

“In 1969, I was a 15-year-old teenager who carried the mace — I was the mace bearer — when my father was inaugurated as the sixth president,” said Sheldon Shipman. “I’m 63 years old today, and I am the son of the sixth president, 49 years later, presenting you this endowed scholarship in his honor, and we are pleased to do so.”

In May 2016, Livingstone College broke ground on the F. George Shipman Science Annex Building. The annex, expected to be completed this year, will be about 16,000 square feet and include labs for biology and chemistry, research spaces and a state-of-the-art planetarium.

“The legacy of Dr. Shipman was sealed with the naming of our science annex building,” said Livingstone President Jimmy R. Jenkins Sr. “Now, it will be further perpetuated in the lives of these scholarship recipients as they earn their degrees and make positive impacts on society because of this generous offering. On behalf of the board of trustees and our students, we are grateful to the Shipman family for establishing this endowed scholarship fund.”