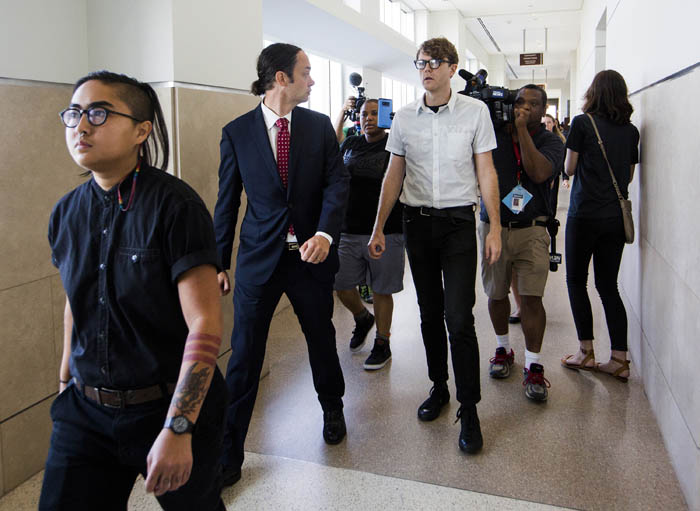 In a Thursday, Aug. 17, 2017 file photo, from left, Ngoc Loan Tran, 24, Peter Gull Gilbert, 36, and Dante Strobino, 35, leave a courtroom in the Durham County Courthouse after their first court appearance after being arrested for the toppling of the Durham County confederate statue during a protest, in Durham, NC. A North Carolina judge trying protesters accused of toppling a Confederate statue on Monday, Feb. 19, 2018, dismissed the criminal case against Strobino. (Casey Toth/The Herald-Sun via AP, File)

A judge dismissed the criminal cases against the first two defendants to appear in a series of individual trials, and he found a third not guilty.

Trials for five others are to be held at a later date.

Prosecutors showed videos of protesters bringing out a ladder, attaching a rope and yanking down the statue in front of a Durham County government building in August. But defense attorneys successfully argued through a series of objections that investigators had failed to meet stringent standards to prove the first two defendants were the people seen on the video.

In dropping charges against defendant Peter Gilbert, Durham County District Court Judge Fred Battaglia noted “the court must dismiss this case now … because the identification has not been made.”

He cited a similar reason for dropping the case against the first defendant of the day, Dante Strobino.

While Battaglia declined to dismiss the third case over similar defense arguments, he nonetheless found Raul Jimenez not guilty on all charges.

The three had faced misdemeanor counts including defacing a public building or monument and conspiracy. The rest of the defendants face similar charges.

The toppling of the statue helped thrust North Carolina into a national debate on Confederate monuments in the aftermath of white supremacist protests in Charlottesville, Virginia, which left one counterdemonstrator dead last August.

The Virginia demonstrations were triggered by a dispute over another Confederate monument.

While statues elsewhere have been vandalized, the Durham case drew widespread attention because protesters succeeded in bringing it down.

North Carolina is among a handful of Southern states with the most Confederate monuments. It also has a law preventing local officials from removing the statues.

Some of the Durham protesters have cited the Virginia violence as the reason they gathered Aug. 14 for the demonstration that led to the statue’s toppling. They say removing Confederate monuments is part of a larger fight against racism — an idea echoed by defense attorney Scott Holmes on Monday.

Holmes told the judge that the nearly century-old statue benefits “those who would celebrate the traitorous, violent defense of human enslavement.”

However, some Southerners argue that the memorials honor fallen ancestors and represent history, not racism. And, prosecutors argued, the defendants broke the law by destroying county property.

“This was not a spontaneous event but a well-orchestrated plan of organized destruction,” said prosecutor Ameshia Cooper.

The protesters initially faced felony rioting charges, but the district attorney announced earlier this year that he was dropping those counts.

The crumpled statue was taken to a warehouse shortly after the demonstration, and its pedestal has remained empty. Local leaders are convening a panel to study what to do with it and other Confederate memorials in the area.