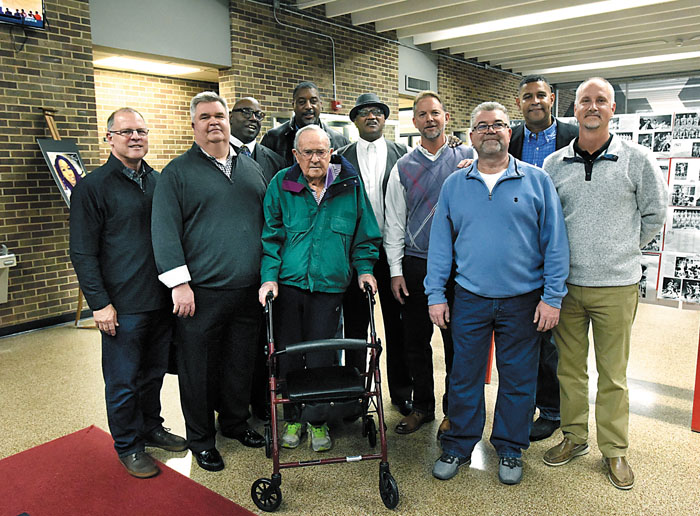 SALISBURY — Goodman Gymnasium and Sam Moir Court felt the footsteps of legends on Saturday afternoon as members of Catawba’s greatest basketball team, the 1982-83 squad, returned for a 35th reunion.

Sam Moir, the head coach of that team, was no kid in 1983 —the ex-minor league third baseman and World War II veteran was pushing 60 then —but 35 years later, he’s still a vital part of Catawba athletics, a living connection to long-ago glory days. From his sideline chair, Moir soaked up smiles and hugs from former players on Saturday. He heard the roar of the crowd one more time.

Time has mellowed Moir, but there’s still some salt and vinegar present. His wit remains intact. His brain may be 90-something, but he was blessed with a good one. It’s still a razor.

Ask Moir about his 1982-83 team, ask him if they were good, ask him if they could compete in today’s high-flying, helter-skelter world of college basketball, and he fights back the urge to laugh out loud.

“That team wasn’t just good,” he said. “They were dominant.”

Only five Catawba players have been drafted by the NBA. One was Dwight Durante, the phenomenal guard who helped break the color barrier at Catawba and played for Moir in the second half of the 1960s.

The other four — Mark Simpson, Maurice McDaniel, Bobby VanNoy and  Cleveland McRae —played in the frontcourt on Moir’s 1982-83 team.

VanNoy was 6-foot-9. The other three stood 6-8. McRae came off the bench to add to McDaniel’s inside power. VanNoy and Simpson were legitimate wing players, great athletes.

Everyone, Moir included, agrees Simpson was the most gifted guy on a special team. He was the Carolinas Conference Player of the Year. He had an incredible career in European basketball after leaving Catawba.

“Mark Simpson was the man,” confirmed Ed Fowler, the Virginian who started at shooting guard.

Simpson was from Indiana and was all but signed, sealed and delivered for Purdue University, but somehow Moir wiggled his foot in the recruiting door and kept it cracked open.

“(Assistant coach) Tom Bonebrake and I recruited Indiana because there always were a lot of players there, “Moir said. “Every year, I’d get in the car and go to Indiana to find some more, and we had five Indiana boys on that 1982-83 team. My wife, Betty, is the reason we were able to recruit Simpson. Betty promised his mother that she’d look after him if he came to Catawba. No one was going to be looking after him like that at Purdue, and so we got a great player.”

Simpson’s inside/outside game was similar to that of Mark Alarie, a terrific Duke player from that era, except Simpson was terrorizing the NAIA ranks.

“We’d put Simpson outside at the 3-point line and if you didn’t want to come out and guard him, he’d make the shot,” Moir said. “And if you did come get him, he’d take two dribbles and he was dunking it. We had a lot of very talented players, but he was the key to that whole thing.”

The Carolinas Conference was experimenting that season with a 3-point shot and a 30-second clock. Both innovations were made to order for the offensive-minded Moir. Catawba would score 92 points a game, a school record that still stands. Catawba played at a fierce pace, shooting frequently and accurately and getting to the foul line a lot. Catawba would set long-standing school records for most wins (29) and fewest losses (4).

Catawba shot an amazing 78 percent from the floor early that season to beat Atlantic Christian, 118-105. A week later, the Indians put up 96 shot attempts and beat Alderson-Broaddus, 131-119. Both those games live on in the Catawba record book. Art Rose, a point guard from Indiana, set yet another school record that season, accounting for 8.7 assists per game.

“We had everything,” Moir said. “We had size and we had speed and we had shooters. We had two great point guards. And we were just so deep. Our second team was as good as most people’s first team.”

It showed. Catawba ran the table in conference play for the first time since 1945, going 14-0.

“We were a special team for a lot of reasons,” said sharpshooting reserve Andrew Matthews, who went on to coach the Salisbury High boys teams for five seasons. “We were well-conditioned by our coaches in practice and always well-prepared for every situation. We had winning players and we had smart players. We could follow directions and we could learn plays quickly. The ball didn’t always go in, but we could run a set play perfectly, time after time. Most of all, we had chemistry. The starters pulled for the backups, the backups pulled for the starters. I love to coach and I’ve coached a long time now (currently he’s in Lancaster, Pa.), but I appreciate what we had on that Catawba team even more as the years go by. Not every team has that type of chemistry.”

Matthews had played high school ball in Roberta, Ga., a small, two-traffic-light town south of Atlanta. He’d played on a pair of state-championship teams led by Kenny “Sky” Walker, the McDonald’s All-American who went on to star for Kentucky, so he’d learn how to accept a role and he’d learned how to win. Matthews jumped off the bench and shot 41 percent from 3-point range for the Indians in 1982-83.

“We could sub anywhere and not drop off any,” Fowler said. “That was such a big advantage.”

Catawba was ranked 13th in the final NAIA poll that season and headed into the Carolinas Conference Tournament at Elon as a heavy favorite. One voter had the Indians No. 1 in the country.

McDaniel scored 22 and Simpson 20 in a semifinal win against Wingate. That was Catawba’s 26th victory, tying the existing school record.

UNC Pembroke had been a hex team for the Indians, but Catawba posted a satisfying 82-75 win over the Braves to take the tournament and break the school mark for victories. VanNoy scored 20,  McDaniel had 19 and Fowler 17.

The four-team District 26 tournament was next, with the winner moving on to nationals. Now the Indians had to make adjustments from the style of play they’d used all season. The district tournament would be played with no shot clock and no 3-point line.

In the semifinals, the Indians would be up against a coach that Moir respected as much as any. Tom Childress, who had played high school ball for Moir in Mt. Airy and then had come to Catawba to play for him in the early 1960s, was coaching his final game at the helm of  the Pfeiffer Falcons.

Pfeiffer slowed things down in that district semifinal, not stalling, but playing at a deliberate pace, and stayed close. Catawba finally prevailed, 66-57, with Simpson scoring 20. Catawba had beaten Pfeiffer for the fourth time.

Catawba then faced UNC Asheville at Goodman Gym, with the teams playing for the right to move on to the national tournament in Kansas City,Mo.

“Of all the games we played, that’s the one I remember best,” Fowler said. “The atmosphere was amazing. It was wall-to-wall people in here. There was so much at stake.”

But there also was bad news. Simpson suffered a thigh injury. He still was expected to play in Kansas City, but how well he could play remained to be seen. The previous season, Catawba also had reached Kansas City, but the Indians had played without Simpson (scratched eyeball), and they’d lost in the first round.

Catawba was seeded eighth in the 1983 NAIA national tournament at Kemper Arena and was expected to handle Liberty Baptist, the Virginia school now known simply as Liberty University, in the first round.

Again, there were no shot clock and no 3-point line, important elements of Catawba’s stellar season.

VanNoy led Catawba to an 18-9 lead against Liberty, but then Simpson, already hobbled, went down with an ankle injury. McDaniel also was playing at less than 100 percent (he’d had a painful boil removed), and then he got in foul trouble. Momentum shifted. By halftime, Catawba was hanging on with a four-point lead.

The pace picked up in the second half, but Liberty’s Eric Gordon and Steve Isaacs couldn’t miss. They combined for 52 points, and Catawba lost, 77-67. VanNoy scored 19 and Fowler 16, but Catawba got only 13 combined from Simpson and McDaniel.

“It was the worst game we’ve played in five years,” Moir told a herd of reporters after that stunning loss. “We didn’t shoot it, didn’t pass it, didn’t rebound it.”

Still that season is remembered not for that ugly last game, but for the joy and the high level of play that preceded it. The players who took part in that exciting run as 20-year-olds remain brothers even as their lives roll through their 50s.

“Honestly, the only thing I remember about that Liberty game is that we lost,” Fowler said. “But the experience of going to Kansas City, I remember a lot about. That was so much larger than just that game itself.”

Catawba remains an integral part of Fowler’s life. He met his wife at Catawba during his playing days. Their son, Bryce Fowler, was a standout baseball player for the Indians in recent years.

A lot of old  Indians were reunited at Goodman Gym Saturday. Some returned for the first time in decades. Some hadn’t changed much. Some had changed a great deal.

“We picked up a lot of the old stories today from 35 years ago,” Fowler said with a smile. “They were still as funny as ever.”