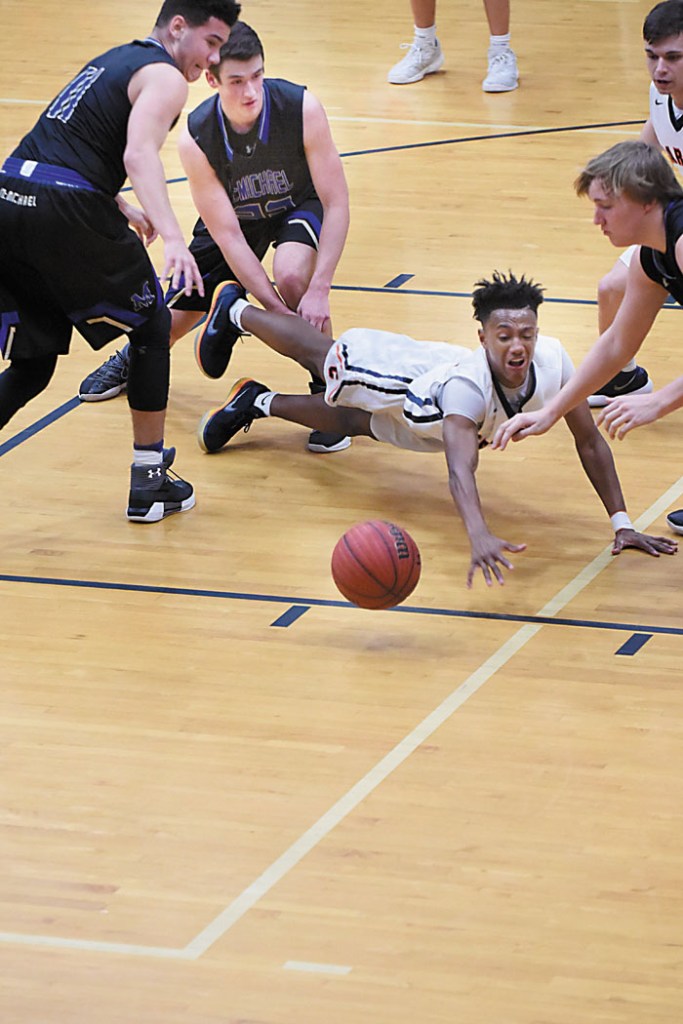 CHINA GROVE — If the McMichael boys basketball team was looking for trouble, it came to the right place.

Host Carson put the Phoenix in a vice and squeezed hard Tuesday night, when it opened the 3A state playoffs with a 91-66 victory.

“We had to come out with some intensity,” senior Jailen Williams said, after Carson (24-2) advanced to Thursday’s second-round game with Hunter Huss. “We couldn’t take them lightly. This time of year, anybody can beat anybody.”

The fourth-seeded Cougars avoided that list by building a 13-3 lead in the first three minutes, draining nine 3-pointers and placing four scorers in double figures.

“That’s the formula,” coach Brian Perry said. “That’s what seems to work for us.”

Williams led the way with 21 points, including 10 in the third quarter when Carson busted the game open. His well-placed floater down the lane helped turn a 16-point halftime lead into a 58-36 advantage, midway through the period. And his straight-line drive for a layup bolstered the edge to 67-42 with 1:33 remaining in the quarter.

“We dug ourselves a really deep hole in the first half and couldn’t climb out,” said McMichael coach Randel Galloway. “It’s hard when the other team has four or five guys who can stroke it. We knew they could all shoot. That was the scouting report we got. They proved it tonight.”

Carson — winner of nine straight games and 11 of its last 12 — successfully executed a pair of ally-oop plays in the third quarter. The first came just eight seconds into the second half, when Jamarius Hairston flushed down a perfect lob from Owen White.

“We were shooting around, warming up before the second half started,” Hairston explained after contributing 20 points. “Perry just came over and asked if I thought we should run it. It was perfect timing. Their coach probably had them all hyped up at halftime, ready to make a run to start the second half. We pulled it off and it was probably more like a punch in the mouth.”

They didn’t serve any cookies with that punch. Instead, the Cougars did it again with 2:41 remaining in the quarter. This time White (17 points) elevated and turned a feed from teammate Cole Perry into a sledgehammer dunk and a 24-point lead.

“A lot of times, those plays give us energy,” said Coach Perry. “That’s what we were hoping for.”

Carson led by as much as 76-46 early in the fourth quarter when Cam Prugh buried a 3-ball from the left corner. A minute later, Cole Perry (19 points) hit a left-side set-shot from the beyond the arc. Only 1:37 remained when little-used reserve Deacon Wike knocked down Carson’s final 3-pointer, a floating rainbow that provided a 90-63 lead.

“We were trying to keep up with them,” Galloway said after 29th-seeded McMichael (10-16) closed up shop with its sixth loss in its last seven games. “And that was out of character for us. We usually try to take what the defense gives us, but they didn’t give much.”

Prugh, the level-headed senior who steadies Carson’s ship, finished with nine points. “The key was coming out and playing playoff basketball,” he said. “Everybody’s playing for their lives right now. The records don’t matter. We just had to play smart and we’d get to the next round.”

NOTES: Carson, now 11-0 at home, will host 13th-seeded Huss (18-8) at 7 p.m. tomorrow. The Huskies have claimed seven of their last eight decisions and are 6-5 on the road. They advanced with a 58-52 first-round win over Southern Guilford.