Audience at library heard the sounds of freedom 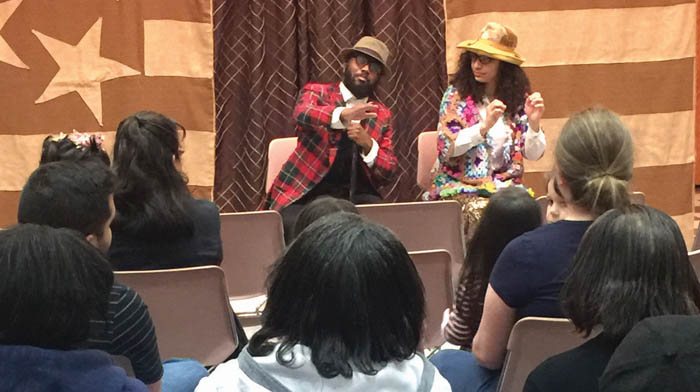 Families gathered to see the lives of African-Americans come to life through theatrical performances.

The 45-minute program was a series of skits connected by a frame narrative: A married couple’s interactions offer light, comedic moments as the couple recount their experiences and black history legends.

The program also featured songs such as “Wade in the Water,” often sung by slaves to steer runaways to walk alongside river banks, and “Swing Low, Sweet Chariot,” which was often sung by Harriet Tubman, a leading abolitionist who led hundreds to freedom along the Underground Railroad.

Delivering powerful, accessible productions that give audiences a better understanding of history is a central goal for Bright Star. The songs, poems and speeches composed by African-Americans during slavery, the Civil War, Reconstruction and the civil rights movement and performed in “Let Freedom Ring” accomplished this goal, according to audience members.

“This opportunity was very informative, moving, inspirational, beautiful and excellent. It was a last-minute decision for me to come and be with my people this evening,” said Darlene Scott.

“Let Freedom Ring” demonstrates how everyday people can make a difference by standing up for what is right. Audience members recognized the importance of that message.

“I came to learn more about black history, and this was a fantastic experience,” said one viewer. “I am glad our library provides programs like this for the community. It is important that my 4-year-old daughter is exposed to black history and how our lives have been shaped through past lives and experiences.”