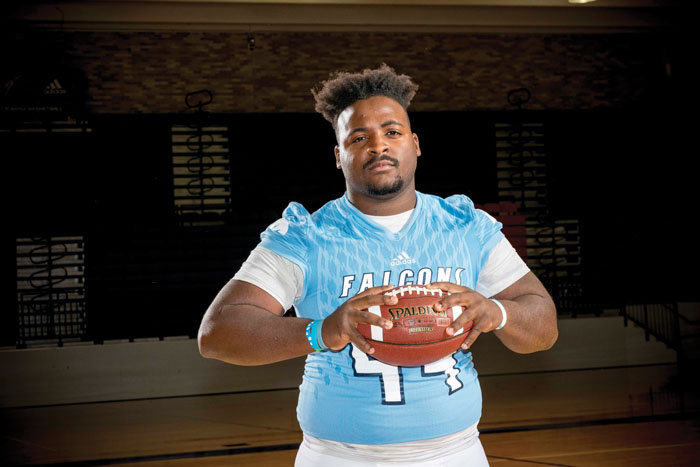 “He’s one of the best players I ever coached,” West head football coach Joe Nixon said. “Tough, physical, hard-nosed — he’s how you want all your guys to be.”

So why St. Andrews? Located in Laurinburg, St. Andrews hasn’t been the football capital of the world. SAU started recruiting for a brand new program in 2016, started playing games in 2017, and promptly trudged to a 2-8 record.

The Knights compete at the NAIA level against schools only diehard fans have heard of. They compete in a far-flung league (Mid-South Conference) that most don’t know exists. There’s close to zero tradition, unless you count last year’s win over Cincinnati Christian University, the first in school history.

But St. Andrews obviously did everything right recruiting Turner. The Knights hit a home run.

“They won my heart,” Turner said cheerfully. “They’ve signed a lot of great recruits. I can’t wait to see what we can do for that program.”

St. Andrews had a large advantage recruiting Turner. Namely his tour guide, Kacey Otto, a former West Rowan quarterback and now one of the St. Andrews QBs. When Otto endorsed the program and coaches, said he was enjoying school as well as football, that’s exactly what Turner wanted to hear.

Turner also was pursued by Bluefield College and Kentucky’s Union College. In recent days there was increased interest from Division II schools, UNC Pembroke and Winston-Salem State, probably after they didn’t get guys they’d hoped to ink on National Signing Day.

Turner wasn’t frustrated or disappointed by the recruiting ruckus.

“Actually, I enjoyed the process,” Turner said. “I took my time, took some visits. Some more schools started to come in late, but, by then, I was set on St. Andrews.”

There’s more to Turner than tackles for loss. There’s a serious desire to earn a degree. Beyond that, there’s a burning drive to be a difference-maker. He doesn’t just want to play football at St. Andrews, he wants to be a four-year starter and he wants to impact the program as much as he’s impacted West. He wants his teammates to be inspired by him and he wants younger players to look up to him. He wants to matter. He wants to be remembered.

He might accomplish all of that. It’s safe to say St. Andrews doesn’t get a lot of Devin Turners. If the Knights had 22 Turners, they wouldn’t have been 2-8.

Turner had 81 tackles (57 solos), 29 tackles for loss, 5.5 sacks, 20 QB hurries, two blocked field goals, four passes batted down, two forced fumbles and a fumble recovery for the Falcons as a senior. He was recognized as both the North Piedmont Conference and Rowan County Defensive Player of the Year. NPC Player of the Year said a lot because West finished third and first-place South Iredell had a Shrine Bowl defender.

“Just about every defensive play we made, Devin had something to do with it,” West defensive line coach Brett Graham said. “Either he was making the tackle or getting pressure on the quarterback himself or else they were double-teaming him, allowing someone else to make a play for us. He’s just really explosive, he gives relentless effort on every snap, and he’s the strongest guy in the school. It shows out there.”

Turner packs 285 pounds onto a 6-foot frame, but most of it is solid muscle. In a perfect world, he’d be 6-3, but he’s learned leverage and technique and has become a student of the game. He’s not just incredibly strong, he’s also crafty.

Turner played some varsity ball for West even when he was a freshman. He became a starter and an all-conference and all-county performer his sophomore year.

A shoulder injury temporarily interrupted Turner’s march to glory, but he turned that setback into his greatest triumph, using the rehab to get stronger, tougher and more determined than he’d ever been.

“That injury made me weak,” Turner said. “I can remember sitting there in the weight room my junior year, crying, because I knew I wasn’t the player I had been. But I came back from it. My coaches never stopped believing in me. They kept pushing, and I kept grinding. That grind has brought me to a college scholarship.”

Only about 2 percent of high school athletes get a true athletic scholarship, so it’s a major moment anytime someone signs.

“This is a big day for our county, our school, our community,” Nixon said. “When one of our guys gets a chance to get an education and to play football, that’s a great day.”

Nixon will miss Turner, who hopes to study athletic training and sports medicine at St. Andrews.  Turner didn’t just tackle people, he brought a love for the program to every Friday Night and every practice.

“I think everyone could see how good Devin was on the football field,” Nixon said. “But he was also such a good person off the field, just a fun guy to be around. He matured so much the last few years. He’s a guy that teachers want to have in their classroom.”