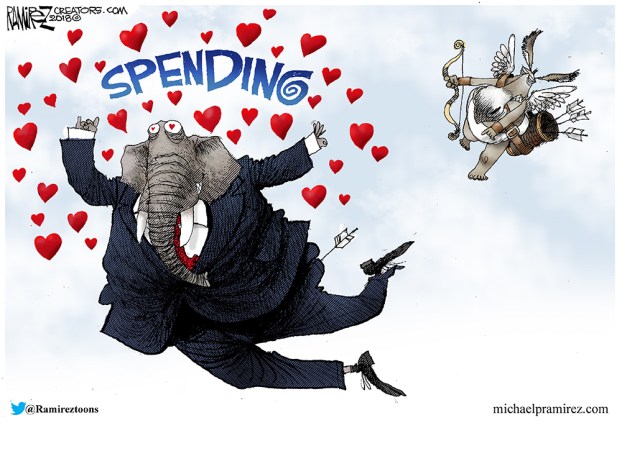 Other Voices: Dropping the pretense

With the budget deal signed last week, the White House and Congress have abandoned even the pretense of fiscal responsibility.

The bipartisan budget deal passed on Feb. 9 suspended the debt ceiling through March 1, 2019, increased spending by $300 billion and raised spending caps first put in place in 2011 at the peak of the tea party movement.

It also keeps the federal government on track to hit $1 trillion annual deficits.

For that kind of outcome to occur under the watch of a Republican-controlled White House, Senate and the House of Representatives should disabuse anyone of the notion that overspending is an exclusively Democratic problem and that Republicans can be depended upon for fiscal discipline.

It’s a complete reversal from the tough talk of Republicans during the Obama administration, something Sen. Rand Paul, R-Kentucky, pointed out in a Sunday appearance on CBS’s “Face the Nation.”

Elected in 2010 as part of the tea party tidal wave that gave Republicans control of the House, Paul recalled the widespread condemnations of $1 trillion deficits under President Obama. “I’m still against deficit spending; just because Republicans are doing it, doesn’t make it any better,” he said.

Unfortunately, President Trump’s new budget plan only takes the discussion even further in the wrong direction. The 2019 spending plan from the White House calls for $4.4 trillion in spending against $3.4 trillion in revenue, which thereby leaves the $1 trillion deficit. The White House plan also projects a near $1 trillion deficit in 2020 followed by a decade of continued deficit spending, ending in 2028 with deficit of $363 billion.

As beneficial as tax cuts signed in December might be, they will ultimately aggravate the gap between spending and revenues. For principled fiscal conservatives, the idea should be to reduce spending accordingly. That is easier said than done, of course, but members of Congress are ostensibly there to do the hard work of solving difficult problems.

For now, it seems, Republican leaders are split on how to effectively tackle the deficit.

House Speaker Paul Ryan has talked about the need for entitlement reform as part of any true attempt to balance the federal budget, but Senate Majority Leader Mitch McConnell said in December that entitlement reform wouldn’t be on the agenda this year, and President Trump has shown little interest in it.

Where they seem to agree, though, is on higher military spending. At some point, fiscal conservatives must be open to the possibility that throwing more money at the military might not be consistent with their vision for limited government or fiscal responsibility. As Sen. Paul encouraged fellow Republicans to think about, “Is the military budget too small or maybe is our mission too large around the world?”

While they’re trying to have it both ways, Republicans must choose between commitments to fiscal responsibility or whatever compels them to drive up $1 trillion deficits once in power.