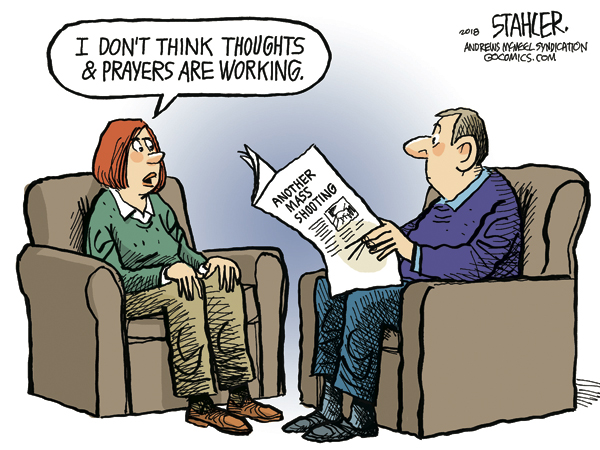 Once again, the ugly assault on innocent Americans has continued —  this time on high school students. And once again, the man in the Oval Office and the majority of both houses of Congress refuse to act.

We know why this is. President Trump, Sen. Richard Burr and Sen. Thom Tillis are supported by the NRA. Rep. Ted Budd is a gun shop owner, and Rep. Richard Hudson thinks you should carry a piece everywhere.

Two of the staunchest conservative Republicans ever, President Ronald Reagan and Supreme Court Justice Antonin Scalia, stated automatic weapons should be banned. This is not an infringement on your Second Amendment rights.

Automatic and semi-automatic weapons are for wars, not for sick individuals to go out and kill as a repayment for what society did to them. Yes, it may be caused by illness, but that still doesn’t make it right for anyone to possess these weapons.

I hereby call on our North Carolina members of Congress to immediately start legislation to ban all assault-style weapons and equipment that make guns automatic weapons such as the “bump stock.” Prayers and condolences are no longer enough. Too many people have suffered because of these weapons. Parents have lost children, children have lost parents, partners, friends — all lost.

It is said our members of Congress fear what the NRA will do to their reelection bid. Well, listen up; you better fear the vote of the people more than the NRA.

Americans are fed up with this “non-action.” We will unite in this one cause. You must not allow the continuing killing of our loved ones. The time is now.

Letter: NRA and our senators