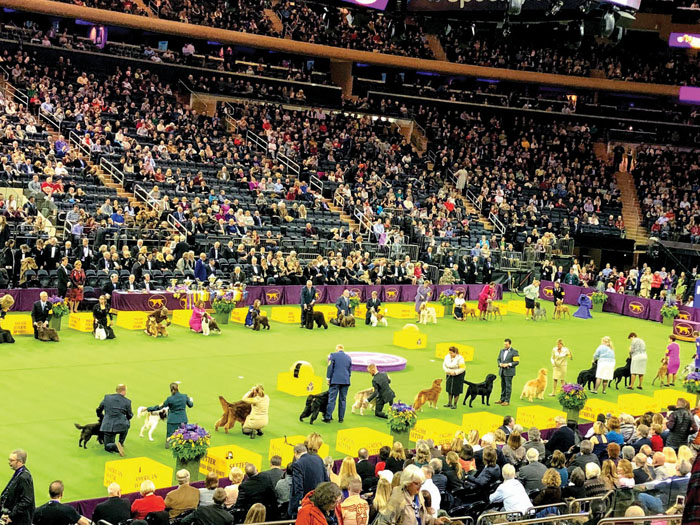 This was not just another dog show. This was the Academy Awards of the canine world when the dogs pranced in the arena at the Westminster Dog Show in New York’s Madison Square Garden last week.

My wife, Gerrie, and I had the good fortune to see and pet some of the most beautiful canines in the world. We also had the opportunity to go backstage to see the canine divas prepare for our nation’s second oldest sporting event.

Nearly 2,800 dogs from all over the United States and foreign countries participated in this year’s event. With the flair of famous Hollywood hair dressers, the handlers and groomers arrived at the crack of dawn, literally, for that final clip or brush before their diva entered the show ring.

Many of those in the ring at the Westminster Dog Show were professional handlers, showing as many as four to seven different breeds during the event. However, we did have the opportunity to visit a few owner/handlers that had bred, trained, exhibited and won their way into this prestigious league. Participating dogs had to be previous champions of 10 Best in Show wins to be accepted at the Westminster.

The breed judging and grooming took place in a separate location at Piers 92 & 94, close to Central Park. Winners of the Best of Breed then competed in the Westminster Show that took place that evening in Madison Square Garden.

Spectators are allowed to visit the dogs as they prepared to be judged earlier that day. It was a large gathering of organized confusion with a virtual sea of spectators, vendors and groomers trying desperately to make their canine look perfect before the curtain call.

Most groomers/handlers were generally easy going, confident that their animal would make a respectable showing. The dogs themselves were amazingly calm and seemed to enjoy the excessive attention.

Many groomers welcomed that excessive attention for their canine. It was another day at the office for dogs. Except for an occasional yelp, it was relatively quiet backstage. Some groomers had erected elaborate setups featuring cocktail bars to help celebrate a win.

Six rings of breeds were judged simultaneously during the day to choose the best of that breed. Best of Breeds were then placed into Best of Group which was judged during the evening events. Some of the lesser known breeds such as the Plott hounds had only eight entries while golden retrievers boasted over 40 entries. Judges took their mission seriously, carefully scrutinizing every critical detail of that breed’s standard.

The Westminster Dog Show is a benched show, meaning the dogs must arrive by a certain time and stay there all day, available for public scrutiny. After judging, the dog returns to its allocated space on the bench backstage. It is a long day for handlers. One started at 3 a.m. that morning and by the end of the day, it wasn’t surprising to see both handlers and dogs totally exhausted.

By the end of the show, 2,802 dogs had been paired down to just seven dogs, one representing each dog group.

Flynn, a Bichon Frise, was selected as the top dog Tuesday night at the Westminster. It was his 42nd career best in show placing. He had beat out six other top dogs.

It’s like a national dog show judge told me one time, “When you arrive at this level of competition, you can close your eyes and point to the winner in this show. They’re all that good.”

A man and his machine: Inventor Penley made powder…