A man and his machine: Inventor Penley made powder packaging easier 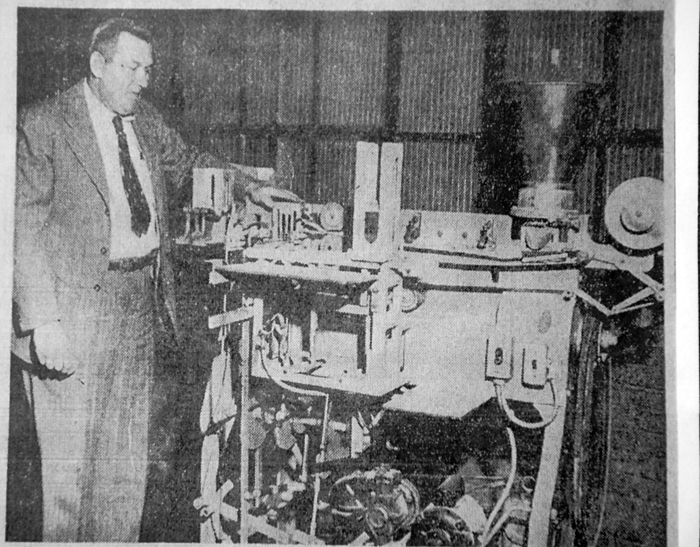 Salisbury Post file photo In 1954, Ralph Penley Sr. stands with one of the headache powder packaging machines he invented and for years would lease to companies such as Stanback and Goody's.

“It’s a mechanical marvel, what he did,” grandson Bill Penley says today.

Back in the early 1950s, Ralph Penley, then plant superintendent for the Stanback Medicine Co., invented a machine to improve the packaging of headache powder.

The Penley family story goes — and none of this can be verified or disputed today by the two main parties involved — that Dr. Tom Stanback wanted to claim Penley’s invention as belonging to the company, and his attorneys fashioned a letter to Penley telling him so.

Meanwhile, Harry Thomason, a patent attorney and inventor himself, had advised Penley to secure a patent on his machine as protection. It proved to be good advice.

Penley left Stanback in July 1953 and in less than a year’s time he had placed 27 of his headache powder packaging machines between the Goody’s plant in Winston-Salem and the Stanback plant in Salisbury.

And he kept going. Penley leased, never sold, the machines he produced in his small machine shop off U.S. 601. In that way, Bill Penley says, his grandfather had a constant income from the companies he supplied for the 17-year life of the patent and it’s five-year extension.

Ralph Penley fine-tuned the packaging machines in 1959, and he also patented a contraption that folded Red Bird handkerchiefs.

Bill Stanback, the late owner and chairman of the Stanback Co., once said Penley was the most ingenous, mechanically minded person he had ever met.

In recent months, Bill Penley has been looking at old newspaper articles, scrapbooks and boxes and thinking about the incredible man his grandfather was.

“Going through this stuff brings back all these memories,” Penley says.

Ralph Harkin Penley Sr. died July 15, 1997, when he was 93. The success he had with the R.H. Penley & Sons machine shop next to his house led to the family’s purchase of several properties at the beach, a mountain house in Brevard and a cabin at Panther Point on High Rock Lake.

“He was real frugal with his money,” Bill says. “Ralph Ketner said once, ‘If I had the money Ralph Penley had … ‘”

Penley built himself a fishing boat, and he also enjoyed hunting in the mountains.

“He was an active individual,” says 94-year-old Jack Kepley, who would become longtime Scoutmaster for Troop 448. Kepley especially recalls the Penley cabin at High Rock Lake.

“The Scouts used to go there all the time,” he says. “We had a key to it. I remember we had a great time.”

One of his best Scout memories, Kepley says, was an Easter morning breakfast of fatback and gravy at Penley’s cabin. Kepley stored his kayak there in a spot under the house.

One day Penley told Kepley, “Let’s take you for a real ride.”

They jumped into Penley’s motor boat and towed Kepley’s kayak by rope to a distant spot on the lake. Penley left Kepley there.

“I had about four miles to canoe,” Kepley said. “They had finished supper by the time I got back.”

Ralph Penley was a mountain kid from a large family in Buncombe County. His father eventually moved the family to Rowan County, where he was superintendent at McCanless Mills.

Ralph would attend schools in Salisbury and later at Warren Wilson College in Swannanoa. He came back home to work in a small textile plant, where he learned the mechanics behind looms. He also went to night school to learn about design.

His reputation grew as a hotshot loom fixer and mechanical genius.

“Tom Stanback heard there was a guy who could fix anything,” Bill Penley says.

Stanback hired him as plant superintendent, and Penley and his growing family of four children lived in a house the company provided on Heilig Avenue. Penley installed, maintained and improved much of the early packaging machines which had been imported from Italy.

That source dried up with World War II.

Penley had worked for Stanback for 12 years before resigning in July 1953 and going out on his own with his patent.

Penley’s new machine took things an extra step by selecting empty packaging envelopes from a stack, opening them and stuffing them with dosage packets. He also built machines to dose the powder.

In manufacturing his machines, Penley owned all the patterns and molds. Bill Penley says his grandfather probably would have stayed with Stanback had Dr. Tom just offered him a one-time payment of something like $3,000 for inventing the new machine.

His grandfather took a big chance in leaving what had to be a good job at Stanback and setting up his own business, Bill says. On his own, Ralph approached Goody’s first.

“If Goody’s hadn’t bought his machine, he was dead in the water,” Bill says.

Ralph Penley was a workaholic. At the height of production of the powder packaging machines, he would rely on help from several guys who worked their regular shift at Stanback, then a second shift at Penley & Sons.

Ralph and Rosa Penley had four children — Ralph Jr., who people knew as “Buck”; Bernard, who was with the Salisbury Fire Department as Fred Shipton’s assistant chief; Curtis, who was Bill’s dad and a mechanic at Walker-Mendenhall Motor Co.; and daughter Elizabeth.

After graduating from the University of Tennessee, Bill Penley joined his cousin Dick Penley in starting Custom Screen Prints in a building Ralph Sr. bought for them. The business later merged with Action America, did well and eventually Bill and their other local partners sold the company.

For many years now, Bill Penley has worked with Larry Edwards and Tar Heel Communications.

Bill says his grandfather Ralph was “happy, go-lucky, the nicest guy.” Growing up, Bill spent so much time with Ralph and Rosa that he had his own bedroom.

“I lived with them,” he says. “I was their pet. I would hear all their stories.”