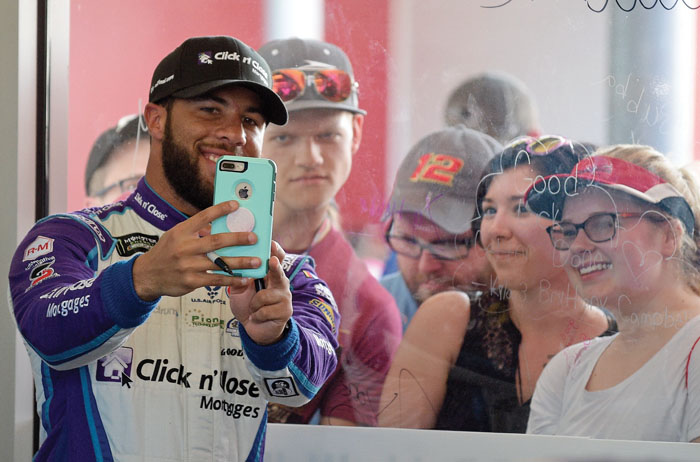 AP Photo/Phelan M. Ebenhack Darrell Wallace Jr., left, shoots a selfie with fans during practice for the NASCAR Daytona 500 at Daytona International Speedway on Saturday. Wallace is the first black driver to start the Daytona 500 since 1969.

DAYTONA BEACH, Fla. (AP) — The first black driver to start the Daytona 500 since 1969 continues to blaze a trail at Speedweeks.

“A lot of stories, a lot of headlines being talked about,” Wallace said.

Wallace sparked plenty of his own.

He went 196.954 mph in the No. 43 Chevrolet for Richard Petty Motorsports, one more astounding moment in a week where he finished third in a Daytona 500 qualifying race and earned a seventh-place start on Sunday.

There’s only one box left to check on his list.

“To win something is good,” Wallace said.

He’ll have 39 other drivers to beat to the checkered flag on Sunday, including the favorite, 2012 Cup champion Brad Keselowski. Keselowski, Joey Logano and Ryan Blaney give Team Penske a potent 1-2-3 punch to win NASCAR’s marquee race. Blaney finished first and Logano second this week in a qualifying race used to set the field. Penske was mum on how he’d tell his drivers to race in the Daytona 500.

And if the three of them are competing hard on the final lap for a victory?

Wallace and 20-year-old Hendrick Motorsports rookie prospect William Byron are Daytona 500 first-timers and headline a crop of blossoming young talent NASCAR is banking on to lead the sport into the next decade. Three drivers under age 25 will start in the first two rows and there are six drivers under age 30 in the first eight spots.

Pole sitter Alex Bowman, who was often confused for a rookie in Daytona because of his one-year sabbatical, sits on the pole in the No. 88 Chevrolet for Hendrick Motorsports. He played it safe Saturday behind the wheel long held by the retired Dale Earnhardt Jr. and hit 191.160 in the fastest of his three laps.

While NASCAR is undergoing a youth movement, Danica Patrick is on her way out. Patrick was ninth-fastest in the final practice headed into her last NASCAR race. She will race the Daytona 500 and the Indianapolis 500 as part of a retirement tour she dubbed the “Danica Double.”

Patrick starts 28th on Sunday. Green Bay Packers quarterback Aaron Rodgers watched his new girlfriend race this week from the top of her pit box and will attend Sunday’s race.

Rodgers might run into a familiar face among the QB fraternity at the track — retired great Peyton Manning will drive the honorary pace car.

Chase Elliott won a qualifying race to give team owner Rick Hendrick a win at Speedweeks and the pole for the Daytona 500.

Both are firsts for Chevrolet’s new Cup effort, the Camaro.