‘The Marauder’ will suck you into the swamp 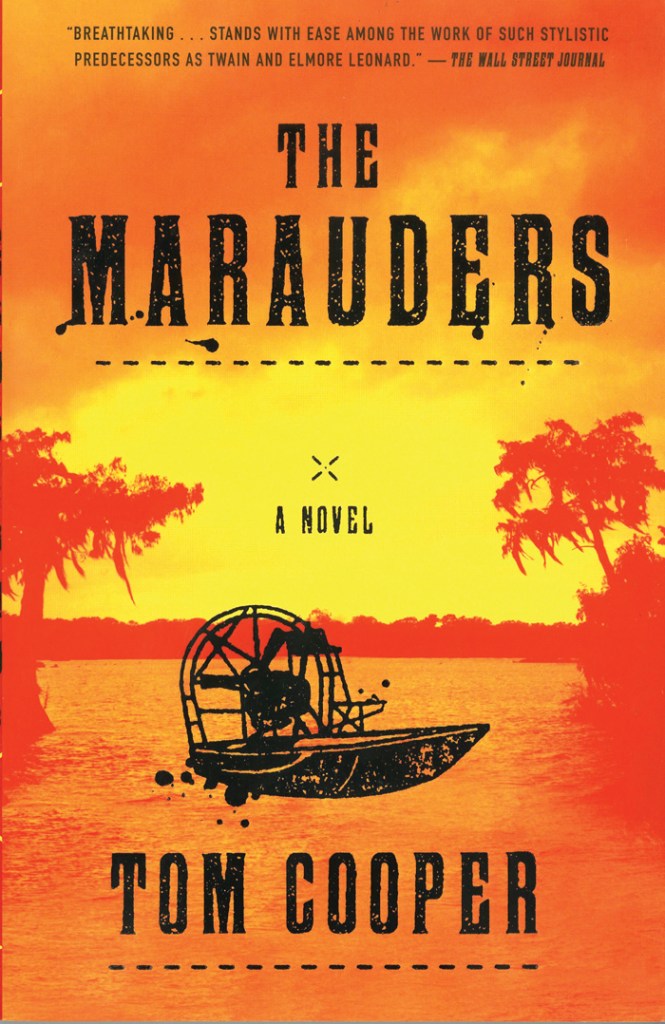 Tom Cooper’s novel, “The Marauders” is a fast read, fast like the alligators feeding in the swamp.

Colorful does not begin to describe his characters, who all have some aspect of swamp color to their faces or clothes or mannerisms.

The characters are vivid, each with his own — for women have very little part in this — quirks, demons, disappointments, addictions.

With a crazy story involving drugs, lost treasure and the BP oil spill, Cooper shows both the misery of folks in a dying fishing village in Louisiana and their determination.

The question here is, who are the marauders? Well, just about everyone, in his own way. And what are they after? Some are just trying to survive; others are greedy and will fill their pockets without concern for the consequences. And still others are trying to figure out if it’s time to get out of the swamp for good or honor its hold and history.

It makes for eager reading, dripping with the atmosphere of the bayou, even smelling of it when you slog through the mud and the talking cypress knobs.

The opening paragraph gives you the flavor of what’s to come, sets the tone and lets you know you’re in for a hot, sweaty, dangerous trek: “They came like specters from the dark maw of the bayou, first ghostly light in the fog, then the rasp of a motor: an aluminum powerboat scudding across the lacquer-black water.” They are the twins, and they are big trouble.

The same paragraph ends with this ominous bit of history: “… and now their mother was dead. Shot through the temple in New Orlean’s Roosevelt Hotel before their father turned the gun on himself.”

If that’s not the start of noir novel, I don’t know what is.

Everyone in Jeanette, deep in the bayou, is looking for something, mostly a way out and above. The oil spill has killed the birds and fish in the water. The shrimp are shrunken and taste of petroleum. As if that weren’t enough, Katrina blew out any remaining hope, not just wrecking homes and boats, but lives.

Jeanette may not be a real town, but the Barataria Bay is, and it was a popular place with Jean LaFitte, the privateer. Look up Barataria, and Cooper has it down pat, an area that is marshy with many islands, noted for its shrimp industry and villages built on pilings above the marshes. The name is derived from the Spanish word meaning “to deceive.”

Almost every character in the book is out to deceive, except young Wes Trench, who’s trying to find his way, trying to get away from his angry father, then man who decided to stay through the hurricane, the one that drowned his wife, Wes’ mother, right in front of them.

There’s a crazy dude named Lindquist, another shrimper, minus an arm, then again minus his replacement arm. He’s a treasure hunter, still looking for whatever LaFitte might have left on one of the myriad ilands in the bay. Pain has filled his life, so his totem is a Pez dispenser filled with painkillers.

Those twins, Victor and Reginald Toup, have very right to be crazy, considering what happened to them. They’re also crazy mean, especially Victor, who tends to solve problems with a gun. They have built their own industry in the swamp, and it has nothing to do with shrimp.

Slime factor is compounded in Grimes, a Baratarian, who now works for the oil company trying to con his former neighbors into signing for a cheap settlement that will not begin to cover their losses. He hates the job, hates being there, where his mother still lives, and avoids her. The people he approaches hate him, too, and take what revenge they can on him.

The other players in what turns out to be a deadly game are Cosgrove and Hanson, two screw-ups who meet doing community service. They only compound their minor crimes during that stint, then get sucked into something even bigger that will prove to be the biggest mistake of their lives.

Cooper alternates chapters among these characters, also introducing folk who could only exist in the backwaters, separate from society and distinctly damaged in one way or another.

Just a couple of pages into the book, you’ll be sucked in, whether by the mud, or the heat, or the intrigue. Cooper will lead you into a lush, fully developed, smart adventure. Don’t miss it.