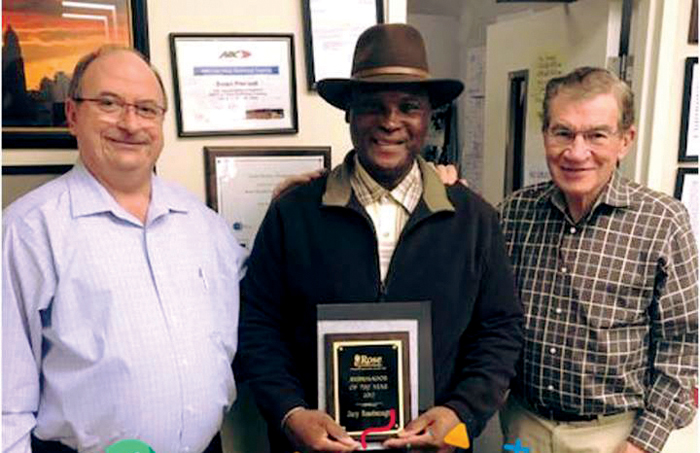 Salisbury native Gary Roseborough has been named Rose Chauffeured Transportation’s Ambassador of the Year for 2017 as well as Chauffeur of the Month for January 2018.

Roseborough previously has been featured in the Salisbury Post and Charlotte Post. He is known for handing out small metal crosses and being a designated Carolina Panthers driver for 22 years with Rose Chauffeured Transportation, based in Charlotte.

To date, Roseborough has passed out over 10,000 crosses and gives credit to Phil Fuller of Fuller Welding and his family for their support in making these crosses over the years.

As described in the past, Roseborough overcame considerable hardships as a child.

“Through it all, his faith in God and belief has strengthened him to live a successful life,” Rose Transportation said in a press release. “The words from his foster parents still reign with him and he lives by those words today. Those words were ‘Sit down, shut up, and listen to the Word of God.’”

Gary has driven throughout the United States and Canada and has cruised many islands in his work for Rose Transportation. He says he has never taken a vacation in which he has not had to drive the bus.

“He is grateful to have visited many exciting places and met so many amazing people,” Rose Transportation said.

Gary likes to play the Powerball and Mega Millions twice a week and says if he ever hits the lottery his dream is to open a “spiritual shelter” in Salisbury that would help people turn their lives around with faith in the Lord.

The shelter would provide programs, food, shelter and spiritual messages with only good news, he says. “You can believe that I wouldn’t buy a mansion or a fancy car,” Roseborough adds, “I would use the money to help change lives of struggling people.”

When Gary is not working, he travels to Salisbury to spend time with family and friends. He is proud to be the driver for the Panthers, and Rose Chauffeured Transportation said he is greatly appreciated by the players and owner Jerry Richardson.