Oops! Don’t forget that miracles can happen in sports 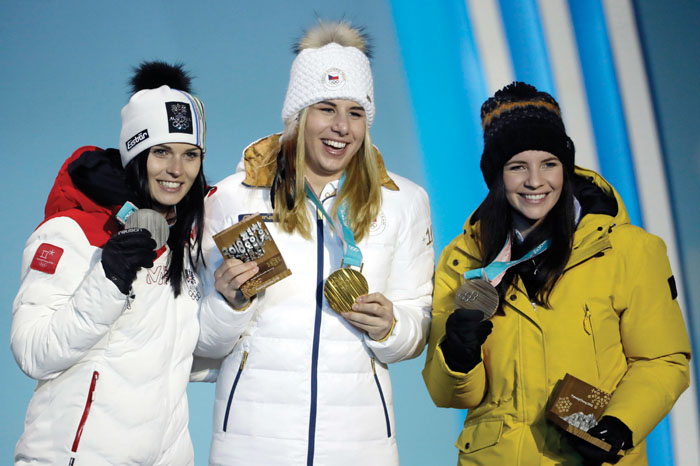 OOPS: Athletic miracles do happen, and the one performed by little-known Ester Ledecka of the Czech Republic on Saturday caught NBC flat-footed. Toward the end of the women’s super-G competition, NBC’s Dan Hicks declared Austria’s Cornelia Huetter as the only skier with “any real chance” of beating teammate Anna Veith. When Huetter fell short, Hicks said that “it’s Anna Veith of Austria who repeats as Olympic super-G champion.” That made it four straight Olympic gold medals in that discipline for Austria, he said. As the pictures showed an emotional Veith, Hicks said she “just about can’t believe it.” After a commercial, NBC switched to figure skating, leaving viewers with the impression that the race was over. It wasn’t. NBC had to break in later with the news that Ledecka had beaten Veith , and showed her winning run. There’s no shame in thinking Veith was the probable winner and the broadcast moving on; even Ledecka was stunned by her win. After Huetter’s run, The Associated Press wrote that Veith was “on the brink” of defending her gold medal. But probable isn’t the same thing as certain, and Hicks was burned.

RATINGS: The 19.2 million people who watched the Olympics on NBC, NBCSN or on streaming services Friday was identical to the 19.2 million NBC viewers for the corresponding night in Sochi in 2014. In today’s television world, that’s a victory. The Nielsen company said 16.6 million people watched NBC alone on Friday. NBC notes that the dominance of Olympic coverage over other things on TV is unmatched; on Friday, competitors ABC, CBS and Fox combined reached just 8.1 million viewers.

GANGNEUNG, South Korea (AP) — Adam Rippon put his hands over his face and let the cheers wash over. He waved and smiled, and when the crowd kept clapping, he jumped where he stood and swung his arms to egg them on.

Ever the showman, and with his trademark grace and flair, Rippon took his final skate of the Pyeongchang Olympics on Saturday. He finished 10th, a fine result for a 28-year-old who was never expected to medal against a field populated by younger, higher-flying competition.

The self-proclaimed “icon” didn’t need that hardware to leave his mark on these games.

Or for the Olympics to leave its mark on him.

“They usually say that like, after the Olympic Games, somebody’s life changes forever,” Rippon said. “A lot of times it’s the gold medalist, but I have a feeling that my life has changed forever.”

Rippon has been the headline-grabbing darling of the Pyeongchang Games, a status earned in part with his near-flawless skating, but even more with his efforts off the ice.

He and skier Gus Kenworthy are America’s only two openly gay male athletes, and they’ve flaunted their LGBT pride on social media throughout the Olympics. Kenworthy and his boyfriend were in the stands to watch Rippon on Saturday, waving an American flag with rainbow patterning in place of red and white stripes. Rippon said he plans to watch Kenworthy compete, too.

Rippon’s path to Pyeongchang included a public spat with Vice President Mike Pence, whom the LGBT community considers an opponent for signing the Religious Freedom Restoration Act in March 2015 as Indiana’s governor. Critics said the legislation encouraged discrimination against gay people. An amendment with protections for the LGBT community was passed a week later.

Rippon criticized the White House in January for choosing Pence to lead its official delegation for the opening ceremony. When a USA Today report said Pence was hoping to sit down with Rippon, the figure skater said he had no interest in meeting with Pence until at least after the games.

The “brouhaha” — Rippon’s word — mostly dissipated as he made his Olympic debut. He helped the Americans win a bronze medal in the team event, then put on a pair of clean skates in the individual competition.

All the while, he charmed away during interviews with his striking ease and wit. His personality — he proudly told The Associated Press in November he’s “a little trashy, but really fun” — cemented his Olympic stardom, catching attention from stars including Reese Witherspoon and Elmo.

How does he feel about that?

“Well, you know, on the spectrum from Reese Witherspoon to Elmo, I’m like excited at about, like, a Meryl Streep,” he told NBC this week. “Does that make sense?”

Those around him say the buzzy one-liners aren’t an act. Fellow American skater Ashley Wagner said this week that “he’s like this 24/7. It’s exhausting.”

A taste of Rippon’s best work just from Saturday:

—On his plans for the rest of the Olympics: “I’m probably going to have like a stiff drink later.”

—On the Olympic spotlight: “Sometimes I just get attention, and I really don’t know how it happens.”

—On his legacy: “You know, I’m not like a gay icon, or America’s gay sweetheart. I’m just America’s sweetheart and I’m just an icon.”

Certainly, this month has opened doors for Rippon. He wouldn’t say for sure Saturday that he’s ready to retire from competition, but at 28, he seems unlikely to keep going much longer.

He’d be a hit on television — perhaps following in the footsteps of fellow American skating star Johnny Weir, now a personality on NBC who helps host figure skating and Kentucky Derby coverage. There’s no doubt that if Rippon wants, he can parlay his celebrity into some sort of public post-skating career.

With what he showed in South Korea, it’d be surprising if he doesn’t want that.

He’s given the world a taste of himself, and even after he’s done skating, it’s going to want more.