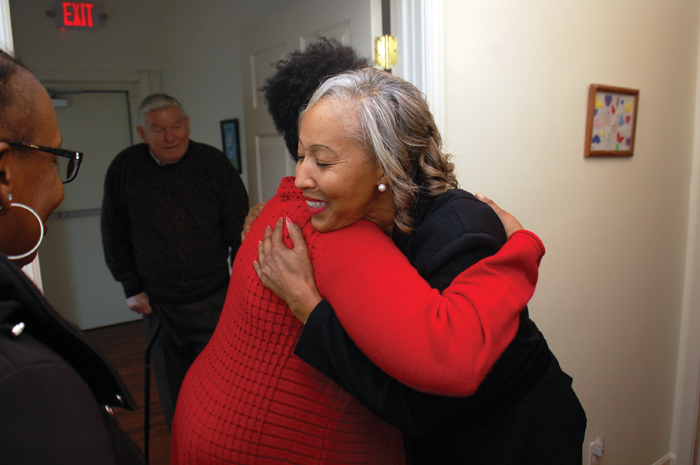 SALISBURY — Gateway Freedom Center is all about second chances.

The center, located at 1315 N. Main St., aims to help men coming back into society whether it’s from prison, the streets, drug and alcohol abuse or bad family situations.

In a way, it’s also a second chance for Executive Director Kathy White, who back in 2014 had opened the Gateway Freedom Center as a transitional refuge for women in similar situations.

After about a year of helping close to 100 women and housing around 75,  White saw funding sources for the faith-based nonprofit run out.

“Then the Lord closed it, and when He closed it, I was devastated,” she said Saturday.

Much prayer, soul-searching and affirmations from those who believed in White’s mission followed. It all led to Saturday’s grand reopening of Gateway — this time for men — and a celebratory open house from 11 a.m.-3 p.m.

Salisbury Mayor Al Heggins toured the facility, which is the former Weaver Electric building, as did many of the other visitors.

“This is what changes our city, what gives strength and light to our city,” Heggins told the open house crowd during a brief ceremony.

The mayor read a resolution from the city in support of Gateway Freedom Center’s mission, but she added, “We know where the real work happens, and I want you to know I’m here for the real work.”

Some members of the Gateway Freedom Center board on hand Saturday included Pastor Tom Teichroew, Dr. John Reeves, Bonnie Ellis and Mack Leach. Teichroew serves as chaplain for the Police Department and YMCA.

Reeves is director of Hope Lane Ministries. Leach described himself as a fighting Christian of the Refreshing Spring Worship Center.

Toney Snipes, who owns Snipes Benefits Solutions and is associate minister at the Word of Life Family Worship Center, will serve as the Gateway Freedom Center’s counselor. David Bush will be helping men make transitions from prison and assisting at the Thursday evening support groups.

Snipes said he sees his role as trying to generate confidence in the men who will be staying at the center, give them an understanding of where they are and where they want to be. He also wants to focus them on not going back to where they were.

Snipes said it’s a good opportunity to redefine who he is, too, and give back to the community, offering hope and love to the lost.

“I have a responsibility,” said Snipes, who expects to provide counseling at the center about three times a week, while also attending the Thursday support group.

Gateway Freedom Center’s extensive renovations in 2014 led to seven rooms upstairs, which can house two men to a room, or 14 total. The upstairs also includes two day rooms, a large bathroom with a couple of showers and a chapel.

Plans also are in the works, according to White, for renovating unused space for a 75-seat cafeteria, a larger kitchen and laundry.

After it undergoes renovations, a house toward the rear of the property can provide temporary housing for families. The center also is interested in a three-bedroom house in East Spencer for transitional housing, according to White.

White has said programs at the center will help residents work on things such as personal goals, anger management, employment, drug resistance, life skills and health.

Referrals to the center, she has said, will come from a host of agencies, such as Family Crisis Council, prisons, jails, the judicial system, Rowan Helping Ministries, Bethel Power of Faith Ministries, Grateful Heart Ministries, Goodwill Industries, the Department of Social Services, local housing  authorities and Capstone Recovery Center.

“God is awesome, He’s powerful — we all have a call,” White said.