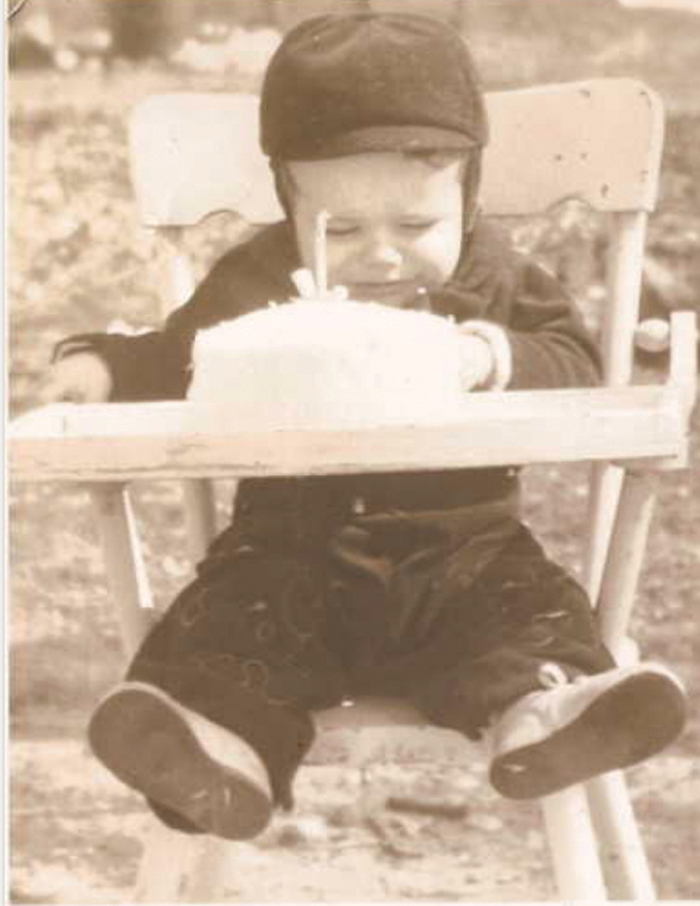 Mack Williams at his 'first' milestone.

I recently heard someone talking about the various milestones representing the progression of his life, and that made me think about the definition of “milestone.” The “nitty-gritty” is basically a series of markers placed along a route, providing reassuring measures of distance and the additional reassurance that someone is traveling in the right direction, based on the destination to which they hope to arrive.

Milestones stretch (figuratively and literally) back to Ancient Rome, and it might also be said the Ancient Romans had a good “sense of direction” in spreading Western Civilization! Because of the many Roman firsts, an old phrase can be paraphrased to say, “All roads still lead to Rome.” I think the spirit of my former East Rowan Latin teacher, Mrs. Thayer Puckett, is nodding approvingly at me from Heaven (not from the Elysian Field, because despite her love of Ancient Rome, she was a fine Christian lady).

The most important milestones which we architect for ourselves are parents, spouse, and children (the last, we actually have a hand in making).

Then there are those milestones of time, for which we only have to try our best to remain alive. That’s sometimes not as easy for some (note the annual winners of the Darwin Awards). It’s always best to match our increasing number of years with a basic modicum of good sense.

One of my own “milestones of time,” my first birthday, with birthday cake is displayed in my picture accompanying today’s column. In it, I am “age, one year,” so that means the date pictured is March 5th, 1952. I don’t know why I was so upset; perhaps I had misgivings early on about growing old.

There’s another picture somewhere of me at age one, posing with my ten-year older brother Joe. In it, I’ve got some silly grin appropriate for a one-year old; and Joe has a half smile appropriate for a big brother who for ten years had his parents to himself, until “something” appeared.

Twenty-nine years, to the day (3/5/81) forward from that picture of one-year-old upset-kid-in-high-chair-with cake (3/5/52), I turned 30, another chronological milestone (that’s the thing about birthdays and calendars, you can achieve pinpoint accuracy in figuring). My late wife Diane threw me a surprise 30th birthday party; and among those invited were the members of our church choir at the time. Since then, Diane and several of them have passed on, representing a melancholy milestone.

I think stumbling blocks are milestones too, though at the time, instead of “milestones,” they seem like Biblical “millstone” necklaces. The lesser ones can be likened to that smart-ass kid in class who sticks his foot out at the last minute, tripping a passerby (then having the audacity to giggle). Many can be viewed with the “half-full- instead-of-half-empty” view with passage of time, but it’s impossible for me to do so in the case of my father’s (Bernard Williams) early death in 1966 at age 60 (nowadays, 60 is the new 40, or 35, or something or other). Life being viewed as being in the ocean, I could have used that supportive “continental shelf” for a good while longer, but instead, there was seismic shifting, fracturing, and breaking away.

As far as the word milestone goes, those gravestones placed beside the graves of friends and loved ones are like milestones too, for each of those dear ones walked with us on our life’s road, some more, some less. Those with the most “mileage” stand out starkly in “Ramessean” size (not to be confused wih “The Ramesseum,” Pharaoh Rameses II’s funerary temple).

Other milestones are in the nature of good friends and family who were there for us at particularly trying, even desperate times in our lives, like a series of stepping stones which have been “scoured” into sight by descending (“maelstrom-like”), churning eddies in a treacherous and swollen stream we are attempting to cross. They’re also like heretofore hidden pathways suddenly appearing in the nick of time in an Indiana Jones movie.

As you can easily see by what I’ve set forth in today’s column, milestones in their expanded definition can mean much more than just the original two-dimensional measures of land’s length and breadth, but additionally, measures of a much greater dimension called “life.”

Learn more about life hacks for a clean, organized…