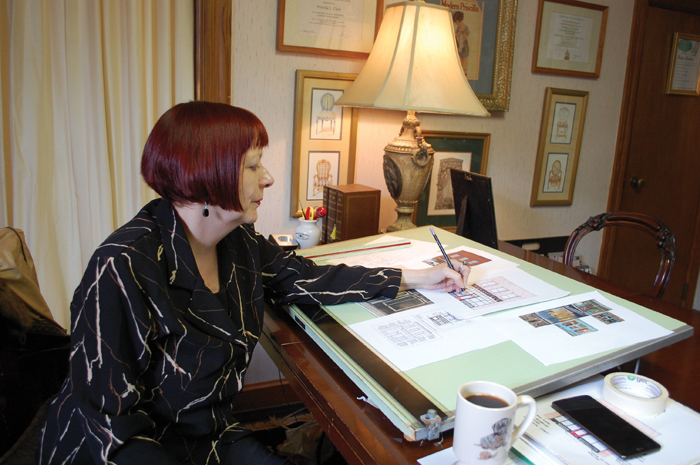 Priscilla Clark works on the sketch on what her soon-to-be store will look like. The store — Priscilla's — will be located at 119 West Innes Street, where Sidekick Karate used to be. (Jessica Coates/Salisbury Post)

SALISBURY — Priscilla Clark has been a constructivist steel sculptor, a fashion designer and a business owner.

But she said the business she owns — Great Finds and Designs Interiors and Consignment — has never really felt like hers.

“I took this business over from another person who retired and moved to Florida. So she had a basic model in place, and that’s fine,” Clark said. “But the thing I find when you take over someone else’s business, people are used to dealing with that person.”

Clark said she enjoys vintage and antique pieces, which make up a large portion of the store’s inventory. But she said she doesn’t like that it’s primarily a consignment store.

“I enjoy picking and finding things. That and interior design,” Clark said. “This is too much about taking in consigned goods and selling them for other people. And it’s not really what gives me joy in life.”

After nearly two years of running Great Finds and Designs— located at 429 North Main Street — Clark said she’s ready to start a shop that is all her own.

“The store is going to be half interior design studio, where people can come in and they can pick tile samples, backsplash, wallpaper,” Clark said. “And then the other half of the store is going to be more vintage antique with new pieces mixed in…because I personally like doing that. I think the design tension in between dissimilar elements is interesting.”

Clark said the new space, which will be at 119 West Innes Street, will be “reflective of me.”

Clark said she decided to specialize in historic preservation after attending interior design school and that she’s “been into old things” since she was a child.

She said she intends to restore the storefront of 119 West Innes “to its former glory.”

“I’ve been doing a lot of research on Main Street historic storefronts and I’ve been looking at some that are in operation,” Clark said. “So basically I’m trying to make it look more in keeping with the time period that it was actually built in.”

She said the city has been “great” in helping her navigate the parameters of what can and can’t be done in a historic district.

“They’ve been working with me very cooperatively because everybody knows that Innes is kind of the gateway to Salisbury and when people are passing through, this is the impression you have of the town,” Clark said. “If it looks like a bunch of desolate storefronts that haven’t been taken care of in years, people are going to go, ‘Well forget that, dear, let’s keep driving.’”

Clark said she is working with other business owners on the 100 block of West Innes, like Sparrow’s Nest and The Brown Eyed Suzy, to make the strip look “vital.”

“Everyone on the 100 block is really pushing to make this happen, to really make that block active and interesting and to make it a shopping destination,” Clark said.

Clark will keep Great Finds and Designs open until March 15 and she said that, until then, she will be having a liquidation sale on many of her décor items.

The store will be open Wednesdays, Fridays and Saturdays from 11 a.m. to 5 p.m. until March 15.

She said she is hoping to open her new store, which will be called Priscilla’s, just before Easter.

Once it opens, the hours for Priscilla’s will be 10 a.m. to 5 p.m. Tuesday through Saturday, with Thursday being by appointment or “by chance” only, she said.

“’By chance’ means that if I happen to be there and you see me, I’ll open the door and let you in,” Clark said.

Clark said she also planned to have rotating artist exhibitions and design classes at Priscilla’s once it opens.