Insight: Yusor, Razan and Deah: They should be remembered for how they lived, not how they died 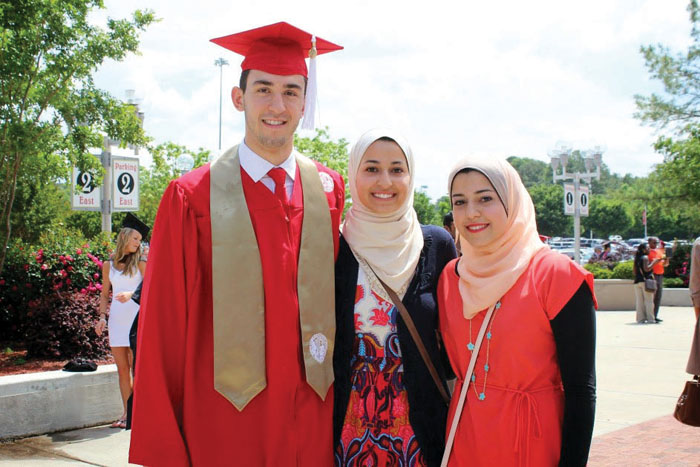 Editor’s note: Feb. 10 marked the third anniversary of the execution-style shooting deaths of Deah Barakat; his wife, Yusor; and Yusor’s sister, Razan Abu-Salha at the couple’s Chapel Hill condominium. The three young adults — 23, 21 and 19, respectively — were killed by Deah and Yusor’s neighbor, Craig Stephen Hicks, in what evidence would show to be a hate crime against the Muslim victims. The Barakat family had strong connections to Salisbury. Before he was born, Deah’s parents, Namee and Layla Barakat, lived in Salisbury, where Namee managed a Hardees restaurant. Deah’s uncles, Najib and Naberg, also lived in Salisbury and worked many years for Power Curbers before the whole extended family moved to the Triangle area. The Barakat family also were close friends with Joanne and Jack Eichelberger of Salisbury. Mohammad Abu-Salha, father of Yusor and Razan, wrote a letter to Muslim Advocates Publicity Director Scott Simpson on the third anniversary of the shootings. Simpson and Muslim Advocates agreed to share that note with the Salisbury Post. Here’s what it said:

Six weeks before my daughters, Yusor and Razan, and my son-in-law, Deah Barakat, were murdered, I danced with Yusor at her wedding.

Less than two months later, all three of my children were savagely shot execution style in their own apartment by a neighbor. They did nothing to warrant the attack. They did not deserve the horrific way they died. They were simply targeted by a man with hatred in his heart.

That was three years ago today. Some people now associate the names of my children with how they died, but Yusor, Razan, and Deah should be remembered for how they lived.

Yusor was 21, passionate about serving others and about to start at UNC School of Dentistry with the love of her life, Deah. She volunteered at a dental clinic in Turkey for Syrian refugees, and she helped build Habitat for Humanity houses in Raleigh. She loved her school so much that she often wore her headscarf in the school colors of blue and orange.

Razan, our youngest, was 19 and loved nature, sports, music, animals and arts. She was studying architecture at NCSU. After long school days, she stayed up nights painting doves symbolizing peace, which she sold to raise money for humanitarian projects in the Middle East.

Deah was 23 and larger than life — tall, handsome, loving, caring and passionate about community service. Deah would never brag about this himself but his professors at UNC told me later that he was following a track that would qualify him as an oral surgeon.

All three of them lived their lives with overwhelming kindness. It was quite typical for the three of them to spend many Friday nights cooking in our kitchen to deliver hot meals the next morning to the hungry and homeless.

They had all been kind to the man who went on to murder them, despite the fact that he made it clear that he did not want them in his neighborhood. He had never brandished a gun until Yusor moved in and Razan began to visit, both wearing their headscarves, as Deah looked like an average white all-American college student in sporty attire.

Not long before they were killed, Yusor told me, “he told me he hated us for how we dressed and how we looked.” She believed she could win him over with kindness — that love would ultimately win, but I wasn’t so sure. I wish I did not ignore my instincts.

I still believe that love will win in the end.

Even before officially informing us of our children’s death, the police in Chapel Hill, North Carolina, told the media that their murders were most likely because of a parking dispute. They automatically ruled out hate as a motive as soon as the murderer told them the version that he wanted aired.

Our families waited at the neighborhood’s clubhouse for more than four hours before an officer would tell us, “They all passed, but at least it was quick, bullets to the head.”

Although the Chief of Police has since apologized to us for so quickly diminishing their murders, that apology cannot unring the bells of how the media portrayed the story in the immediate aftermath.

Any police department should know that jumping to conclusions before even talking to the victims and their families is foul and irremediable — especially at a time when there is a ruthless, well-financed and flourishing campaign against Muslims.

But our families’ encounters with law enforcement have taught us that many states do not even have hate crime laws, and federal hate crime laws desperately need to be revisited in order to be more clearly defined.

While many latched on to the “parking dispute” narrative, within hours, people around the world had decided what happened. They affirmed for us what we already believed, that this was a hate crime.

In the three years since Yusor, Razan and Deah died, hate crime rates have continued to rise. Too many families live in fear, knowing that what happened to my family could happen to theirs.

Too many families lose sleep at night, knowing the impact that hateful words from politicians, political pundits and extremist media are having across the United States and how they can incite violence. The only way that we can fight back against the violence is in the same way our children lived their lives — with love and kindness.

Meanwhile, we can continue to hope that justice should and will be served.

For that to happen, it’s important that we report any form of violence or hate to law enforcement when we are targeted by or witness it and that we tell our stories, loudly, for the world to hear.

I believe that when we show ourselves to the world, when we let them see our pain and our triumph, they will stand with us.

That’s why I am writing you today, to ask you to share your story with Muslim Advocates. They stood with our families in the wake of our pain and our loss, and they will stand with you, too. If you have been the victim of hate, or if you have witnessed it, please respond to this email and share your story. No story is too small — Muslim Advocates is here, and they want to listen.

Together, we will win.