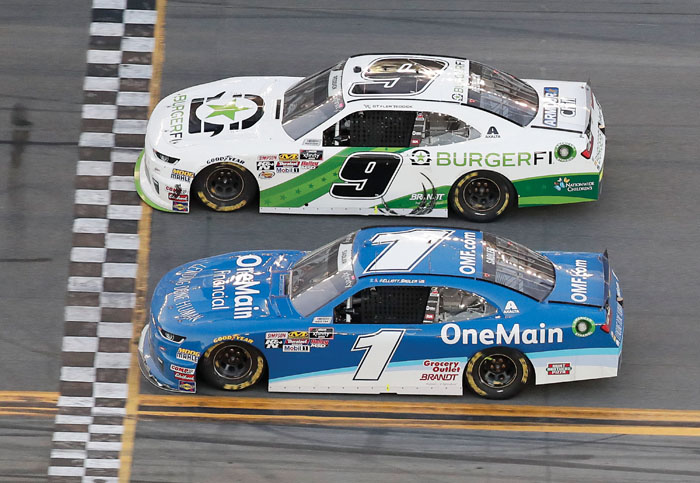 Reddick won the Xfinity Series’ season-opening race by beating JR Motorsports teammate Elliott Sadler in a photo finish. The margin of victory was 0.000 seconds, breaking the mark set by Butch Miller when he beat Mike Skinner by 0.001 seconds to win the Truck Series race July 15, 1995 at Colorado National Speedway.

“How do I protest that? It’s a tie, and it should go to the elder,” joked veteran Sadler of the win that went to the 22-year-old Reddick.

Reddick later joked a protest was still a winning proposition for the organization.

“Either way, JR Motorsports wins, right?” Reddick said. “That was insane. I saw a picture of it 10 minutes ago and it was just enough.”

It was a nail-biting and tense opener at Daytona International Speedway for NASCAR’s second-tier series, which celebrated its 100th race sponsored by Xfinity on Saturday.

The victory came in Reddick’s debut race for JR Motorsports, the team in part owned by Earnhardt Jr. This is Earnhardt’s first season in retirement from full-time racing and his presence at the race track is still strong through his race team.

JR Motorsports has won five of the last nine Xfinity Series races at Daytona, and Reddick’s victory led a 1-2 sweep for the company.

“Either way, fine with me,” Earnhardt said of the finish. “I watched the whole thing, it was incredible. I was surprised by the amount of overtimes. Fans want to see a green-flag finish and NASCAR tries everything it can to give them that opportunity.”

Sadler was temporarily crestfallen. Sadler finished second in the 2002 Daytona 500 and was passed for the lead right before the rain came in the abbreviated 2009 race. His best finish in all three of NASCAR’s national series at Daytona is second.

“This one hurts a lot,” said Sadler. “I don’t know how many more starts I’ll have at this race track. I really want to get one of the trophies here at this place.”

For Reddick, it was his second Xfinity victory and in the biggest race to date of his career. He won once last year driving a partial schedule for Chip Ganassi, then moved to Earnhardt’s team this season.

“A hell of a way to start the year off with JR Motorsports,” Reddick said.

Ryan Reed was third, and Kaz Grala fourth, in Fords. Garrett Smithley was a career-best fifth and Daniel Suarez was the highest finishing Toyota driver in eighth.

Wood has done most everything at “The Great American Race,” driving in the inaugural edition in 1959 and winning five Daytona 500s as team owner. He not only had a seat somewhere at every Daytona 500, the 92-year-old Hall of Famer had attended every Speedweeks since 1947.

Wood will have a different view for Sunday’s race: from his home.

Although healthy, Wood decided to not make his annual trip from Stuart, Virginia, because of his age and the potential to catch the deadly flu virus sweeping the country. So he’ll watch from afar as Paul Menard drives the Wood Brothers Racing entry in the Daytona 500.

“With the flu and everything that’s going on everywhere, we just didn’t think the risk was there,” son Eddie Wood said. “He made up his own mind, we didn’t ask him anything. We were just like, if he wants to go, he’ll say so, and he just made the decision himself that he just didn’t want to risk getting sick.

Glen Wood always rode by car to Daytona Beach, driving a 1940 two-door Ford on his first trip in 1947. Wood took every ride through eight decades in a Ford.

“I keep thinking every day he’s going to call and say, ‘Send somebody up here to get me,’” Eddie Wood said.

Glen Wood won races in various series on the beach and finished 34th in his first — and only — Daytona 500 in a Ford, of course.

Eddie Wood told his dad there was no reason to push himself to attend the race.

“Nobody will ever break your record,” Eddie Wood said he told him. “I’m at 45. I’m not going to get there.”

Eddie Wood, a co-owner in the race team, was back at the track following a heart procedure in December. From his own experience in recovery, Eddie Wood said he’s sure his dad would be getting antsy at home missing the race.