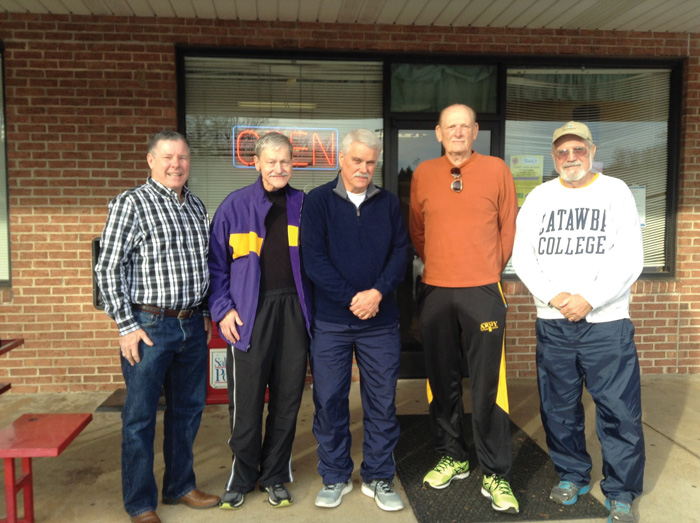 Running and sweating together is a great recipe for long-time friendship. I thought this was a perfect time to tell about a group that you might have seen on the streets that has taken the two ingredients to a wonderful place.

John Fisher remembers the first day that he ran with Jim Duncan. Fisher said, “It must have been 100 degrees and we ran 5 miles at lunchtime.” Duncan followed with, “He had a red face after that run and then he wouldn’t talk to me for three months!” They started running together in 1990 and are still at it in their 28th year. Ken Parr, Bucky Cline, James Taylor and Bob Bost join with Fisher and Duncan to make up the current group.

There have been lots of miles and a few marathons along the way as others have come and gone. But more importantly, their running has been about fellowship and camaraderie. And prayers are part of every run.

The men meet on Mondays and Wednesdays to run from Duncan’s house and on Friday they begin at the Hurley YMCA. Most of them make it to breakfast at Jeter’s Café following the Friday run, a regular habit for at least 10 years. Duncan said, “We have the authority to hold each other accountable but we have never walked away mad. We are all Christians too.”

Parr, the group historian, said, “Jim has been running for 55 years and I have for been at it for 45. Jim has pushed every grandchild in a race and he’s working on the great grandchildren. There is not a divorcee in the group but there are no rules. There is no judgement accepted for what or who these men are.” Parr recalled previous members, Greg Dunn and Paul Miller, who ran with the group for 10 years each and Donovan Hamm. He added, “Greg just stopped showing up without a word when he left us for pickleball! But we would take him back if he would buy breakfast for a year!”

Taylor, the unofficial jokester, calls himself the baby of the group at age 64. He said, “Even after eight years, I am still the youngest. Jim is the leader and John is the inspiration, but Bucky is the most reliable. I have been working at getting in shape because Catawba has a track team again. I still have a couple of years of college eligibility left. Ken got me started with these guys although he probably regrets it now. But I have never made a better decision.” Bost, only two weeks into the group, is 70 as are Cline and Fisher. Duncan is almost 76 and Parr is 69.

One of Taylor’s favorite stories involves his cabin in Valle Crucis where the men meet once a year for a couple of days of golf. Once, Fisher and his wife, Joy, used the cabin for a weekend and Taylor changed the name of the cabin from “Cozy River” to “Love Shack”!

The men all care for each other deeply. Fisher leads the group during their “Prayer Half Mile”. After his own battle with throat cancer, Fisher said, “There have been some tough times. But we have always been here for each other. We pray for each other first and then for every family member and others we know about.” Duncan added, “Bob had a prostate problem but we have all had issues of some kind. When we started, we could pray for the family members quickly but now there are so many that it takes a while.”

The men used to run at least 10 miles on Fridays but they stopped when Fisher returned after his throat cancer. They started over, walking a block, then two until Fisher could do more.

And they have fun on their runs too. The runners used to pass by the home of Rufty Patterson and holler for him to get up, now they do the same for his daughter, Joy. Donnie Clement gets a wake-up shout too. They get lots of waves and greetings, especially from dog walkers and East Spencer folks and a lady named Grace who has been watching for the group each morning for 6-7 years.

Duncan summed it up for everyone, “Most people are fortunate to have just one friend that they can count on, that one person who will be there for you no matter when you need them. Each one of these men is that friend.” Then Taylor concluded, “If I needed help at 2am, I wouldn’t hesitate to call any of them.”

For now, they’ll just keep running and enjoying each other.

Centenary Methodist hosts the Will Run for Food 5K on Saturday, February 24th. The next Beginning Runners Class starts on March Tuesday, March 13th at Novant Health. Look for the information on these and other upcoming running events and classes at www.salisburyrowanrunners.org