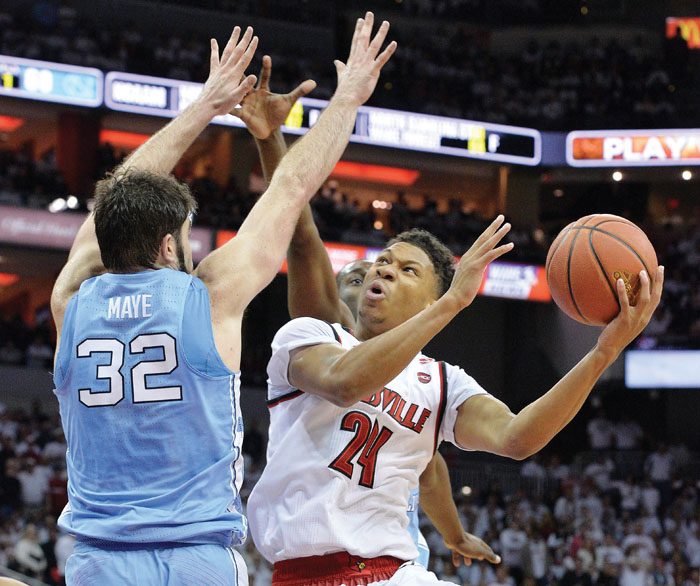 LOUISVILLE, Ky. (AP) — North Carolina got the fast start it sought against Louisville and the No. 14 Tar Heels displayed that energy in numerous areas, giving coach Roy Williams a lot to like — for the most part.

Joel Berry scored 23 points, Luke Maye had 19 with 13 rebounds and North Carolina dominated the boards and second-chance points to beat the Cardinals 93-76 Saturday night for its fifth consecutive victory.

The Tar Heels (21-7, 10-5 Atlantic Coast Conference) scored 10 straight points for a 12-3 lead before warming up from long range to eventually build a 19-point cushion before withstanding several Louisville rallies. UNC made eight from behind the arc in the first half alone and 12 of 27 overall in a fast pace that Louisville struggled to keep up with.

Most impressive for the Tar Heels was doing all this as leading scorer Luke Maye tried to get going offensively.

The junior forward had just two points on 1-of-5 shooting in the first half before making 7 of his final 13 attempts. Maye’s rebounding offset that slow shooting start, helping the Tar Heels win the glass 44-32 and frequently get timely offensive boards to outscore the Cardinals 22-6 in second-chance points.

Though UNC’s defense struggled at times, it still held Louisville to just one free throw over the final 3:06.

“All in all, we really played well,” Williams said. “I didn’t like our defense, but I haven’t liked our defense all year long. Maybe we’ll get it changed before I turn 90. But we made shots and guys made plays.”

Louisville (18-9, 8-6) got within single digits several times but no closer than seven in having its two-game winning streak end. Deng Adel returned from a two-game absence with an ankle injury to score 20 points and Ray Spalding 18 with 12 rebounds.

Maye wasn’t bothered by a first half in which his lone basket came late on a tip-in. If anything, that play typified the Tar Heels’ hustle and it was just a matter of time before he found his offensive flow.

“It wasn’t only one play that made it,” Maye said. “I was struggling from the beginning. It’s not all about me. We were winning, had a good run going.”

North Carolina: Being in the right place at the right time throughout helped the Tar Heels finally break through in Louisville. That’s no surprise considering they entered the game outrebounding opponents by a margin of 11.7, and they grabbed 17 offensive boards. Every time Louisville seemed intent on making it a game, they’d answer with a 3 or come up with a rebound and putback to stay safely ahead. They shot 48 percent and broke 90 points for the third time in their current streak.

Louisville: The Cardinals’ bench dominated 35-9 thanks to Adel, who came off the bench to make 8 of 12 from the field. But they couldn’t stop Carolina from getting multiple chances at the start and lost the paint battle 42-38. Most importantly, they missed another chance to get their signature win they’ve sought all season.

“I told Roy if they shot like that it’s going to take a heck of a team to beat them,” interim coach David Padgett said. “They seemed to counter every one of our runs with a run.”

Louisville visits Duke on Wednesday night in search of its first win at Cameron Indoor Stadium since joining the ACC.