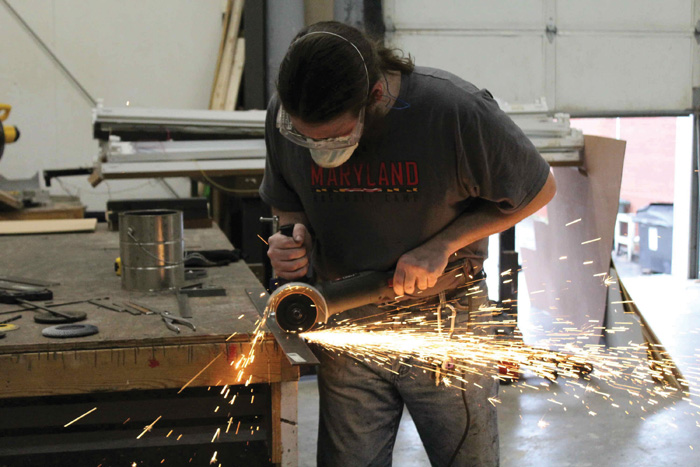 Jones cut, tapered, ground, shaped and sanded until he had a sword that could hold up to the beating and banging of the Norvell Theater’s teen-aged Roman army.

By Josh Wainwright for PPT

When Director Reid Leonard was planning for PPT’s latest youth production, Shakespeare’s “Julius Caesar,” he wanted to have the authentic sound of swords clashing together in the many battle scenes. The best way to do that was to have the cast use real steel swords … so in steps PPT’s long-time craftsman extraordinaire, Allen Jones.

One of the most skilled craftsmen in the theatre community, Jones once carved a stage full of dinosaurs out of foam using nothing but a carving knife for PPT’s “Magic Tree House-Dinosaurs Before Dark.” This time he was tasked with creating a dozen Roman-looking swords out of metal.

Bladesmithing/swordsmithing — the art of making knives, swords, daggers and other blades — has been around for thousands of years and has been found in cultures as diverse as China, Japan, Germany, Spain, the Middle East … and now Salisbury.

“These swords needed to be made quickly, simply, and be robust enough to hold up through the constant abuse that learning stage combatants would surely put them through,” says Jones.

The Roman sword of choice was the Gladius (Pompeii style), because of its simple shape and shorter length. Starting with a simple flat piece of steel that was 2” by 3/16” thick and 3 feet long, Jones cut, tapered, ground, shaped and sanded until he had a sword that could hold up to the beating and banging of the Norvell Theater’s teen-aged Roman army. (Then he repeated the process 11 more times!)

You can see the swords created by Jones on stage in Piedmont Players Youth Theatre production of “Julius Caesar” at the Norvell Theater this Friday and Saturday at 7:30 p.m. For tickets call 704-633-5471 or purchase online at PiedmontPlayers.com