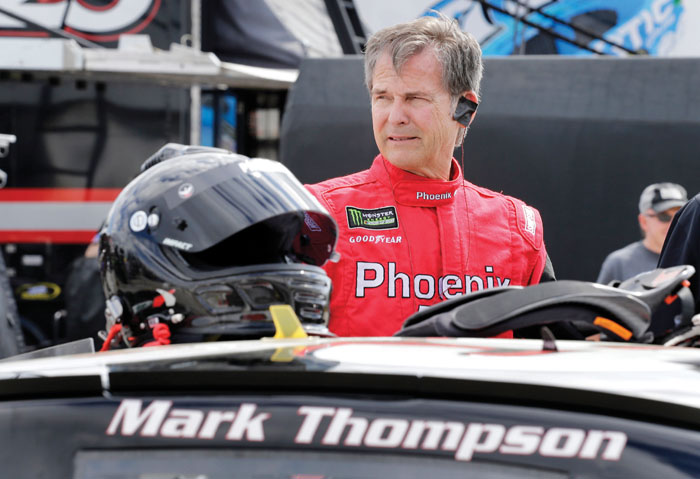 Mark Thompson prepares to climb into his car before practice for the NASCAR Daytona 500 auto race at Daytona International Speedway in Daytona Beach, Fla., Friday, Feb. 16, 2018. Thompson, 66, will start 40th in the race. (AP Photo/Terry Renna)

DAYTONA BEACH, Fla. (AP) — The oldest driver in the Daytona 500 field is truly a race veteran. Mark Thompson did a tour of duty in Vietnam that wrapped two decades before his NASCAR debut.

Never heard of the racing sexagenarian?

—He made his Cup debut at Pocono in 1992 against the likes of Dale Earnhardt and Alan Kulwicki.

—He’s the oldest pole winner for any Daytona race.

—The 66-year-old Thompson puts a surprising bow on his racing career when he becomes the oldest driver to ever start the Daytona 500.

When he fires the engines next week, it’ll be back at his day job as a pilot for the Phoenix Air Group he founded in 1978.

Thompson decided to give it one final run in the No. 66 (get it?) Ford and said the Daytona 500 will be his last race in any series.

“I’m in reasonably good shape and I have other things I’d like to do,” he said.

Thompson is a veteran of the ARCA Series and became the oldest pole winner at Daytona International Speedway at 63 in the series’ season-opening race in 2015. He was 39 when he made his ARCA debut at Daytona in 1991 and won two races in the series over 100 career starts.

Thompson, thin, fit and looking younger than his years, failed in his attempts to qualify for the 1993 and 1994 Daytona 500. His realistic goal is to finish the race in the Ford he got from Richard Petty Motorsports and to stay out of the way of the leaders.

Thompson may have a caught a small break for “The Great American Race” when the entry list featured only the maximum 40 cars. He starts 40th.

He doesn’t really know the rest of the drivers in a field that has six drivers under the age of 30 in the first eight spots.  Rookie driver William Byron is 20 and Hendrick Motorsports teammate Alex Bowman is 24.

Thompson completed only eight of 200 laps in a race at Pocono (at a spry 40) and finished 25 laps in his Cup return last year at Talladega. Thompson’s start in the ‘92 race makes him one of only three drivers — along with Ryan Newman and Kurt Busch — in the Daytona 500 field who have raced against Earnhardt. Earnhardt was killed on the last lap of the 2001 race and would have been 66 this year.

NASCAR has no age limit. James Hylton is the oldest driver to start a NASCAR race. He was 76 for the 2011 Truck Series race at Pocono.

Before he became interested in racing in the late 1980s, Thompson was an Army helicopter pilot in Vietnam from 1970 to 1972. He declined to discuss his experience.

“They taught me how to fly,” he said.

He founded Phoenix Air, headquartered at the Cartersville-Bartow County Airport in Atlanta, and mostly services the government.

Thompson, divorced with two adult children, was caught up in one of the fiery wrecks late in the ARCA opener and is at peace with his decision to retire.

“What I really do is I fly,” he said. “What these guys do is drive race cars. I’m not a slacker. I’ve done reasonably well, at times.”