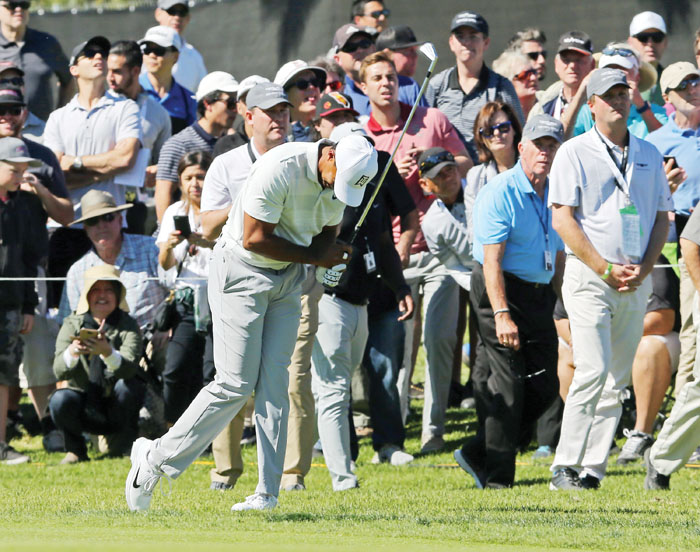 Tiger Woods slams his club after his approach shot from the first fairway rough landed in a bunker at the greenduringn the second round of the Genesis Open golf tournament at Riviera Country Club in the Pacific Palisades neighborhood of Los Angeles on Friday, Feb. 16, 2018. (AP Photo/Reed Saxon)

By DOUG FERGUSON, AP Golf Writer
LOS ANGELES (AP) — Tiger Woods waited 12 years to get back to Riviera and lasted only two days.
Woods had three straight bogeys early on the back nine Friday and didn’t play well enough to make up for his misses. He had a 5-over 76 and missed the cut in the Genesis Open for the first time in nine appearances as a pro.
He was at 6-over 148, one shot worse than his PGA Tour debut as a 16-year-old at Riviera.
“I missed every tee shot left and I did not putt well, didn’t feel very good on the greens,” Woods said. “And consequently, never made a run. I knew I had to make a run on that back nine, and I went the other way.”
Patrick Cantlay ran off three straight birdies toward the end of his morning round, starting with a tap-in on the par-3 sixth when he missed a hole-in-one by a fraction of an inch, and shot a 69. He was tied with Graeme McDowell (66), the former U.S. Open champion who is trying to work his way back from a two-year slump.
They were at 7-under 135.
Sam Saunders also was at 7 under, making back-to-back birdies until it was too dark to continue. He had three holes remaining in his second round. Ryan Moore bogeyed his final hole for a 68 and was one shot behind at 136.
Woods plans to stick around for the weekend because his TGR Foundation hosts the event, one reason he played Riviera for the first time since 2006. Just as his second round was starting, the Honda Classic announced he would be playing next week at PGA National in Florida.
“I need some tournament rounds,” Woods said.
Riviera was tough on everyone with the firm conditions under two days of full sunshine. Woods started on the cut line, and sandwiched a pair of 20-foot birdie putts around a bogey at the par-3 fourth. But there were two stretches where he fell apart.
He came up well short of the green — with the pin in a bowl to the back left — and took bogey on No. 6. From a fairway bunker on the next hole, he hit the lip and the ball caromed off to the side. And with a wedge in hand from 117 yards on the ninth, he put it in a front bunker and dropped another shot.
Then, after a brilliant play off the tee that set up a rare tap-in birdie on the reachable 10th, he three-putted the par-5 11th from 40 feet and the 12th from 80 feet, followed by a pulled tee shot on No. 13 that clanged off the trees and left him a 3-iron into the green instead of a wedge. He pulled that left and made a third straight bogey.
Woods three-putted the 16th from about 25 feet.
During an 11-hole stretch starting with No. 3, he made only one par. He hit good shots, but his game was not nearly sharp enough to atone for far too many mistakes, especially on a track like Riviera.
“I haven’t played golf in years,” Woods said after his third PGA Tour event since August 2015 because of back surgeries. “I’m starting to come back and it’s going to take a little time. I am progressing, I’m starting to get a feel for tournament golf again. I just need to clean up my rounds.”
Rory McIlroy overcame a few short misses on the front nine for a 69 and was at 2-under 140.
“He is very close,” McIlroy said about Woods. “Give him a little bit of time.”
Cantlay was coming off a three-putt bogey when his tee shot at the par-3 sixth — the hole with a bunker in the middle of the green — landed above the flag and to the right, and then rolled back down the slope just over the right edge of the cup.
“I actually missed a little to the right, but it’s a bowl back there so as long as you get the number right, it should be pretty close,” Cantlay said.
He followed with a short iron into 5 feet for birdie, a 15-foot birdie on the next hole and then a wild drive that led to a bogey on his final hole.
McDowell has gone 59 starts worldwide since his last victory and has fallen out of the top 200 in the world. He had missed four straight cuts dating to late last year, though he felt he was hitting it well in practice. What helped was seeing some good scores.
“All I’m missing is a couple little numbers and a little bit of confidence,” McDowell said.
Defending champion Dustin Johnson shot a 69 and gets to stick around for the weekend. He was at 1-over 143. Bubba Watson, who won in 2014 and 2016, has fallen out of the top 200 in the world after a two-year drought. He shot a 70 and was at 4-under 138, and then headed for the NBA All-Star weekend to play in the celebrity game.