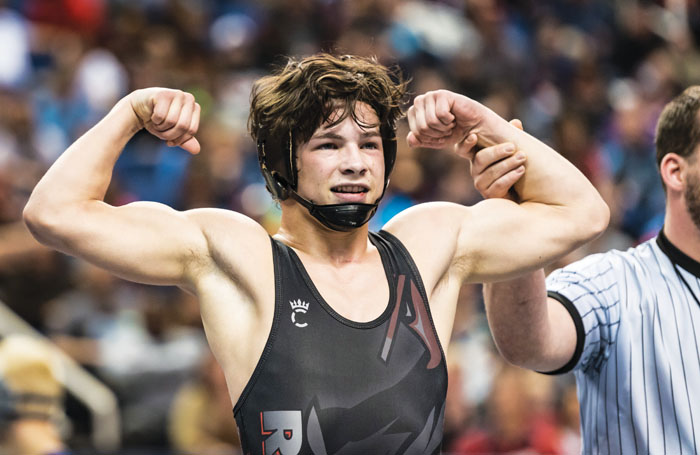 GREENSBORO — Confidence is critical if you’re going to be a wrestling state champion, and South Rowan’s 132-pounder Logan Lambert definitely has it.

Now the positive thinker is a 2A state champion — as a sophomore.

“I was ranked No. 1, but I didn’t let that add any pressure for me in the state  tournament,” Lambert said. “I expected to be on top.”

Lambert finished the season with a 37-1 record. His lone slip came in the Boneyard Bash at Fayetteville’s Jack Britt High School in early January. Lambert lost in that tournament to Holly Springs wrestler Josh Lehr, who took runner-up honors in the 4A state tournament on Saturday night.

“He was tough,” Lambert said. “But you learn from wrestling guys like that.”

Lambert has been committed to wrestling since he was a first-grader, learning the ropes in the local RoCo program.

He made a splash as a freshman at South. Wrestling at 120 pounds in 3A, he placed third in the state tournament. He lost his second match, but then he worked his way through the “wrestle-backs” to earn a place on the podium. He went 33-7 as a freshman.

Nothing short of a state title was going to be acceptable for Lambert this season.  He won a number of tournaments along the way, taking the Rowan County title at 138 pounds, ruling the prestigious Holy Angels Invitational and claiming recent championships in the Central Carolina Conference Tournament and  2A Midwest Regional.

All those wins built confidence and constructed a mindset of winning.

People kept telling Lambert he was going to win again as he headed to the state tournament, but he still had to go out and do it.

“I’m only  a sophomore, but  I wasn’t nervous,” Lambert said. “I’ve been wrestling a long time and I’ve wrestled in some national meets. So I’ve gotten used to this. The big crowds don’t bother me.”

On Mat No. 2 on Saturday, the 565th match of the three-day affair, Lambert passed his toughest test against Wheatmore senior Jared Niemitalo (46-10), the 2A Mideast Region champ.

Lambert made a rare mistake and Niemitalo took him down, taking a 2-0 lead. Statistically, the wrestler who registers that first takedown wins 75 percent of the time, but not this time. It was 2-all after a reversal by Lambert.

“Then there was a stall call that gave him one point,” Lambert said.

Down 3-2, Lambert scored the decisive deuce with another reversal.

“I got the reversal for 4-3, and was able to ride him out from there.” Lambert said.

So how does it feel to be an individual state champion as a sophomore?

“Pretty wild and pretty great,” the 5-foot-8 Lambert said, with a laugh.

Former South star Logan Durham, who became the first Raider to win two wrestling state titles (2014, 2015), was one of the people in Greensboro to cheer on Lambert on Saturday. He helped push him, along with South coaches Nick Golden and Brandon McCarty.

“A lot of people have helped me get here,” Lambert said. “The plan is to win three championships.”

That’s an admirable goal, and Lambert has the confidence to achieve it.

“Right now, all I want is some food,” Lambert said. “For a few weeks, I can eat whatever I want.”