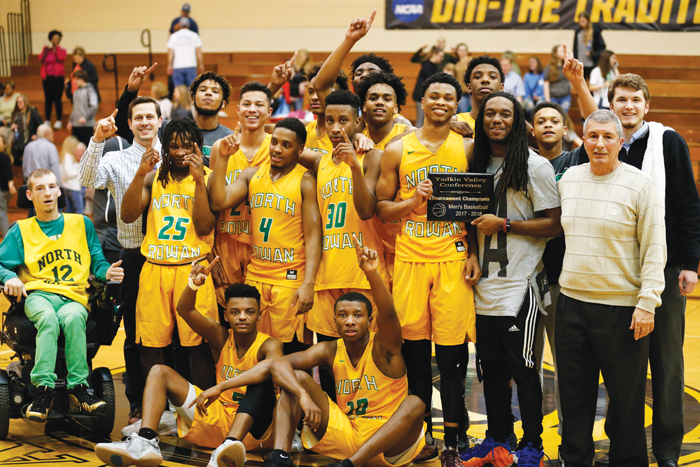 Prior to taking the court, North saw a girls’ game in which a No. 1-seeded team on a long winning streak (Gray Stone) lost to the No. 2 seed (Albemarle) after the top seed won both regular-season matchups.
The Cavaliers, the No. 2 seed on the boys side, did the same thing. They weathered the Comets’ torrid early shooting to prevail and take the title, despite losing twice to North Stanly during the regular season.

Dajuan Clement scored 13 of his 16 points in the second half for North Rowan (17-8), while Dayjuwon Cooke also scored 16 for the Cavs, including 8-of-12 from the free throw line.
Bryson Childress had a big night for the Comets (22-5) with 32 points, including five 3-pointers and 10-of-14 from the foul line.
Jason Doerr added 15 points and Carson Lowder scored 11 for the Comets.
The Cavaliers survived an early storm from the Comets, who hit six 3-pointers on 11 chances in the first quarter, building a six-point lead over the Cavaliers.
North Stanly maintained the lead but a Nick Colson 3-pointer with 3:22 left in the second quarter pulled the Cavs to within four points, 29-25, at halftime.
The Comets led by as much as seven points in the third quarter before the Cavaliers got within one possession. Clement scored seven points in the third period and a Brevin Goodlett steal and dunk in the final seconds of the period got North Rowan to within 42-41.
Trailing, 44-43, with 7:25 left in the game, the Cavs started connecting from outside and the foul line for a 9-0 run.
Goodlett’s 3-pointer with 5:02 left put the Cavs up, 55-46, but North Stanly had one more run left. Over the next two minutes, the Comets scored 11 points in a row, with Lowder’s bucket at the 3:01 mark giving North the lead back, 57-55.
Derrick Page’s 3-ball from the left wing put North Rowan back up, but Lowder drew a foul for the Comets and tied the game, hitting 1-of-2 free throws.
Page answered with a left-side drive to the basket and layup putting North Rowan ahead by two.
After Childress was fouled on a drive and missed two free throws, David Broaddus drew a foul seconds later and sank both shots.
Doerr got North Stanly within a point with an old-fashioned 3-point play with 27 seconds left on an offensive rebound and stick-back.
Cooke drew a foul with 19.8 seconds left and hit one free throw. North Stanly came down looking to tie the game but an errant pass went into the backcourt for a violation.
The Cavs led by three points on another Cooke free throw, and after a Comets’ timeout, Childress took one last shot from 30 feet, over a double team, which fell short.
“I thought in the second half, we got out on the three-pointer shooters and did a better job on Childress,” North Rowan head coach Bill Kesler said. “When we were up eight, I didn’t think the game was over. I know Childress can hit the three and drive the ball well. He’s a tough matchup for anyone to play.”
Kesler also talked about winning close games, including three of the Cavs’ last four games.
“These kids have been through a lot,” he added. “They have learned how to win games at the end, how to finish games.”
The NCHSAA state playoff pairings will be announced on Saturday.