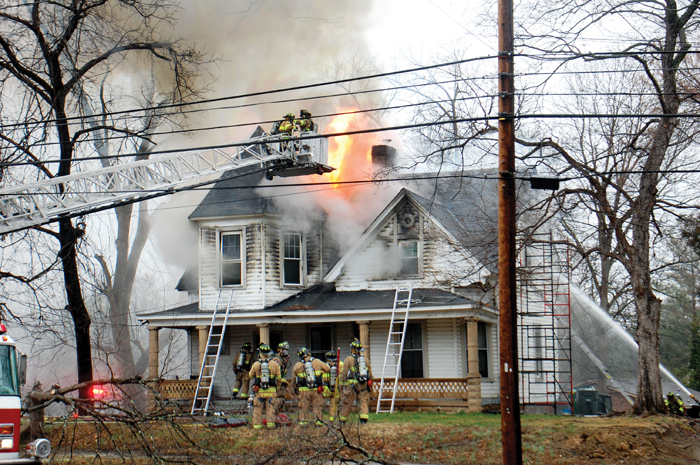 “It makes me cry,” said Karen Hobson, executive director of Historic Salisbury Foundation. “Just when we’re making some progress on North Main, something like this happens.”

Salisbury Fire Department responded about 3 p.m. Saturday to the structure fire at North Main and West Miller streets. It proved to be a stubborn fire that prevented firefighters from making entry for a considerable period as flames flared through the second story.

Two ladder trucks were put into action with others on hand.

Smoke cascaded into the neighborhood as many nearby residents took videos of the working fire, whose cause was not immediately known. North Main Street traffic was detoured in this area for several hours.

The house’s new owner, Ricky McSwain of Cherryville, was in Texas on business and learned about the fire by telephone.

Hobson said McSwain had been making good progress on his restoration of the home, which the foundation sold to him last year.

“He’s a craftsman, which is a double loss — to have the perfect person to buy that house,” Hobson said.

The house dates back to 1900, when it was built by C.L. Emerson, considered to be Salisbury’s first oil dealer.

Bonnie Emerson and her son Ike Emerson donated the house to the foundation in December 2016. Bonnie’s husband and Ike’s father, the late Maj. Gen. Jim Emerson, had owned and rented this house for several decades before his death earlier that same year.

“I’ve always said I’d like to have that house,” Darrell Privett said as he watched firefighters work from across the street. Privett has done his own restoration work in this same neighborhood and said it was a shame to see the fire cause this much damage.

Kathleen Tronsor, who lives about a half-mile away on North Caldwell Street, smelled the smoke from her house and came to investigate. She said her mother was a firefighter in Arkansas.

Like many others, she used her cellphone to video the fire.

A man who lives on Long Ferry Road said he was driving by on North Main Street before the Fire Department arrived and thought he saw the house was on fire. He didn’t immediately trust himself.

The house is considered a good example of late Victorian architecture. It has an asymmetrical design with a steep gabled roof and turret. Fluted stone columns support the front porch.

The National Register of Historic Places considers it a “pivotal” structure within the North Main Street Historic District.

C.L. Emerson moved to Salisbury from Ohio to work for both Standard Oil Co. and the Indian Refining Co. He later shifted his work to real estate ventures, and he built three other houses in this 1000 block of North Main Street.

In a bit of irony, it was an electrical fire at this same house in the summer of 2016 that persuaded Ike Emerson, who was heading off to college, that the house required a new caretaker. He and his mother later decided to donate the home to the foundation so it could be preserved and a new owner found.

The foundation recently took ownership of a fire-damaged, boarded-up home on the other side of North Main Street in the same 1000 block.