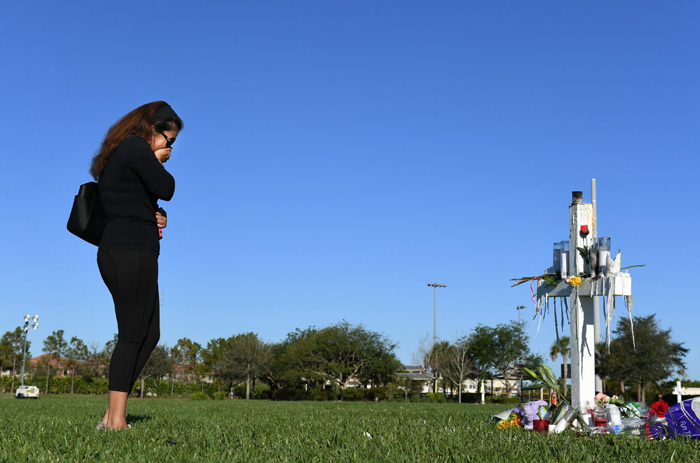 Katiusca Dulski cries as she visits a makeshift memorial in Pine Trails Park for the victims of the Marjory Stoneman Douglas High School shooting victims on Friday February 16, 2018 in Parkland, Florida. There was a cross in the park for each victim. MUST CREDIT: Washington Post photo by Matt McClain

By Mark Berman and Matt Zapotosky

PARKLAND, Fla. – FBI investigators failed to act on a warning that 19-year-old Nikolas Cruz might attack a school, ignoring a concerned call the bureau received just weeks before Cruz allegedly carried out a shooting rampage at a high school in South Florida on Valentine’s Day, the FBI said Friday.

The disclosure came two days after police say Cruz gunned down 17 people, most of them teenagers, at a high school in Parkland, Florida. The FBI — already facing intense scrutiny for its handling of political matters — described a Jan. 5 tip from “a person close to Nikolas Cruz,” a tip officials acknowledge should have initiated a response. The caller reported concerns about Cruz’s “gun ownership, desire to kill people, erratic behavior, and disturbing social media posts, as well as the potential of him conducting a school shooting,” the FBI said in a statement.

“Seventeen innocent people are dead, and acknowledging a mistake isn’t going to cut it,” Scott said in a statement. “An apology will never bring these 17 Floridians back to life or comfort the families who are in pain.”

The country’s premier law enforcement agency has come under criticism for its handling of an ominous message posted on YouTube last fall that indicated a user going by the name of “Nikolas Cruz” wanted to be a school shooter. Though the FBI investigated that tip, it didn’t connect it to Cruz until after this week’s massacre. Authorities in South Florida have been sharply questioned about why they did not act sooner on Cruz’s history of unnerving, sometimes violent behavior, including a long line of incidents at local schools he attended.

As funerals began in a community mourning those killed at Marjory Stoneman Douglas High School, and as President Donald Trump visited an area hospital and the Broward County Sheriff’s Office on Friday night, spending much of his time congratulating the responders, officials pledged to investigate what went wrong with the tip that the FBI received six weeks earlier.

“It’s one of the most horrific crimes in the history of America,” Howard Finkelstein, a public defender in Broward County for the past 40 years, said in an interview before the FBI’s statement. “Everybody was on notice. Every system should’ve been alerted, and not one of the systems did one thing. … This should not have happened, and it didn’t have to happen.”

Attorney General Jeff Sessions said he ordered his deputy attorney general –the No. 2 law enforcement official in the country — to review the bureau’s handling of the matter of the mishandled tip.

“It is now clear that the warning signs were there and tips to the FBI were missed,” Sessions said in a statement. “We see the tragic consequences of those failures.”

The Jan. 5 tip about Cruz came in to the FBI’s general call line, where personnel process thousands of calls each day, some of them more serious than others. When the process works, the call taker records information from the tipster, runs basic database checks on the person at issue and — if the matter appears serious enough — passes a package to agents in the field.

The warning about Cruz should have been passed to the local FBI field office in Miami, but “these protocols were not followed” and no further inquiries were made, the bureau said in a statement. A call operator reported it to a supervisor but the warning never made it any further, according to a law enforcement official who asked not to be identified.

The bureau knew the identity of the tipster — an adult — and the tip involved a threat to life, meaning it should have been taken seriously, said a federal law enforcement official.

The tipster did not describe an attack plan with a time and place but did provide specific information on Cruz, including warning signs, two law enforcement officials said. The officials said the bureau is still exploring why the information was not given to agents for investigation. Authorities do not believe call volume was the reason it fell through the cracks.

“We are still investigating the facts,” Wray said in the statement. “I am committed to getting to the bottom of what happened in this particular matter, as well as reviewing our processes for responding to information that we receive from the public.”

Broward County Sheriff Scott Israel, who is leading the investigation, said he “didn’t think anybody could say” the shooting could have been averted if the FBI acted on the tip. Israel said responsibility for the shooting rests with one person: “Make no mistake about it, America, the only one to blame for this incident is the killer himself.”

Israel said at a briefing Friday that he hopes members of the public will continue alerting law enforcement when they see suspicious activity.

But news of the fumbled FBI tip was fueling anger throughout South Florida, with many residents wondering if the rampage was avoidable. Michael Campion, who lives in nearby Deerfield Beach, said authorities should have at least tried to figure out what was going on with Cruz, who legally owned an AR-15 assault-style rifle and was known to be trouble.

“They chose not to do anything, and someone dropped the ball,” said Campion, 62, noting that he doesn’t know if further investigation might have stopped the attack. “Someone should be held accountable and lose their job.”

Sessions said the deputy attorney general’s review of how the FBI handled the tip also would broadly assess how the department responds in such cases.

“This will include possible consultation with family members, mental health officials, school officials and local law enforcement,” he said. “We will make this a top priority. It has never been more important to encourage every person in every community to spot the warning signs and alert law enforcement. Do not assume someone else will step up — all of us must be vigilant. Our children’s lives depend on it.”

A day earlier, the FBI had defended its response to a different tip about Cruz, a warning that came from a Mississippi bail bondsman who told agents in September that a YouTube user with the handle “nikolas cruz” had commented on a video, “Im going to be a professional school shooter.” In that instance, the FBI said it could not identify the person who left the comment, though officials now believe Cruz posted it.

The FBI’s admission about the tip in January made the Parkland shooting the third time in as many years that a mass shooter who terrorized Floridians had come to the bureau’s attention beforehand, a fact sure to increase scrutiny of how the FBI monitors potential threats.

After a man gunned down 49 people at the Pulse nightclub in Orlando in 2016, the FBI said it had previously investigated him after he talked about extremist connections, but the agency concluded he was not a threat. A man charged with killing five people at the Fort Lauderdale airport last year had walked into an FBI office weeks earlier and made bizarre, albeit nonthreatening, statements.

Former FBI Assistant Director Ron Hosko said that while the bureau is inundated with tips — some of which do not need to be acted upon — he was “sickened” by the agency’s failure to act on the information about Cruz in January.

“This is the unthinkable,” Hosko said. “When you’re talking about ‘see something, say something,’ and somebody with clear and convincing, detailed information sees everything and says everything, and then it goes nowhere, it is very, very damaging.”

The FBI’s statement on Friday was the clearest sign yet that Cruz’s behavior triggered alarm in those around him. People who knew Cruz said he had a violent past, made threatening comments and lived in a home that was frequently visited by police cruisers. Police have received about 20 calls for service in recent years regarding Cruz, according to Israel, the sheriff.

In the two days since the Parkland massacre, officials have been asked what, if anything, the country would do to keep its children safe after yet another school shooting, while campuses nationwide have been on edge amid copycat threats that spread on social media networks and forced lockdowns. The Parkland shooting raised fears that even when school authorities know a student might be disturbed and are on the lookout — as they were for Cruz — even spotting the person on his way into the school isn’t enough to thwart an attack.

Police say Cruz admitted that he walked into the school that had expelled him and fired bullet after bullet into classrooms and hallways on Wednesday. When the gunfire ended, 14 students and three staffers were dead and more than a dozen others were injured, some critically.

Israel told reporters Friday that so far, police have no reason to believe Cruz was targeting specific people at the school. Cruz was expelled from Douglas for disciplinary reasons, school officials said, though they did not elaborate. Investigators have recovered electronic devices that told them more about Cruz, Israel said, though he declined to elaborate. Police are still working to learn why the shooter did what he did, the sheriff said.

Local residents said it would take a long time before things return to normal.

A Broward County Public Schools spokeswoman said no decision had been made regarding the building where the massacre occurred.

Finkelstein, Cruz’s public defender, said the Douglas shooting is “devastating,” noting that his two adult children went to school in South Florida. He said the shooting will leave Broward County “changed forever as a result of this.”

Finkelstein argued that Cruz should be spared a potential death sentence for one of the country’s deadliest school shootings because of all the missed red flags that marked his path back to Douglas.

“What a jury is going to have to answer for themselves is whether we as a community, when we as a village, ignore every sign, every scream for help from a sick child who eventually falls off the grid and does what we feared he would do, do we forfeit our right to kill him?” he said.

Finkelstein said Friday that Cruz would plead guilty if the state agrees not to seek a death sentence in the case. A spokeswoman for the State Attorney’s Office in Broward, which is prosecuting him, said it is too early to discuss whether officials would seek a death sentence.