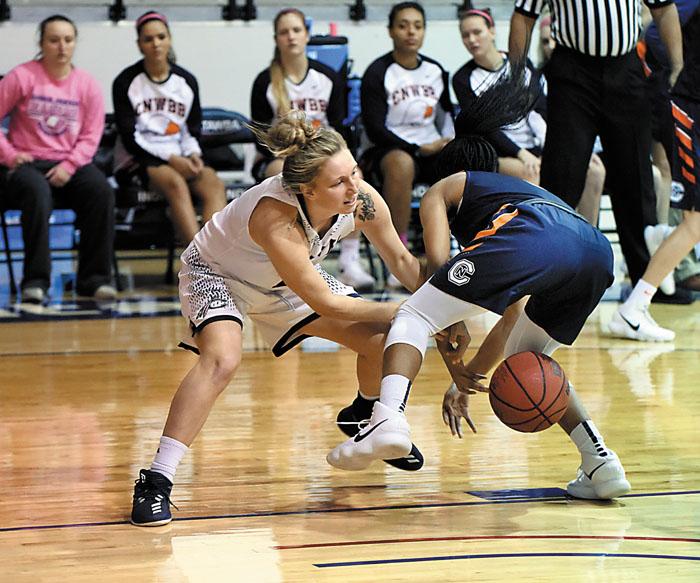 Wayne Hinshaw/for the Salisbury Post ... Catawba’s Madi Hallman (11) fights for the basketball, as it slips away from a Carson-Newman player.

SALISBURY — Catawba senior women’s basketball players exited the floor, one by one, with 3 minutes, 30 seconds left.

The applause was polite,  friendly and warm, especially for standout guard Serena Brown, but the game was one the Indians will try hard to forget.

Playing without senior post player Terri Rogers (knee injury) and freshman guard Shemya Stanback, Catawba was bludgeoned badly by nationally-ranked Carson-Newman. The final score was 80-49, but it probably could’ve been 100-49 if the Eagles hadn’t pulled back their pressure defense. In the first half, Catawba turned it over 15 times. The Eagles netted 23 points directly from those miscues.

There’s a reason Carson-Newman is ranked third in Division II. Mostly this was just really unlucky scheduling for Senior Night.

Catawba’s problems started with turnovers. Catawba got down quickly, 8-0. After six minutes it was 19-3 and pretty much over. Halftime: 51-27.

Catawba shot 22.4 percent from the field, so there was no way to generate any sort of comeback. Catawba shots, a lot of them pretty good looks, rolled off the rim at an alarming rate in the third (2-for-18) and fourth quarters (3-for-16).

Carson-Newman showcased two of the league’s best players — long, deceptively quick forward Mika Wester (20 points) and fast, sharpshooting guard Haris Price (17). Everyone else was solid and did their jobs.

It was the final home game for Rogers (third in the SAC in scoring and fifth in rebounding) and for Morgan Franklin, Brianna Hodges, Marshauna Butler, Alexis Newbold and Brown, the five Senior Day starters. Brown, who averages 12 points, didn’t score until late in the third quarter.

Freshman Talia Barnes did a pretty fair impression of Rogers in the first half, with repeated athletic stick-backs, but she got only one of her 14 points after halftime.

Elizabeth Webb and Kaitlin Stevenson made 3-pointers in the last minute to lift Catawba’s final points total to 49.