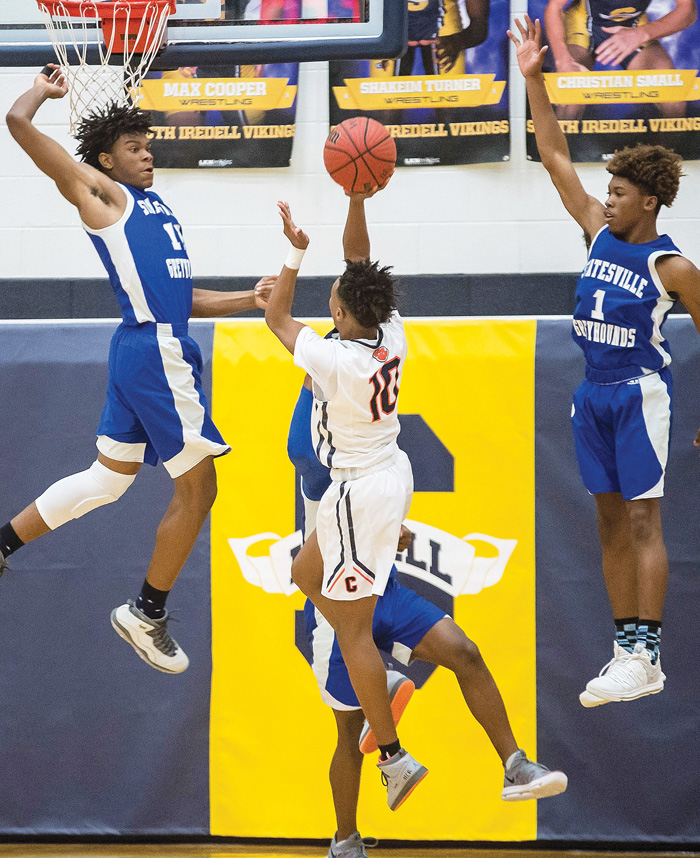 TROUTMAN — It wasn’t a work of beauty, only the work of champions.

That’s what the Carson boys basketball team can call itself after a 69-61 victory over Statesville in Friday’s foul-infested North Piedmont Conference Tournament final. In a game that had no rhythm, no flow, no rhyme or reason, the Cougars left the party at South Iredell High School clutching their first trophy.

“We won the battle,” senior Owen White said, after Carson (23-2) secured its eighth straight win and an attractive seed in next week’s 3A state playoffs. “You go out there and put your heart on the line and play as hard as you can. No one is just going to give you a championship. You’ve got to go out there and take it.”

The top-seeded Cougars did — despite losing White and Jamarius Hairston, both of whom fouled out in the tension-filled fourth quarter — and junior Cole Perry, who suffered a sprained left ankle while driving toward the basket two minutes into the second half.

“We overcame a lot of adversity tonight,” said Brian Perry, the only coach in Carson’s 12-year history. “That makes it a great win. A tough win. A physical win. When you overcome so much, it just makes it sweeter.”

Never mind that for 32 minutes, this one tasted like sour milk. Statesville (15-11), winner of four straight games and nine of its previous 10, went 6-for-22 from the free throw line. Carson also misfired 16 times, but finished 32-for-48. Six players fouled out, including four of Statesville’s starting five.

Things got so bad that Scofield, the longtime Statesville coach, actually turned his back to the court while senior Izaiah Gathings bricked a pair foul shots early in the final period. “I didn’t want to watch,” he said. “Sometimes when I do that, they make them.”

There was no miracle in the making for the third-seeded ‘Hounds. Carson opened a 31-20 lead when Cole Perry yanked down an offensive rebound, then elevated for a layup with 2:10 remaining in the first half. Statesville answered with a three doorstep layups and drew within 32-26 at the break.

“We never could pull away,” said Coach Perry. “I called a timeout after we went up 10 in the first half. We wanted to extend that, but they hit like three in a row and just hung around. The same thing happened in the second half.”

It was more of the same after the intermission. Both teams played with sputtering engines — seemingly stuck in second gear — until Carson senior Jamarius Hairston took a pass from Jailen Williams and launched a 22-foot jump shot from the top of the key that caught nothing but nylon. It refueled the Cougars’ bench, their orange-clad cheering section and provided a 52-42 edge with 1:38 remaining in the third quarter.

“We call it a flip,” Hairston said, moments after netting 20 points despite sitting out eight minutes with foul trouble. “Jailen drives it hard to the middle and flips it back to me. I’m the trailer on the play. It’s a shot I work on and have to knock down.”

It was the third and final 3-pointer for Carson — a gunboat of a team that averages nearly 10 per game.

Williams, meanwhile, kept his nose clean and played the entire match. The backcourt maestro spent much of it running figure-8’s around Statesville’s bewildered defense — circling along the perimeter and baselines, penetrating the lane when he could and melting the clock with some smooth-as-jazz ball-handling down the stretch. He scored 10 of his game-high 23 points in the fourth quarter — two on a floater down the lane and eight from the free throw line.

“Jailen is an extremely smart player,” said teammate Cam Prugh. “He controls the game. He just knows how to do that.”

He found a way — even on a night when his teammates veered a little off course before winning the race.

“It’s good for us to win all these different type of games,” Perry said. “It’s good to win when when we hit 10 threes. It’s good to win when (Mike) Gurley’s over there running the flex over and over again and we have to grind it out defensively. And it’s good to win games like tonight, where we got in foul trouble, and it’s really, really physical, and we had to battle for everything we got.”

No, it wasn’t a thing of beauty. But in the big picture, it’s another beauty mark by a championship team.