Burhannon’s bucket wins it for Livingstone, 80-79 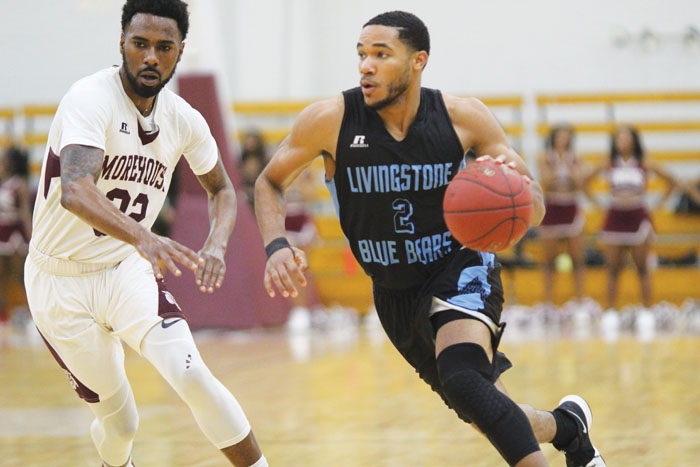 SALISBURY — It’s only mid-February, but the Livingstone men’s basketball team played like March madmen on Saturday.

The fifth-place Blue Bears — of all teams — stood up and said ‘No Way’ to CIAA Southern Division leader Johnson C. Smith, snatching an 80-79 victory on Cameron Burhannon’s 14-foot jump shot with 5.1 seconds remaining.

“It’s a shot I’ve worked on all of my life,” Burhannon said, at New Trent Gym, where Livingstone (9-12, 7-7, 3-5) snapped a three-game losing streak in dramatic fashion. “The way I was being guarded, it was the perfect scenario to use that move, a crossover step-back. I knew it was good before I let it go. It’s one of those moments you live for, that you’ve dreamed about since you were a little kid playing in your driveway.”

Burhannon, a 6-3 senior from Indianapolis, couldn’t have scripted it better. Livingstone trailed by a point and had just regained possession when coach James Stinson signaled for a timeout with 21.2 seconds on the clock.

“Cam asked for the basketball,” Stinson said. “I’m sure everyone thought the ball would come inbounds to Roger (Ray), so that was part of why we agreed. It was a good idea and a really good shot.”

Burhannon eventually got the ball near the left elbow, where he was well-defended by former North Rowan standout Michael Bowman. To create space, he stepped backward toward the Livingstone bench and calmly threaded the game-winning shot.

“We thought the little guard was going to shoot,” said JCSU coach Steve Joyner, Sr. “We had (Burhannon) covered and didn’t expect him to get it. But he did a good job separating himself from Mike and got a good look at the basket.”

Bowman, the last player to leave Smith’s dressing room, was obviously subdued. “He just made a really clutch shot,” he said. “It happens.”

Burhannon shot 8-for-12 from the field and finished with a team-high 22 points. Teammate Ramel Belfield (19 points, 10 rebounds) had a double-double and hit five 3-pointers — including three in a row during a 77-second Livingstone uprising in the second half. When Ray connected from long range a minute later, the Blue Bears had a 61-53 lead with 11:59 to play. It grew to 65-55 when Burhannon buried a 12-foot turnaround jumper from the left side, midway through the second half.

“The last time we played them it looked like Roger was playing by himself,” said Belfield, referencing Ray’s 29-point game in a Jan. 24 loss. “All he needed was a little help from the rest of us. We got the hot hand from Cam. He designed the play and asked for that moment. If we keep making shots like that, we’ll be hard to beat.”

The game was not without controversy. With 4.2 seconds hanging on the first half clock, JCCU (17-9, 10-4, 7-1) inbounded the ball, raced down court and bricked a long shot off the backboard. Problem was, the game officials neglected to start the game clock and no time elapsed. Following a discussion and a Smith timeout, the Golden Bulls were awarded possession at mid-court with 1.1 seconds to go. This time they inbounded to 6-7 Arthur Bennett, who rattled in a shot at the buzzer that gave the guests a 37-36 halftime edge. The significance? JCSU had been 12-0 when leading at the break.

“The officials got caught up in the moment,” Stinson said. “They said it was three dribbles and the shot. I said, “Yeah, but y’all didn’t start the clock.’ They said, ‘Don’t worry, coach. We got this.'”

Camouflaged in the excitement was an impossible-to-ignore effort by JCSU senior Robert Davis, the CIAA’s leading scorer. He knocked down five 3-pointers and netted 18 of his game-high 28 points in the second half. But the Golden Bulls — losers of two straight following a school-record nine-game winning streak — missed 17 free throws (27-for-44) and coughed up a 79-76 lead in the last minute-and-a-half.

“We didn’t deserve to win tonight,” Davis said. “Missed too many free throws and gave up the big shot at the end. That was a great, turnaround shot. He must have practice it a lot.”

Must have. On his driveway, years ago. Only this time his mother and three junior college friends from Grand Rapids, Mich. were on hand to bear witness. When the final horn sounded, Livingstone fans stormed the court, frat brothers burst into their strollin’ routine and a sense of relief swept over the under-the-radar Blue Bears.

“Well-needed. Past due,” Belfield said, amid the celebration. “We came together and finally played the way we know we can play. Sometimes we beat ourselves, but not tonight.”

NOTES: Bowman contributed three points and four rebounds in 19 minutes for JCSU. Teammate Malik Ford, another North Rowan graduate, was in uniform but did not play. … Davis was averaging 21.6 points-per-game before tipoff. He’s scored in double digits in 37 consecutive games. … Retiring CIAA head of officials Jim Burch was honored at halftime for 50-plus years of service. He was the first African American to officiate in the Atlantic Coast Conference. … The Blue Bears shot 44.6 percent from the floor and made 11 of 24 three-point attempts. … LC closes its regular season with road games at St. Augustine’s Wednesday and Winston-Salem State next Saturday. The conference tournament is scheduled for Feb. 26-March 3 in Charlotte.